of the winter. Everything at present is dry and clean, and the yellow crocuses are coming up all over the ground. General Pennyfather is come back to us, and I hardly know which felt most pleased to see the other, he or us. He is a brave old man, and is thoroughly loved by every officer and soldier in his Division; we are as proud of him as he is of us. He was obliged by sickness to go away at Christmas, and after passing a couple of months in Malta and Italy, by which his health is much improved, like a noble fellow, he has returned to his post. Our Regiment was inspected by him two days ago, and he complimented us very highly both on our appearance and drill. As to the first, the men have all got their new coats, and we now keep everything well pipe-clayed as if we were in England or at Gibraltar. And as to the drill, we were ourselves surprised at doing it so well, as neither officers or men have had any for six months, and half the men were young recruits lately come out. We were about 510 of all ranks on parade, a strength that very few Regiments in the Army here can number. He also inspected the 41st, 47th and 49th, whose numbers nearly equal ours..... We have had a strong report for the last three days that the Emperor Nicholas is dead. We, of course, hope it is true, as it may facilitate the negotiations for peace, so much desired. The firing on both sides still continues, however, and our labours in completing our batteries with shot, &c, is unremitting. All is ready to open on the town a much stronger fire, if possible, than that of the 17th of October. We now have many more guns and batteries than we had then.
J. Granville Harkness”

The number of deaths in the Scutari hospital from Jan 1st to 31st was 1,482. Well might Brazier in his letter say “with death around me”.

Paragraph from the Penny Press of Jan., 1855

Some hopes and reflections naturally suggest themselves on the opening of a New Year — and the present one is eminently calculated to excite these feelings. There are anxieties and prayers which may at the present time be said to be national. Our country is engaged in a war which may be glorious or fearful in its issue to us; and the many calamities which invariably attend the struggle of arms, — the sacrifices required from a nation in the shape of taxes, and other fiscal imposts, and the sufferings of the poor from the depression of commerce and the dearness of provisions, are only to be ameliorated by that Power whose mercies are as boundless as his Being.Differ as we may on other subjects, from one end of Great Britain to the other, unanimity may we trust be found in one hope and sentiment — that Heaven may aid us in our just struggle against aggression, liberty, and right: for —

“ Breathes there a man with soul so dead,
Who never to himself hath said —
This is my own—my native land!”

“The Light Cavalry Charge at Balaklava”
Published in the Hastings News, Feb. 9th, 1855, and signed “Katie”

“They said they were warriors for feast and for hall,
The victors of women, the heroes in wine,
But fit for the stars of the court and the ball,
And meet for the hour in revel to shine

“To wear the gay trappings, the charger to rein,
To grace the procession they said they were made;
To lead the mock skirmish of peace o’er the plain
And glitter the first at a brilliant parade. 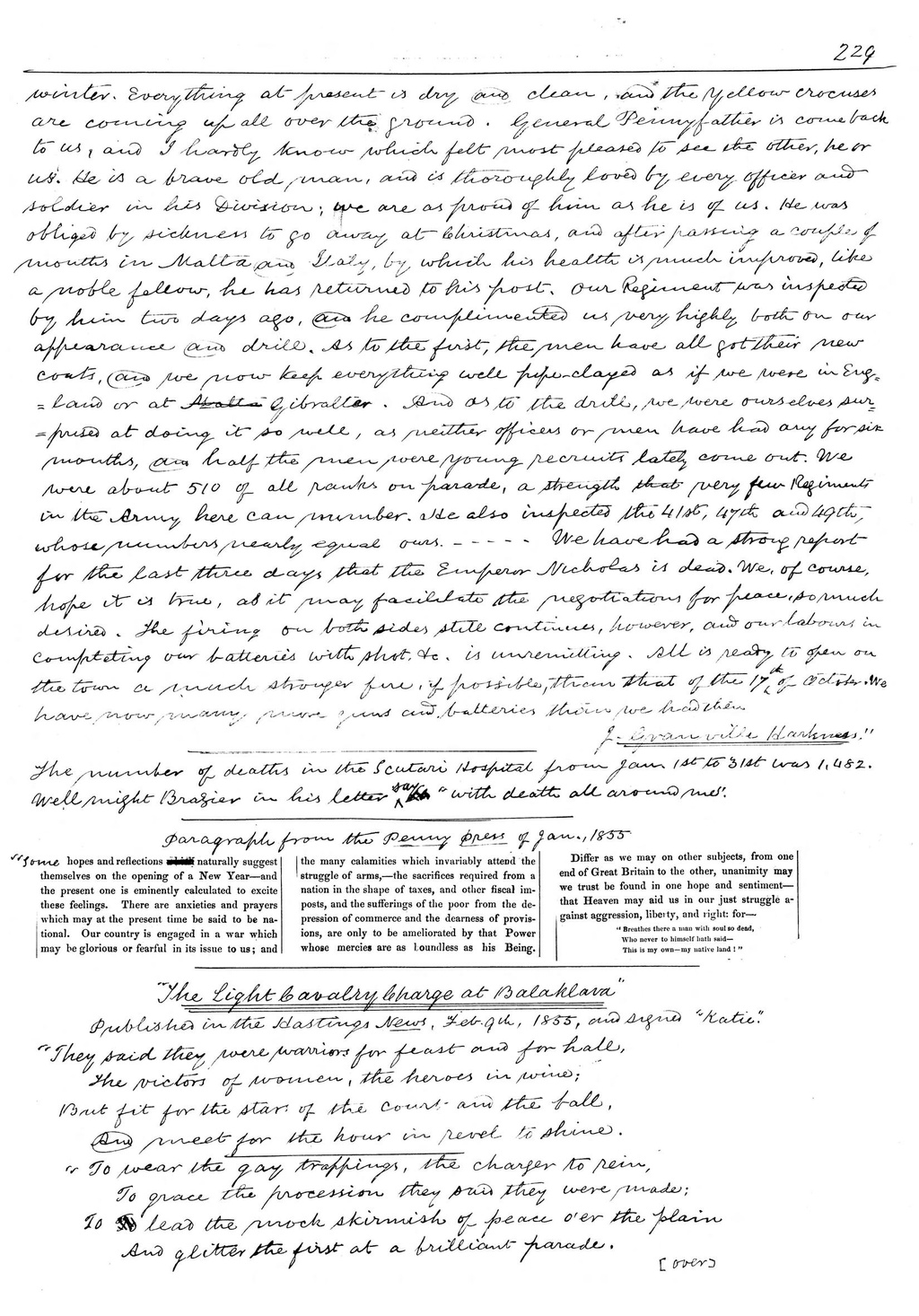