a half-yearly proof of its social being by the visits of another gentleman with a cheque-book, with some formidable claim coupled with the phrases “special and general district rates”, though we never obtained any very decided comprehension as to the distinction between the special and the general. Generally the bill was a heavy one and it was a very special case if it happened to be a light one. However, as money was spent, we concluded that it was spent on something; and when we pondered on the phrase ‘Local Board of Health’, we concluded that if ever the burial of the dead came under the cognizance of the Board, the Board would be found ready and powerful to deal with a matter so seriously affecting the health of the living. However, we are almost deprived of this consolatory delusion. It appears that if this said Council ever did do anything, it means to do nothing for the future. It will neither drain the borough, supply it with water, nor bury its dead. In fact, the Town Council, Local Board and all – Mayor, Aldermen and Councillors, appear resolved to retire from business in toto! Seeing that the Burial Board has just done the same thing, perhaps we ought not to be surprised. Were it not for magisterial proceedings, the Town Hall might as well be disposed of by public auction, the borough having no further need of its accommodation. If we are to drain our houses ourselves, get our water from Mr. Charles Clark, and bury our dead by resolutions in vestry, surely we can make-shift without the Public Health Act, and its administrators altogether.”

“Who Stops the Ways?”

“Show’ry April, May the dewy,
Soon will yield to sunny June;
Fierce July, with dust and thunder,
Next will yield the burning noon,
Give us water, worthy Council,
There is plenty, people say;
But, alas! we cannot get it;
Who is it that stops the way?

“Lo! Her Majesty in Council
On our churchyards turns the key,
But, of course, we’re not possessing
Actual immortality.
We shall die, oh, worthy council,
You should bury us, they say,
But you do not see to do it;
Who, then, is it stops the way?

“When the water taps are rusty,
When the doctors push and drive,
When the dead can scarce be buried ,
Then you’ll have to look alive.
Then you’ll get in anxious bustle,
And in eager haste will say
‘T’wasn’t us who did the mischief
Mr. Someone stopped the way.’

“He it was who said the water
Would be plenty all the year;
And that need we not to trouble,
Seeking water, far or near,
He it was who checked the drainage,
He who bade the Council say
They would not be borough sextons;
He it was who stopped the way.” 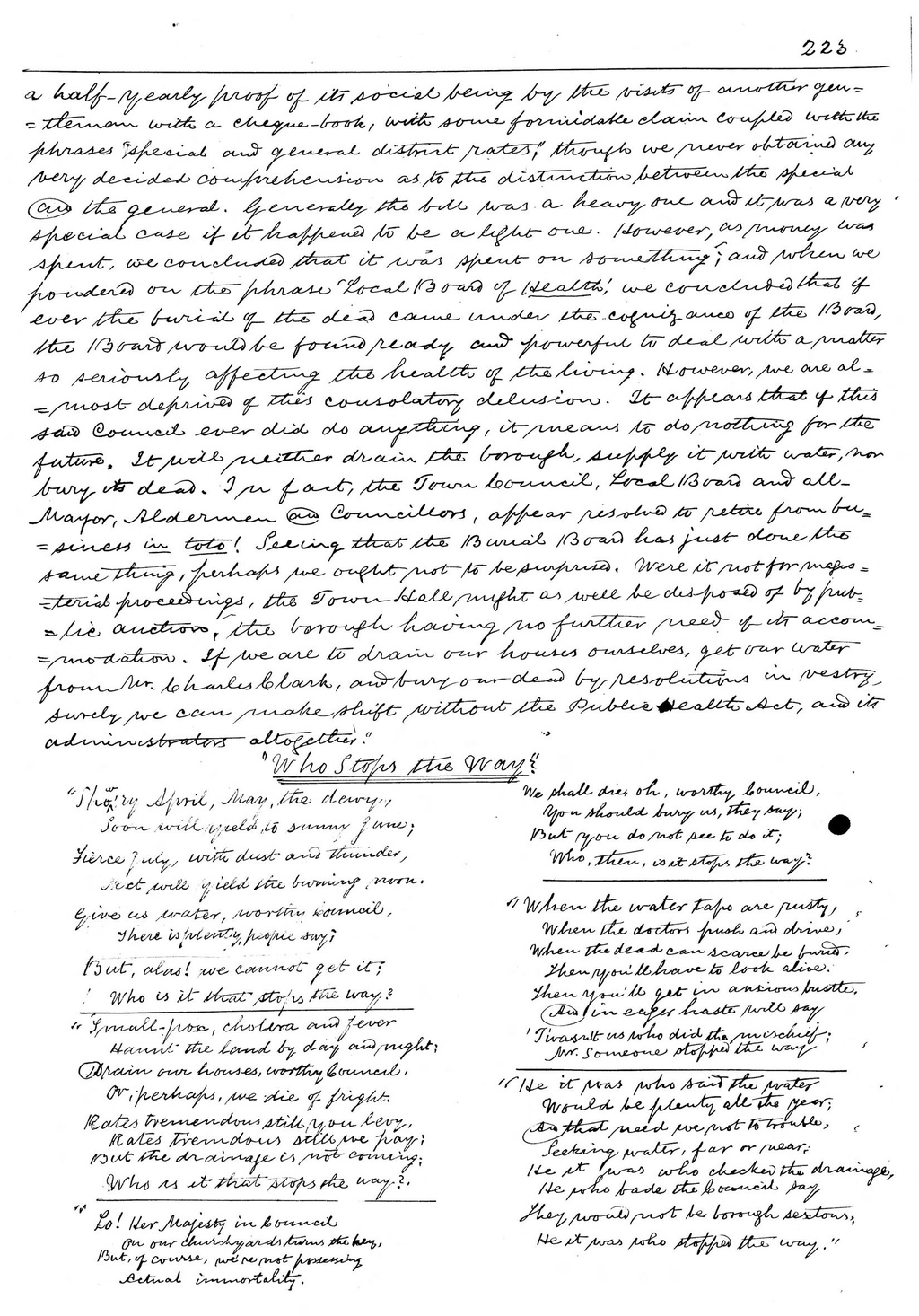