not having a share in the public plunder? Have all their efforts been directed to the overthrow of one despotism simply for the purpose of setting up one of their own ten times more tyrannical? It is a favourite objection with some that men will always be influenced by their prejudices and that it is a folly to make a stir about what cannot be prevented. . . . I admit there is a speciousness in this objection, inasmuch as it contains a statement that is to be deplored and cannot be defended. We may not be able to eradicate it altogether, yet we may prevent its becoming all powerful. What I complain of is that these prejudices instead of being regarded as things to be deplored are actually flattered and fostered; and are themselves professedly and designedly made the controlling motives of selection; and by these party combinations have all the power given them which unity always brings . . . A word, in conclusion on the H.I.P.S.; and let not my position be misunderstood. I am myself of the same political party, and have therefore no reason apart from what I am about to mention, why I should have any enmity against them or should refuse to combine with them for the legitimate objects which they profess to have in view. Unity gives strength to every cause, and I can see no reason why the strength of unity should not be applied to the advancement of political interests as well as to any other, provided these organizations keep to their objects. But as long as we see this H.I.P. society, instead of keeping to its proper sphere as a political society, applied to give strength to one of the lowest prejudices by which the mind can be influenced, and turned into one of the most destructive and obtrusive meddlers in the affairs of almost every public body or institution, in the borough, so long, I consider it the duty of every man who values the peace and interest of the said borough – be he Radical or Tory – to do everything in his power to destroy their pernicious influence. And I believe, sir, this is but the echo of sentiment held by members of others of their polical(sic) friends. I remain yours truly,
Anti-Strife Hastings, 21st Nov., 1855.”

The H.I.P.S. – some of whom were members of the Town Council – were severely and justly criticised for doing too much, whilst the Council, as a whole, were accused of doing too little; and the same journal which called the former to account for their excess of duty, complained of the latter for their comparative immobility in matters that were urgent. Under the head of “The Do Nothings” the News of the 11th of May had a leading article, from which the following is an extract:-

“Until very recently we laboured under the happy delusion that we had a Town Council which did something for its money. We had a quarterly proof of its existence by the visits of a cheque-book, under the plea of collecting money for certain waterworks. We also had- 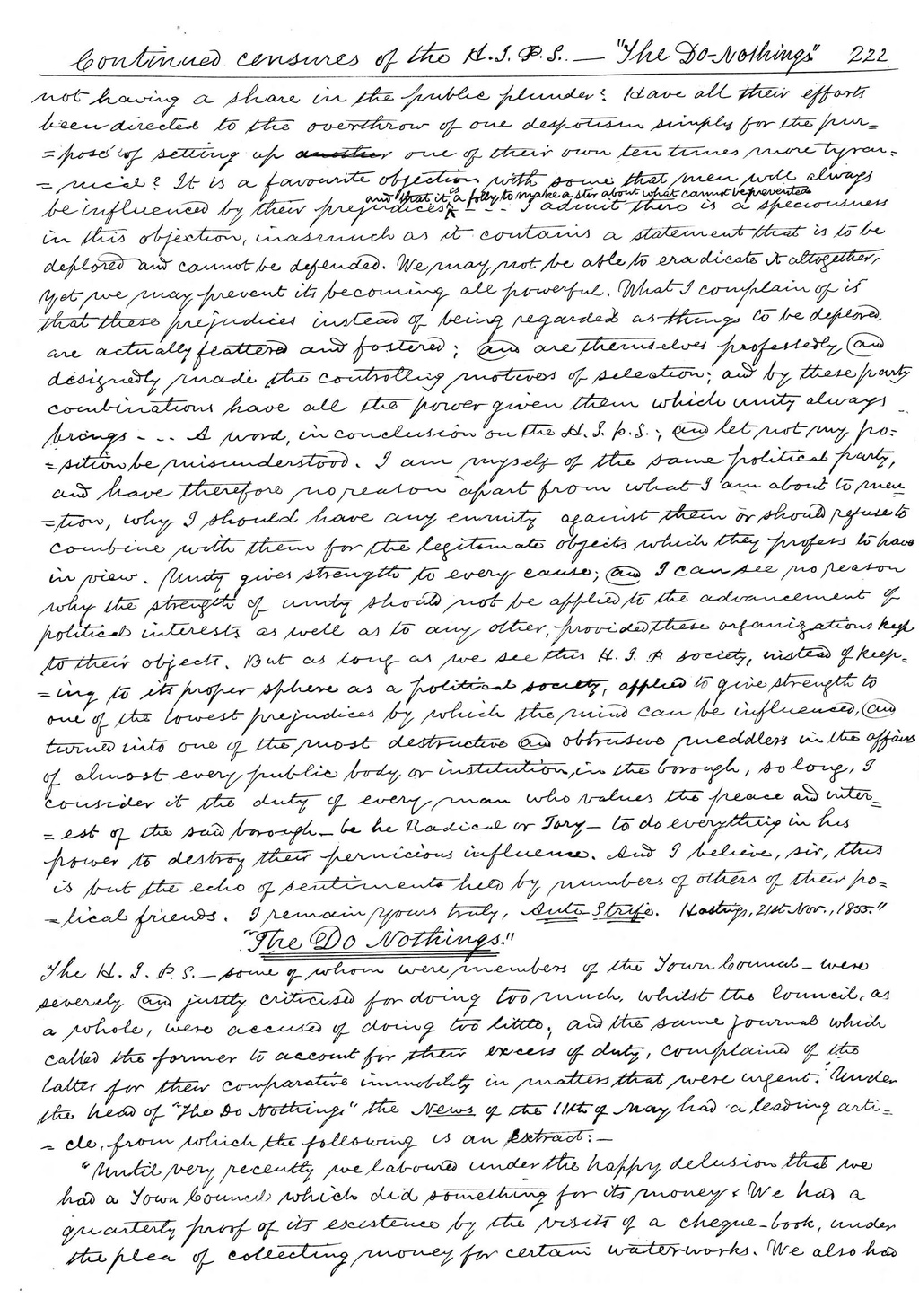