News of Nov. 23rd. concluded thus:- “Now that we have awakened so many of the people to a correct appreciation of the improper influence exerted by secret political societies in municipal affairs, we can safely leave that part of the business to our able correspondents who have so energetically taken up the subject. We have little fear now of the influence of the ‘Independent Political Society’ obstructing our intended efforts for an improved state of feeling in our local elections. If that society would keep its footing at all, let it show its wisdom by taking our advice to prove itself exactly what its name implies – a political club; not a municipal inquisition.”

From among numerous letters to the News the following few are selected:-

“Dear Sir. Permit me to express my very cordial sympathy with you in the agitation you have commenced against the abominations of our municipal elections. It is quite time the citizen electors were admonished that the social and commercial interests of the town are quite independent of all political questions and parties. I sincerely hope that you will persist in the advocacy of the principle that municipal officers are not to be bought and sold at the price of adhesion to a polical(sic) club; but are the trusts of a people reposed in trustworthy men. Until this principle be avowed and acted upon in the election of Councillors it is utterly useless to expect the affairs of the town to be conducted in a broad and generous spirit. May I add, I have very great pleasure in knowing we have at last a local paper which holds and dares to utter an independent opinion.”
“I am, sir, yours, &c. A Resident and a Radical.”

“Mr. Editor, I beg to tender you my thanks for the manly and independent animadversions in the leaders of the last two numbers of the News. Like many other residents of this town it has long pained me to see politics so largely infused into local matters, and I have watched with no little apprehension, the workings of the secret society which is at the bottom of all this. A contemporary suggests the formation of another society as a counterpoise to this body. Having read something of the deeds of the ‘Jacobins’, the ‘Santa Fedisto’, the so-called ‘Reform Patriots’ and other of the Continental secret societies, (and knowing a little of the doings of the ‘Ribbon Bands’ and how easily in these secret societies power and control pass from moderate to unscrupulous hands. I would strongly urge the greatest caution before such a step is taken. As the members of all secret bodies invariably make everything subserve the interest of their association, might not the case be met by a declaration on the part of municipal and other authorities in the town that they will- 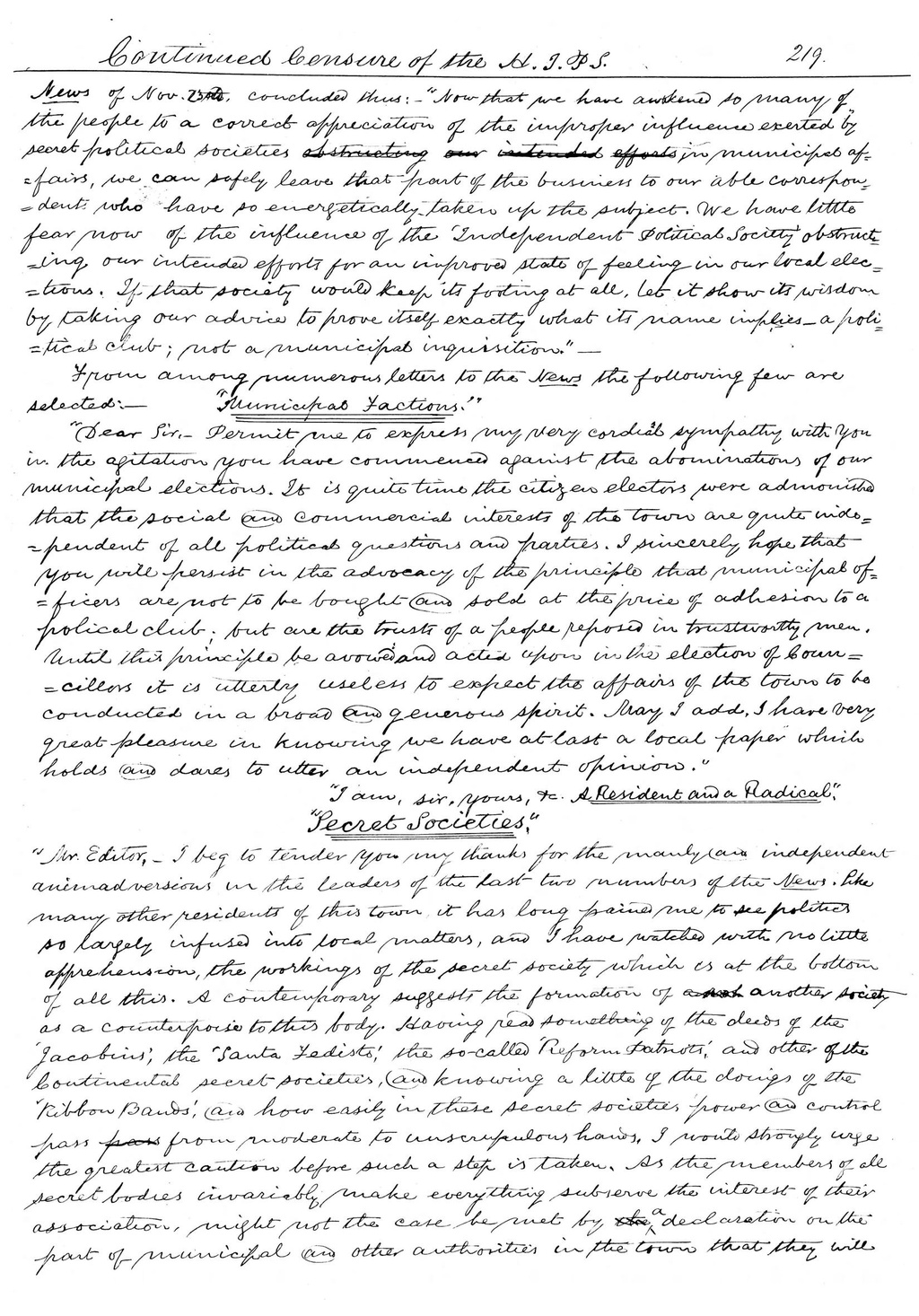