that the sentiments therein were perfectly justified and were prompted by an honest desire to curb what was becoming a “reign of terror” not only to avowed political opponents but also to many of the temperate and thoughtful Liberals. Anyone who reads between the lines – to use a modern phrase – can see that the anger of a certain faction calling themselves (erroneously) the “Hastings Independent Political Society” or in briefer form the “H.I.P.S.” not only aimed at having the sole prerogative to rule the public affairs of the town, but were positively spiteful against those who objected to their overbearing action. Apart from its manly advocacy of right principles on behalf of a community whose general interests it ably supported, the News had good reason to give a home thrust to that section of Radicals who not being able to make use of it for their own purposes, called it “The Rag” and endeavoured to belittle it by writing or dictating articles in a Brighton paper and a Lewes paper certain articles which were both untruthful and defamatory. These, however, got a Roland for their Oliver from the News itself in one or two special notices, which will be quoted if I ever write – as I have been asked to do – the History of the Local Press. Although espousing in my own person, Liberal political principles, I followed the same line of independence as did the News, and when in the month of June the Act came into operation for legalising unstamped newspapers, I became a responsible journalist by the publication of a weekly paper in addition to that which was previously published monthly. From the printed statement “Politics Liberal” it may have been thought that the Gazette would be more likely to yield to certain blandishments than did the older News, with its stereotyped profession of “Neutral in Politics”. But it was not so. True, the word “Independent” in the title of the Society had some attraction for me, and I consented , after some hesitation, to become a member, paying a small subscription for the same. My first and only attendance at a meeting was in the new room at the Royal Oak. I soon discovered that I had been hoodwinked, and that instead of being independent, I was expected to submit to the will of a faction. I objected to the putting a man “in a hole”, as it was called by agreeing to elect him as an assessor, to prevent his becoming a candidate for the Town Council. I was told that the other side sometimes did the same, and when I replied that two blacks did not make a white and two wrongs did not a right, the rejoinder was that I had “yet a good deal to learn.” I declared I should never learn what was meant, and with that I left the room. On reaching home, I wrote to the gentleman who had asked me to become a member to disenroll my name. For that honest resolve I was tabooed by the party, and as a journalist, was denied that which as a native and the publisher of a local paper, I considered myself entitled to. This incident of a personal nature is referred to by way of support to the quoted article of the News.

In another leader on what may be called Political Overbearing, the Hastings 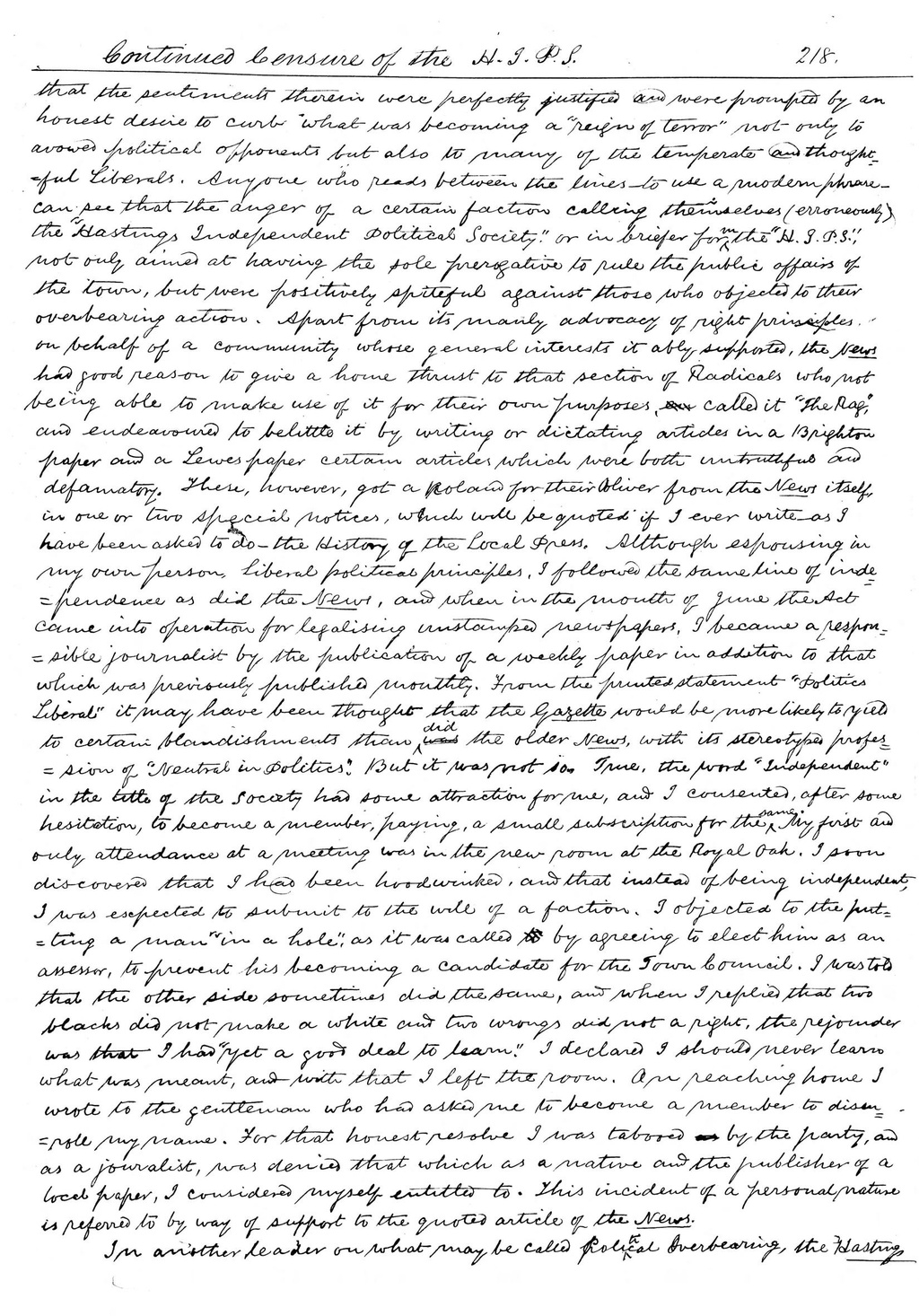