ability of many of the men who have been so nominated to the offices which they fill. By no means. We asserted that the rule of election was a wrong one. The men in our service may be fit for the work; but we ask that we may have a guarantee in the shape of a right principle of choice that a proper fitness is look(sic)for in them. We want to feel secure, and not to be at the mercy of any political motives that may be influencing those in whom the power of choice may be vested. That was our argument. Let us hear what has been said about it. It was urged that we did not make this objection when the Conservatives had the municipal ascendancy. And why did we not? Because the days of that ascendancy were well nigh numbered before our journal was well alive. Let any other party than the one at present ruling do the same things as this has done. Let it secretly organise; and, forgetting its rightful and exclusive province, become a sort of civic Inquisition in the borough – and our townsmen will soon see if we spare that party more than we have spared this. But, further. On what plea was the Conservative party worked against, until it was brought into a minority? (We speak of our civic affairs, not of the state of parties in the fair field of politics) Was it not the plea of corruption – the charge of putting favourites into the good places? And is it right in those who urged that plea to commit the same offence? And because, forsooth, we could not rebuke the failings of past offenders, we must not whisper too loudly the frailties of present directors of our municipal conscience! Our doctrine is that no party ought to introduce political intrigues into our local business; and on this ground we take our stand, grumble at us who will.

‘Hail Independence! – by true reason taught,
How few have known and prized thee as they ought?
Some give thee up for riot; some, like boys,
Resign thee in their childish mood for toys;
Ambition some, some avarice misleads,
And in both cases Independence bleeds.’

It has been said that we have personal friendships to serve by adopting our present course of action. This we deny in the strongest and most unqualified manner. Nobody would have made this assertion but for a conscious paucity of better arguments to defend his cause. Some meet us by crying ‘Why all this fuss about so simple a thing?’ It always has been so, and ‘always will be’. If it always has been so, it does not follow that it ought to have been; nor is it certain that the evil is incurable. We hope otherwise. We trust that the burgesses of these towns will think for themselves, and will learn to act on really independent and noble principles. We are no believers in the incurability of either social or political wrong. At all events, if we see an evil and acknowledged it to be so , we are bound to try to cure it. It were nobler to have tried and failed than to have smiled it into stronger life. If the guilt of- 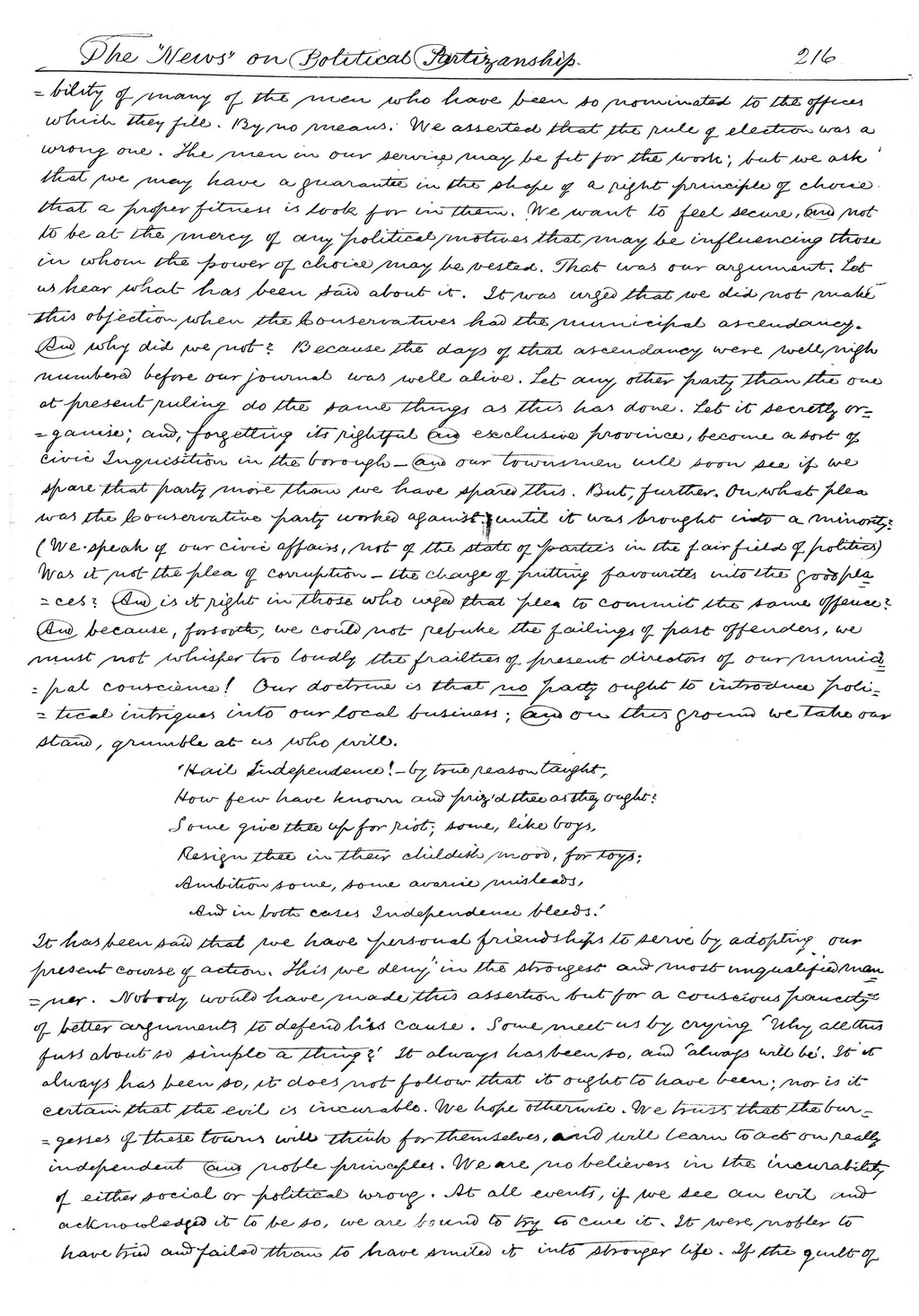