son to know; and we ask of our readers a few moments’ patience and a little candour whilst we examine some of the grounds of this indignant anger. But before we enter upon these, we have a word of explanation to give of the remarks we have already made in this article. It may appear to some that we are complaining of a want of sympathy with our views, and are giving expression to our disappointment. Not a bit of it. A party spirit which misinterprets everything that is not congenial to itself may possibly so pervert what we have here said. The fact is that we have found a more general approval of our attack on a time-honoured custom than we had reckoned upon. We knew human nature too well what awaited us in some quarters. We knew how partizanship would start up alarmed and make personal applications where only general principles were inculcated. We were prepared for the imputation of unworthy motives by those who felt the force of our statements, and could not wriggle out of their difficulty without first raising a cloud of calumny, behind which to effect their escape. We had looked for all this – we had counted the cost and well weighed the penalties of independence and the risk of boldly speaking out. The experience of man has ever taught this truth – in all ages and in conexion with with all subjects, that he who would think freely and speak openly must expect to be vilified and hated by those whose errors he has pointed out or whose public blunders he has tried to correct. Social and municipal excision, the secret malediction of the political bigot, the frown of those who are at ease in power and don’t like to be disturbed, the shy dislike of the timed slave of faction and the fiercer malice of the bolder one:- these, we were well aware, were among the penalties which some minds would inflict on independence. But as we believed, we spoke, and will speak again. Much as we shrink from giving unnecessary pain to any man, especially to those who in private life we respect, and with whom we may sympathise in their legitimate political labours, no personal considerations shall keep us silent when we see so many public offices and emoluments systematically used as reward-gifts for faction to play with. We are fully conscious of the unthankfulness of our task and the magnitude of our work. We expect to find Whately’s dictum - of not a few – that ‘Many a one is so far gone in party as to be proof-proof, and cares no more for facts than the Leviathan does for spears.’ It is not enough to believe what you maintain, but you must also maintain what you believe, and maintain it because you believe it.

The Liberals of this town as a body, we trust are liberal, but some of them – those who in the name of the body just now rule supreme in these towns – have rather illiberally accused us of many grievous sins, for simply asserting what is almost a truism, that men ought to be put into local berths for their fitness rather than for their political creed. Not that we disputed the suit- 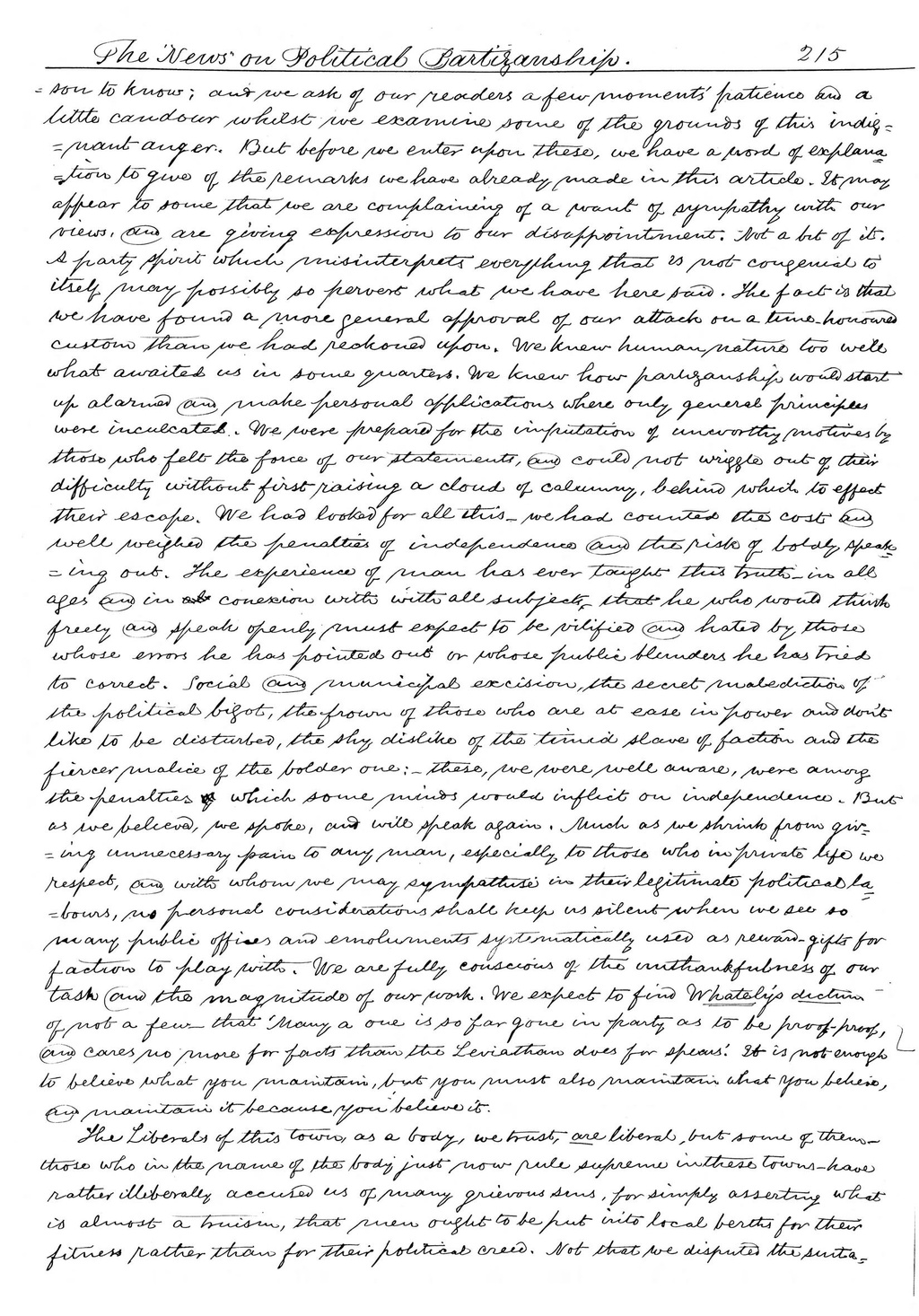