by some of its exponents was never more arrogantly dominant. This exercise of autocratic power was properly exposed in a professed independent Liberal journal and its correspondents, some of which exposition is here reproduced. The Hastings and St. Leonards News of Nov. 16th, 1855, in an editorial article said:–

“Partizanship has its advantages and independence its penalties. The partizan, if he gets warmly cursed by one faction, is sure to be as devoutly blessed by another. He is certain of having friends somewhere and of getting a good word from somebody. The man of independence is not so sure of having friends or a good word; and if in relying on general report, as he sometimes must, he is unlucky enough to make one mistake, that is sufficient to shut all interested eyes against everything he utters that is correct. He speaks the truth; and men who have not lived the truth, think him personal, and vilify the speaker. He exposes shams; and men who have risen by shams, and whose pretensions to reality of conviction are consciously hollow, fancy themselves exposed, and straightway shew where the arrow was shot at a venture, has struck, and revile the hand that sent it. He finds generally that to be sure of support he must utter a party speech or rely on some party deed. Partizanship appeals to men’s passion and always finds a ready response; whilst independence and impartiality have to wait for an auditory till men’s passions cool and the subsidence of their tempers permit them to see with clearness. Had we in our remarks last week, on “Local Factions” taken a strong party view, and proclaimed the political and municipal purity of one faction to be vastly superior of the other, we should, of course, have seriously offended one class of politicians, but another class would have been just as much pleased. We should have been certain of securing decided adhesion from at least one faction; but we flattered nobody. We exposed a system in which every party has in? – when enjoying its turn of power – a system of conferring municipal and other local honours as rewards for political services – a system of employing political tests for the discovery of a man’s fitness for civic office. This exposure has given satisfaction – a placid quiet satisfaction – to many who believe we are right, but who will not bestir themselves to shew what they believe. People of this stamp fail to do what they see they ought to do, they lack moral nerve to act out their convictions. They would faintly cheer whilst others fought the battle of freedom, but would keep their own swords sheathed in the strife. It has given intense pleasure to some who form the nucleus of a class that shall, in due time deliver the local government of those towns from the ruinous influence of party domination. These are men of various political tenets – men who hold that a political struggle has a better and more honourable arena than the Council Hall or the private committee-room. Our exposure has done much more than this. It has brought upon our head the anger of some of ‘leaders’ of the party that happens now to be in the ascendancy in the municipal affairs of the borough. Not the anger of all the party, be it remembered; but of the more zealous and active among them. Many belonging to that party see with us, and lament that excessive partizanship of their friends as heartily as we do. That we have sadly offended several, however, we have good rea- 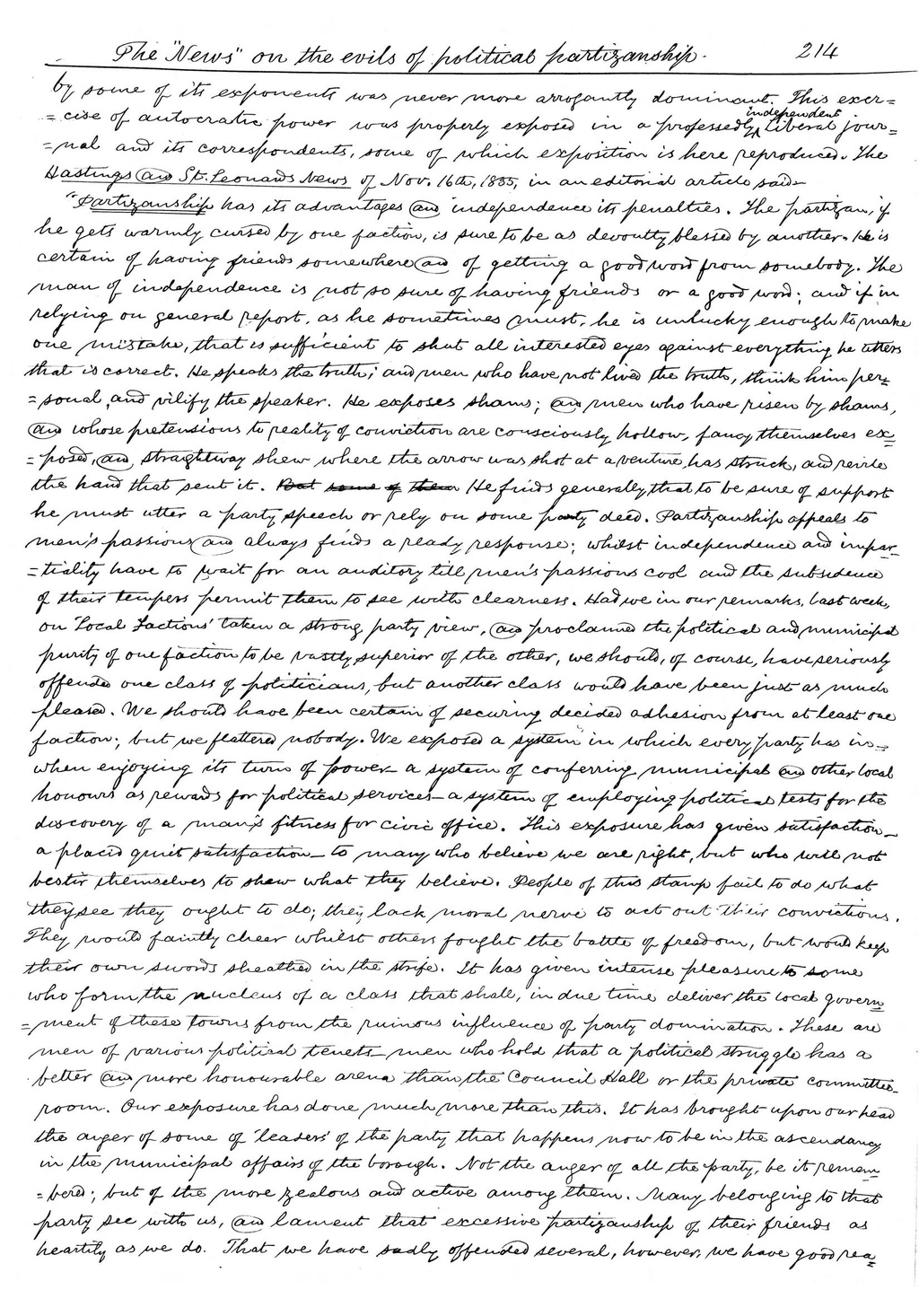