assiduous if you elect me, as a Councillor. I am, &c. Alfred Vidler. Sen.”

This lengthy address – different in style to Mr. Vidler’s oral pronouncements – was thought by some persons to have been prepared by Alexander Payne or Henry Morley, two reporters for newspapers not printed in the borough, but even if that were the case, it could hardly have detracted from the genuineness of the address, so long as it embodied the sentiments of the candidate. Those sentiments, however, did not seem to accord with Mr. Vidler’s action and admissions respection the cemetery question and some other public matters, in which he showed himself not so free from “party and personal interest” as indicated by his addres.(sic). Also his intimacy with Messrs. Ross, Clift, Smith and other leaders of a secret and overbearing political club known as the H.I.P.S. – of which more anon – and the help derived therefrom both in the canvass and at the poll, did not bear out his profession of independence. Perhaps Mr. Winter, the later and unsuccessful candidate, was of that opinion when he issued what many Liberals considered to be a more genuine address, as follows:-

“Gentlemen, - One of the four outgoing Councillors of this Ward having declined to present himself for re-election, I beg to offer myself to your notice as a candidate for your suffrages on the 1st of November next. As a native of this town, and being bound by every tie with its interest and well-being, it will be my desire, if favoured by your choice is to devote what abilities I possess to the forwarding the general good of the entire borough. I shall watch and endeavour to control the expenditure of the public funds, so that it may prove the means of increasing the comfort and convenience of the visitors and inhabitants generally. I consider a wise expenditure better than a false system of economy – the latter burdening the present ratepayers to an undue excess, whereas the former, if spread over a series of years, lessens the rates and at the same time improves the town. On one point only will I pledge myself, viz., to oppose strenuously, constantly, and to the utmost of my power, any and all attempts to enhance the interest of one part of the borough to the detriment and at the expense of the other portion. As I do not approve of canvassing or in any way of interfering with the elective franchise, I leave myself in the hands of the burgesse’s for election or rejection; but beg to say that should you honour me with your confidence, it will be my pride and constant aim so to fulfil the duties of the office as to justify the choice you make. I have the honour to be, Gentlemen, your humble and most obedient servant, Henry Winter. 59 George Street.”

On the day of election the poll closed with 263 for Gutsell, 251 for Williams, 233 for Vidler and 64 for Winter. The rejection of the last-named candidate was, undoubtedly due to three causes – the lateness of his address, the determination not to canvass, and the boasted “industry” of Mr. Vidler in soliciting votes, assisted by members of the H.I.P.S. That Mr. Winter was a Liberal went without saying, but that he was a Liberal at that time of a more independent stamp than his rival was shewn by his address. That he was also intellectually superior to Mr. Vidler those who knew them both would have no doubt. Partizanship in local politics was never more bitter than at that time, and a few subsequent years, and Radicalism,- 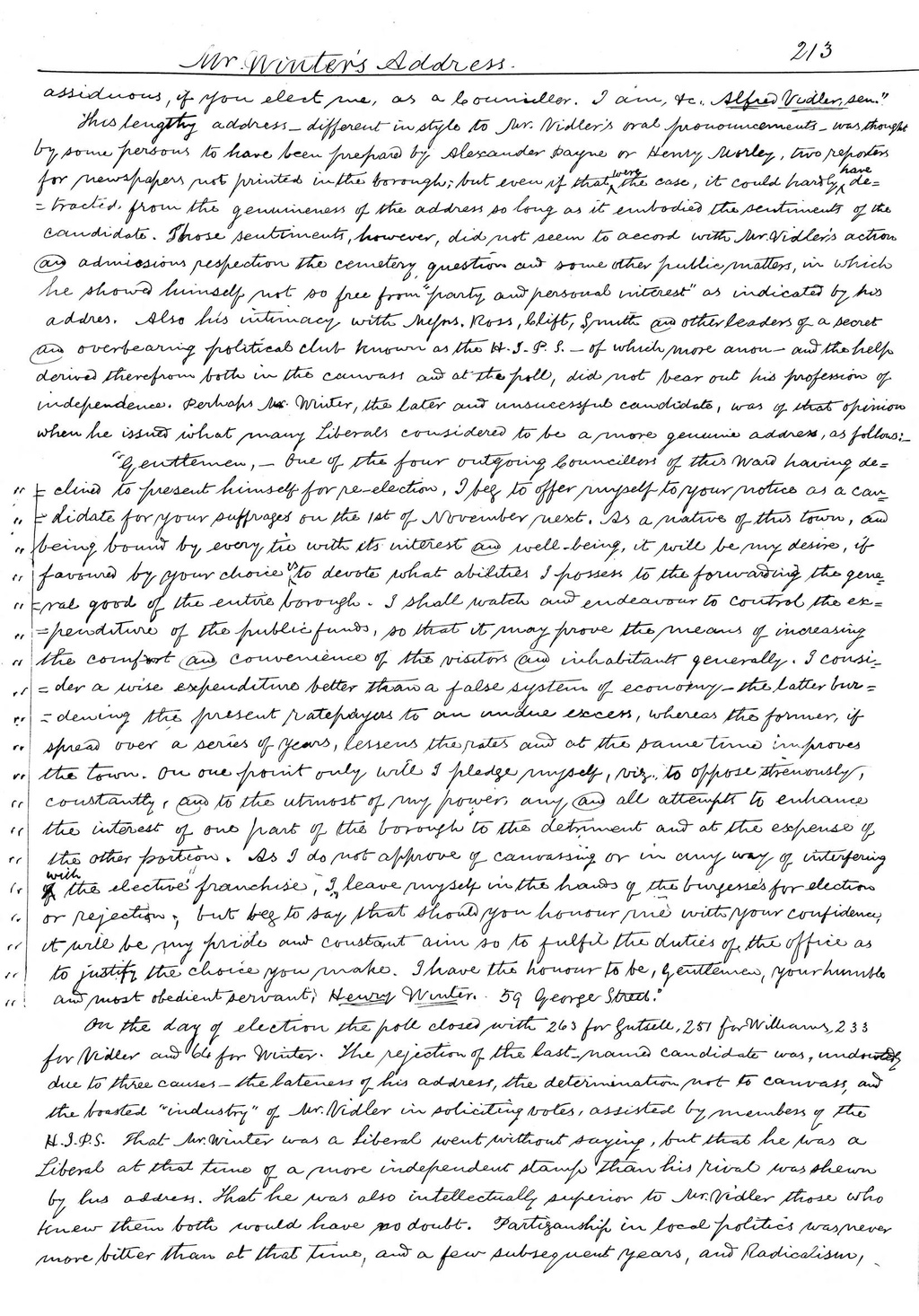