was written in 1855, the writer’s averaged rest in 24 hours did not much exceed five hours, proof of which existed in a daily record; and since that time it has not been increased. It may be truthfully affirmed that from about ten years of age until over 82 he never has had more than the stated averaged amount of sleep; and as he has mentally exercised himself even while at meals, and he has never taken a fortnight’s holiday, he submits that he is entitled to the boast – with all its unblushing egotism – of having lived the exceptional working life of 140 years. Whether the ability to make two working weeks out of one was a gift of Nature or was acquired by force of habit, it may be adduced in support of the Jesuits’ physicians’ contention that for some men, at least, six hours is abundant. “Use” says the aphorism, “is second nature,” and if this particular cause and effect is to be practically demonstrated, it must be commenced in early life. Also, if my own experience is worth anything, the daily round of labour should be varied, the change of employment being better than actual rest. As my autobiography, though often asked for, has but a small chance of being written, it must be the excuse for occasionally interposing some personal experiences, and in this particular instance for what may be regarded as a sequal(sic) to the metrical “Invitation to Early Rising” in chapter XXXIX, Vol. 3. ]

The Woods and Forests’ Commissioners having declined to give the triangular site in Robertson street for a church mainly for the inhabitants and visitors on the Crown land, the Rev. G. D. St. Quintin, of St. Leonards, offered to purchase from the Cornwallis estate one acre of land in the Step Meadow, for a church, parsonage and schools, and was himself willing to give £500 towards the whole cost on condition that the patronage should be vested in the Bishop of the diocese, and that he himself should have the selection of the incumbent during life. The Bishop was also willing to give £500. The Countess Waldegrave, with her usual liberality, had promised £500, with the probability of another £500, at her own discretion. About £500 was expected to be obtained from other sources.

For this proposed church, the trustees of Lady Julia Cornwallis offered half an acre of ground, at a very small sum, where stood an old tree (among others) that had been stripped of its bark by lightning behind the original Priory-farm house, and in the Step Meadow, commencing at and including the wooden cottage by the roadside, and terminating a little above the steps. The offered site was where are now Cornwallis Gardens and the Central Wesleyan Chapel. This site was abandoned, as will be shewn in Chapter LVI. 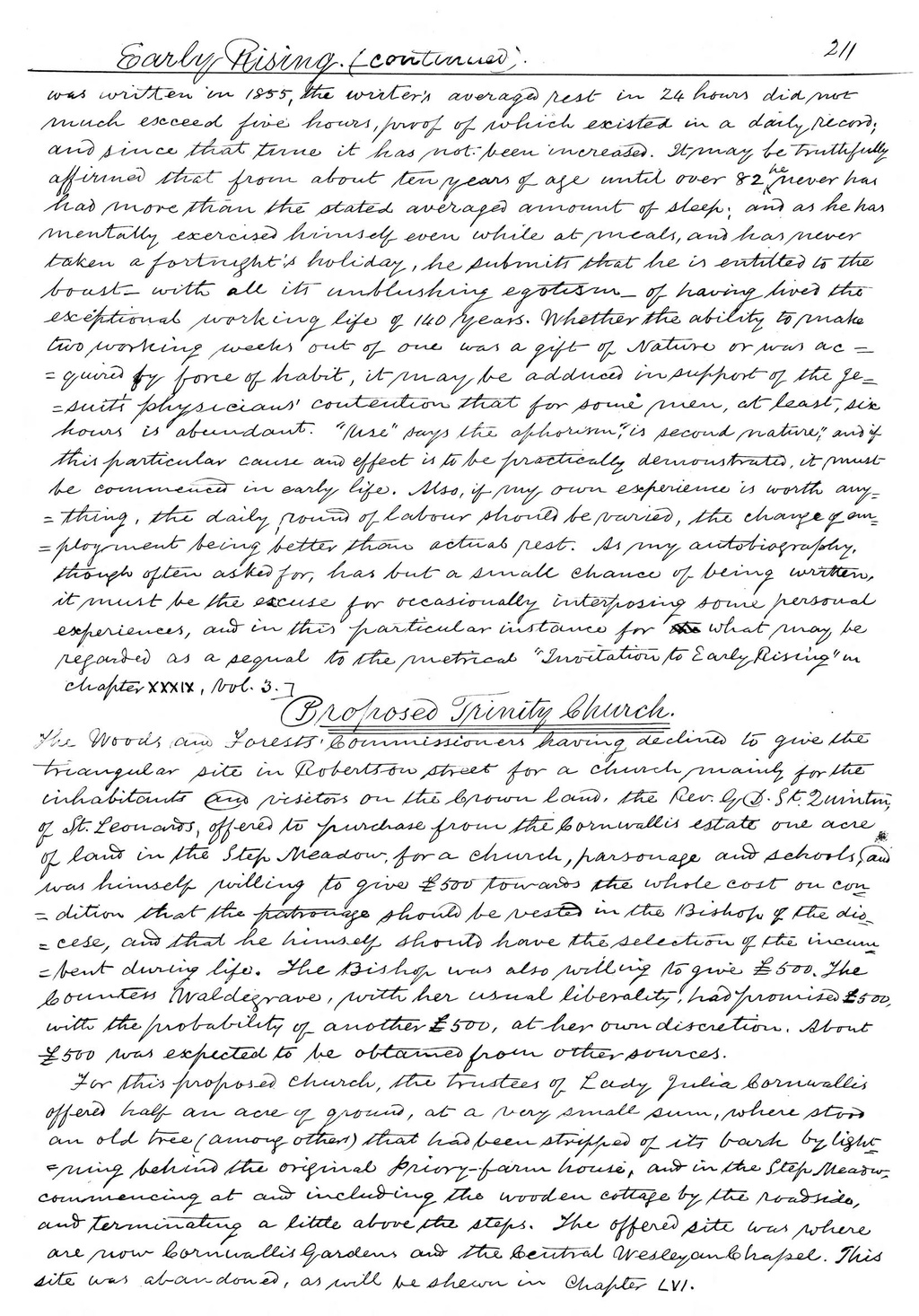