“Great men sleep but little.”
“Artificial luxuries become real wants.”
“The more indulgence the greater indolence.”
“One hour at morning is worth two hours at night.”
“Drowsiness shall clothe a man with rags.”
“Tis the voice of the sluggard,” &c.
“Early to bed and early to rise,
“Make a man healthy and wealthy and wise.”
“Nature wants but six hours rest,
Custom sanctions seven;
Indolence thinks nine are best,
And downright sloth, eleven.”

It is said that when the Jesuits settled the plan at Clèrmont, the physicians were consulted on the portion of time which the students should be allowed to sleep, and that they declared that five hours would suffice, six hours was an abundance, and seven hours as much as a youthful constitution could bear without injury. Our own experience in this matter – and by no means a limited one – may be cited in support of this theory. Five hours is frequently more than we require, although on some occasions six has not been too much. We believe, however, that as a rule, the period most conducive to health is seven hours, and that, with few exceptions it is abundant for all the purposes for which the Creator designed it. But it must be borne in mind that the earlier a person retires to rest, the better. In order, therefore to rise sufficiently refreshed – say at 5 o’clock in the morning, nine or not later than half-past, should be the evening hour for retiring.

We should like to see the young men of Hastings and St. Leonards form themselves into an Early Rising Society. Nothing, we are convinced, would be more conducive to their health, their intellectual improvement and their happiness. Those who have heard of it for the first time may smile at the idea, but let them not imagine it to be a mere utopian scheme. It has been tried in two or three towns with complete success. The plan is to meet at a certain place at about 5 o’clock. If the morning be fine they walk into the country and instruct each other in botany, entymology(sic) or some other branch of study that may be agreed upon. If the morning be wet they repair to a large room and assist each other in historical and other researches, or in the acquirement of languages, &c. The young men of which these societies are composed are chiefly drapers’ and grocers’ assistants, clerks, &c. whose commercial duties do not require their presence till 7 or 8 o’clock; so that whilst thousands of their fellow mortals are passing away an insensible existence in the arms of Somnus, these kindred and energetic spirits sharpen each other’s appetites, strengthen each others moral perceptions, and stimulate each other to continued good works.

[One of the exceptional cases applies to the present writer, but the exception is in the nature not of requiring more sleep, but less. When the foregoing article- 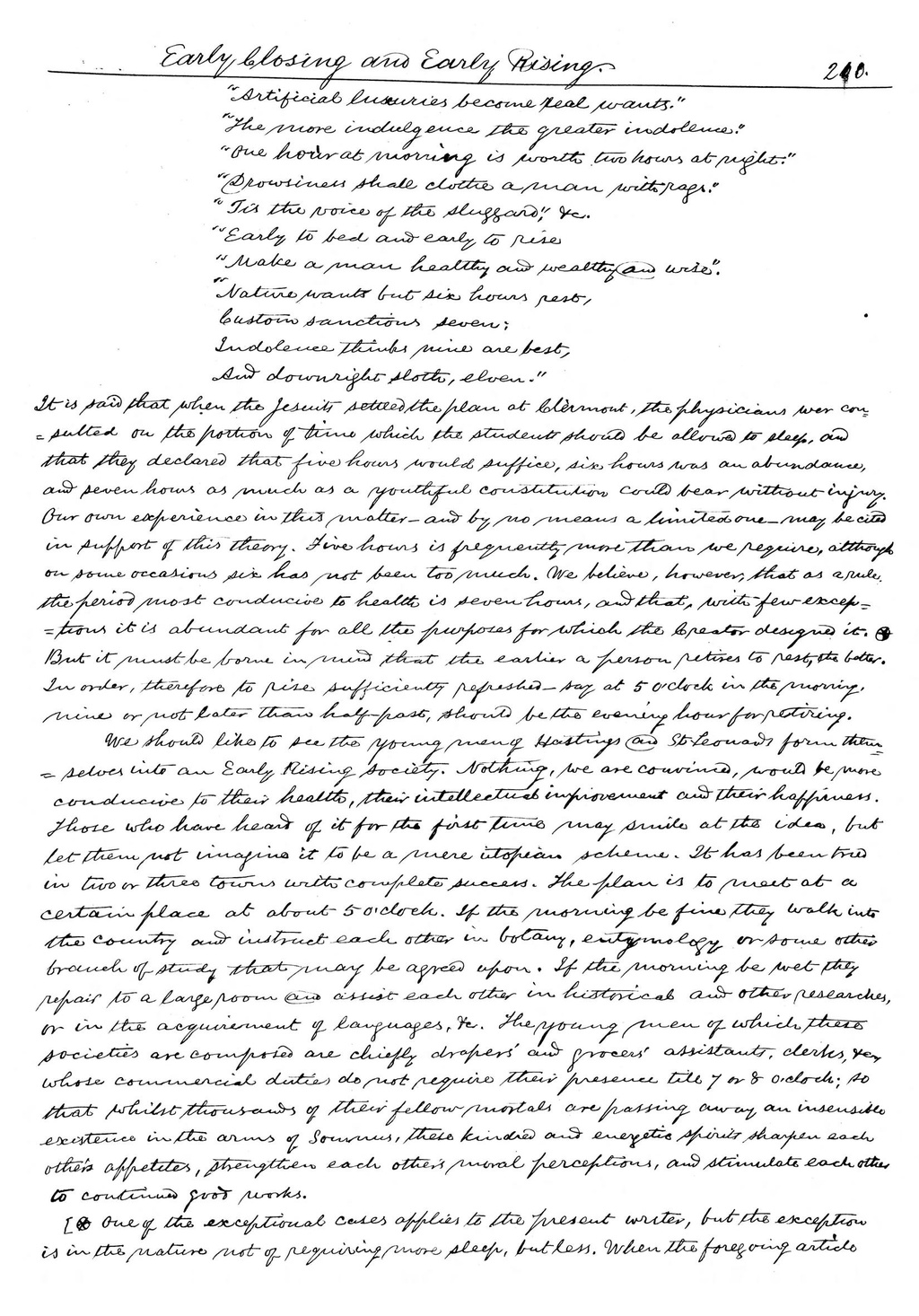