that even if we can steal an hour now and then after the hours of business , the exhaustion of our physical powers frustrates all able? attempts at consecutive thoughts and attention, and we therefore cease to wonder at the great want of success attending the evening classes in connection with the numerous Mechanics’ Institution and Improvement societies with which England abounds.

Let it not be supposed, however, that our sympathy is enlisted in favour of any one particular class – the draper’s assistants, to wit. No such thing. On the contrary, we believe that the dreadful hardships complained of by that class of persons in the present day is more imaginary than real. We think, moreover, that a vast number of these young men themselves have small faith in the reality of those alleged hardships and that their apathy in reference to the Early Closing movement arises not so much from the ignorance of which they have been so ungraciously accused as from a true sense of the superiority of their position when compared with many others who labour for a living. They are not so ignorant as not to know that, however irksome may be their own duties, those of a mechanic are even more arduous. Granted that he ceases toil at six in the evening, he also commences at six in the morning, and has frequently to rise at or before five in order to walk – howsoever inclement the weather – to the scene of his labour. Perhaps he has a wife and family depending on him for support, and during a great part of the winter can obtain no employment – a situation than which none can be more unenviable, and which compels him to toil during summer many hours after the ordinary period. They are not so ignorant as not to know that the agricultural labourer, though he may return to his ill-built and meanly furnished cottage at an early period of the evening, is, nevertheless, obliged to resume his daily labour at three or four o’clock in the morning; and this, too, for a very small pittance, which never allows him to advance in life except in age. Again, we say, that the drapers’ assistants are not so ignorant as not to know that the physical endurance of humanity is often more severely tested in the feminine than in the masculine portion of the community; and when we remind them that laundresses are engaged in a most laborious and unhealthy occupation from six, a.m. till nine, p.m., and that semstresses(sic) and others are employed from “early dawn till dark midnight”, they will probably be more amused than surprised at the proposition contained in a letter inserted in another part of our paper. Whilst then, we would hail with delight any plan that would ameliorate the condition of the toiling millions in general, we would earnestly and seriously press upon the attention of those young men whose evening leisure is practically absorbed by the late hour system, to avail themselves of the far more precious hours of the morning which they waste in unnecessary sleep, bearing in mind the following aphorisms:- 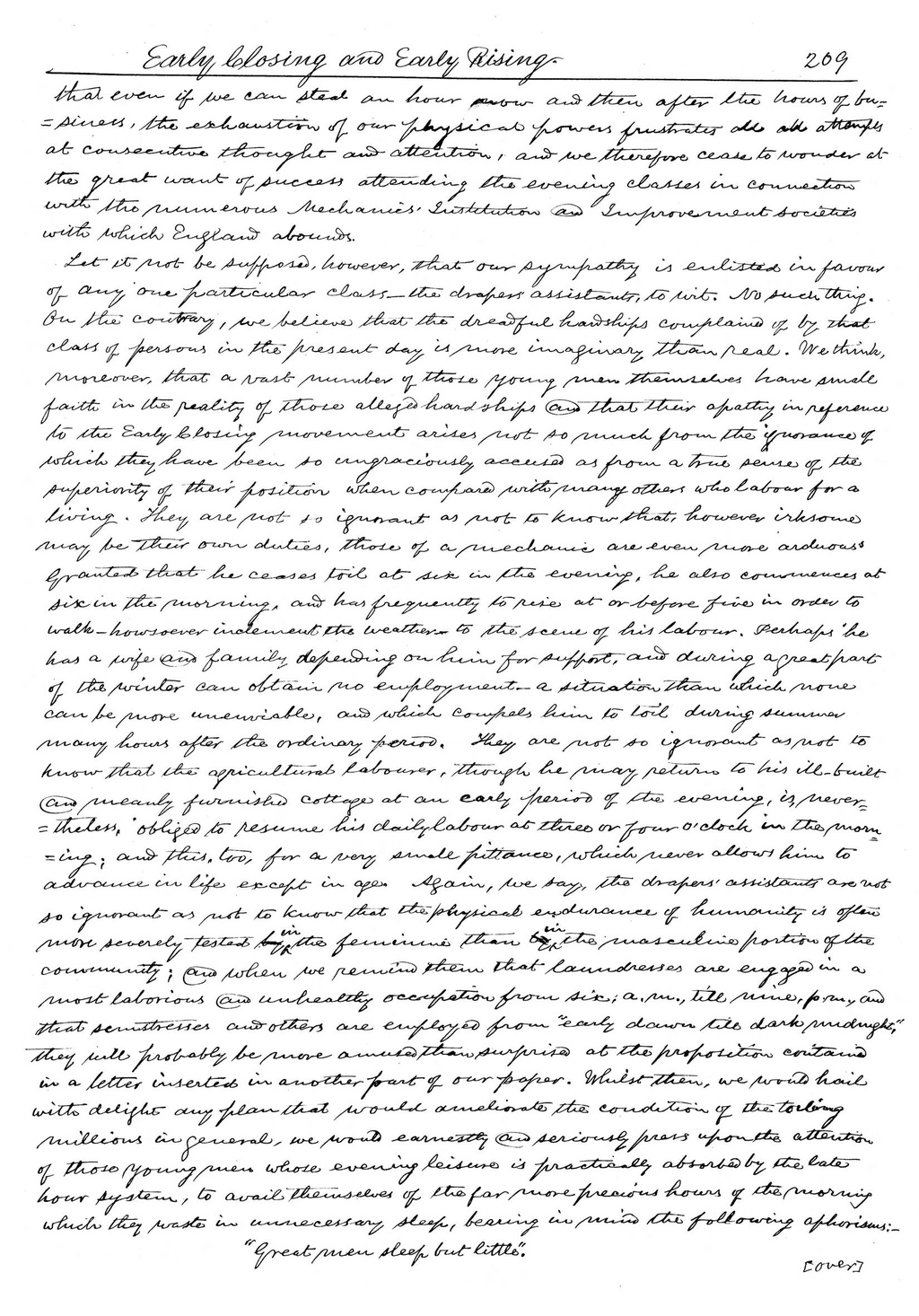