throughout the day. Ask such an individual at what hour he retires to rest, and his answer will probably be “Oh, about eleven or twelve, and sometimes, perhaps, a little later.“ Maybe that the person to whom you put the question is some first-rate drill-sergeant of the knife and fork, a fat landlord, a comfortable annuitant, a high living bishop, or a corpulent alderman, whose system possessing an abundance of carbon, necessitates his becoming, above all men an early riser. Or it may be an aspiring youth, who, after a day’s tort at the counter, the bench, the forge, the desk, or the ship-board, seeks, at a late hour, to improve his mind, but fails to make satisfactory progress. Bent, however, on pursuing his favourite study, he is determined to be an early riser, and for that purpose has recourse to some ingenious device for its accomplishment; but alas! before the day is half spent he complains of that languor and unfitness for duty to which we have alluded. That man was made to labour there can be no reasonable doubt, and that he was also made for rest and recreation is equally certain; but when and how to perform these requirements is the grand thing to know. Too little sleep, as in all other things is equally pernicious as too much. Too little, or if taken at improper hours, causes an unfitness for the duties of the ensuing day, whilst too much predisposes the body to indolence, and leads to a waste of that most precious part of the day – the morning. The same amount of sleep does not suffice for all persons – some requiring more than others, and some requiring more at one period of life than at another; but, with few exceptions, all might do with a less amount of sleep than that which they habituate themselves, were they to seek it at the proper time. But which is the proper time? Most assuredly not the beginning of the morning, however universal the practice may be, but rather? the beginning of night, when the last crimson blush dies away in the west – when the plants fold their leafy coverlets and the light-winged birds pour forth the last sweet carol to the day – when the noisy hum of labour dies into silence and the cool zephyr, fresh from its home of clouds, bears on its wings the message of Heaven and proclaims with a spirited voice the hour of rest.

“Man goeth forth to labour with the sun,
But with the night all creatures draw to sleep.”

‘T were well for the inhabitants of our towns and cities did they emulate those of the rural districts by retiring at eight or nine o’clock in the evening and rising at four or five in the morning; for then, thousands who now from the late closing system and other powerfully operating causes are denied the advantages of the evening lecture or reading-room, would have ample and far more valuable opportunities for mental culture and rational amusement. We know by our own experience- 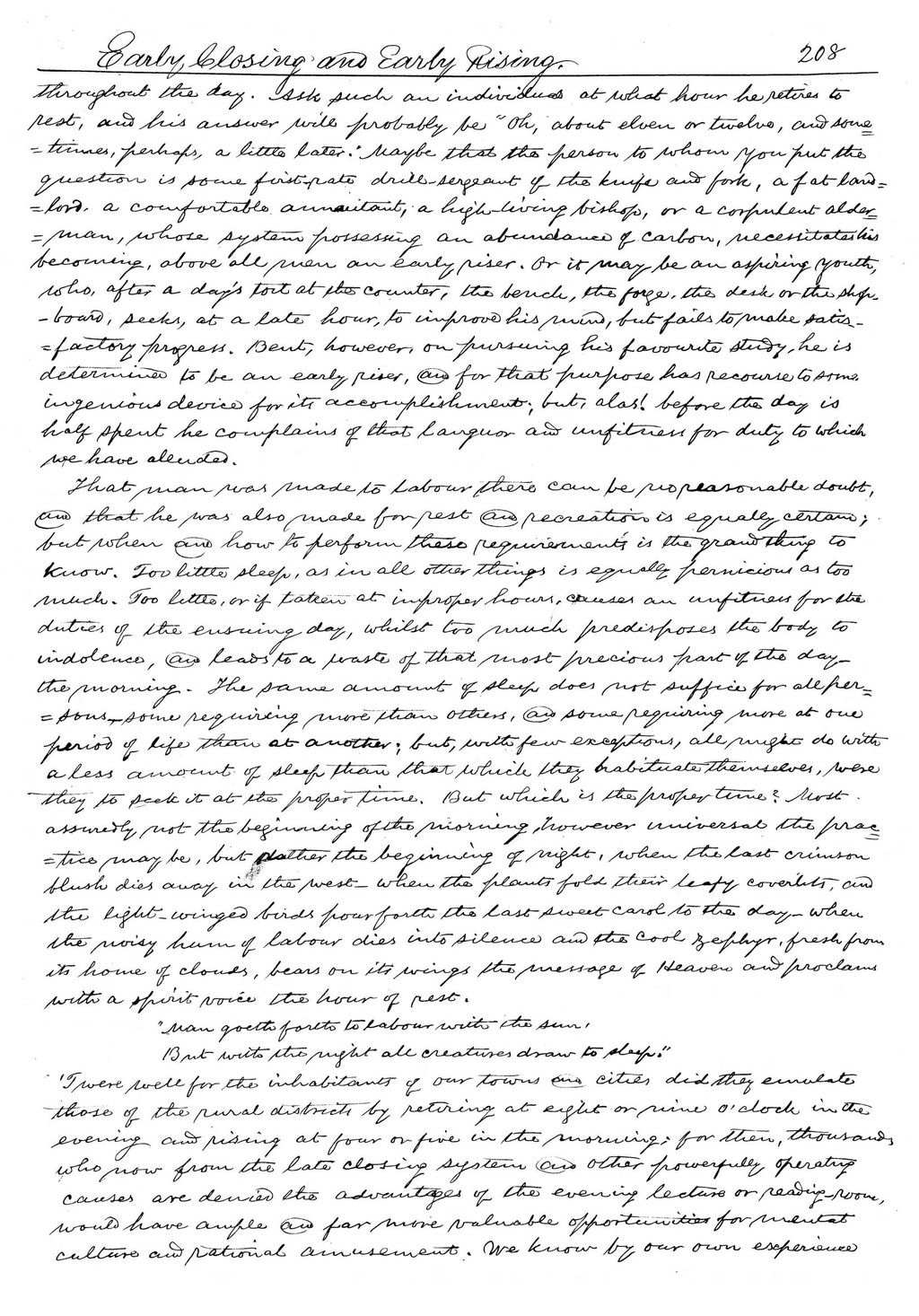