Countess of Waldegrave, and what was paid to him by the vestry was only a donation towards his salary. Mr. Sheen was surprised to hear Mr. Bromley say that he knew of no other way of celebrating the rites of the church, seeing that there was the voluntary principle which could be adopted. He and the other opponents were anxious to remove those abuses which had existed so long in nearly every parish. The churchwardens might only have done what their predecessors had, but they had nevertheless done wrong. The law did not tolerate the levying of church rates, except as they were consented to in vestry. They came there to denounce a system that was anti-Christian. Such a system was not known in the first ages of Christianity, and they believed that the compulsory system made more infidels that anything else. [Hear, hear!]. In proceeding to examine the estimate for the proposed rate, Mr. Winter moved that the organist’s salary be struck out, which was carried by 45 to 24. Mr. Tucker moved that the organ blower’s salary be struck out, which was carried by 44 to 20. Mr. Winter moved that the Sexton’s salary be struck out, as there were no graves for him to dig now. This was also carried. Mr. Lye moved that the beadle’s and pew-opener’s salaries be struck out - also carried. Mr. Sheen moved the same operation for the £5 to the rate-collector, which being also carried, it was then moved that the £16 10s. for gas lighting be struck out. A further discussion ensued, after which the other items were allowed to stand – namely £25 for repairs and £20 Clerk’s salary. Then followed another long discussion for and against Mr. Bromley’s motion for a rate, during which Mr. Tucker proposed as an amendment that no church-rate should be made on that occasion but a voluntary subscription be entered into. He remarked in reply to a statement by Mr. Langham, that tithes and church-rates were not of a like character; for whereas tithes were fixed charges, church-rates were not, and need not be made unless vestries were so disposed. He referred to the decisions of Baron Parker and other judges in the late Braintree case. He expected churchmen to exhibit that love for their own church which would induce them to maintain it. Mr. Lye, in seconding, said he was willing to give the amount vontarily(sic). Mr. Bromley, in reply, said no one would rejoice more than himself at the adoption of any motion that would produce peace and harmony among the parishioners; still he felt there was a responsibility resting on him, and that he would not be doing his duty if he did not ask for a rate. But whatever might be the result, he would be perfectly satisfied, and hoped the question would be settled for ever. On being put, the amendment was carried by a large majority, and the rate was thus thrown out. The result was received with loud cheers. Mr. Amoore demanded a poll. This took place on the following Monday, when there appeared 131 ratepayers against the rate and only 70 for it, thus leaving a majority for the objectors of 61.

Subscriptions. On the 24th of October another vestry meeting was held, and- 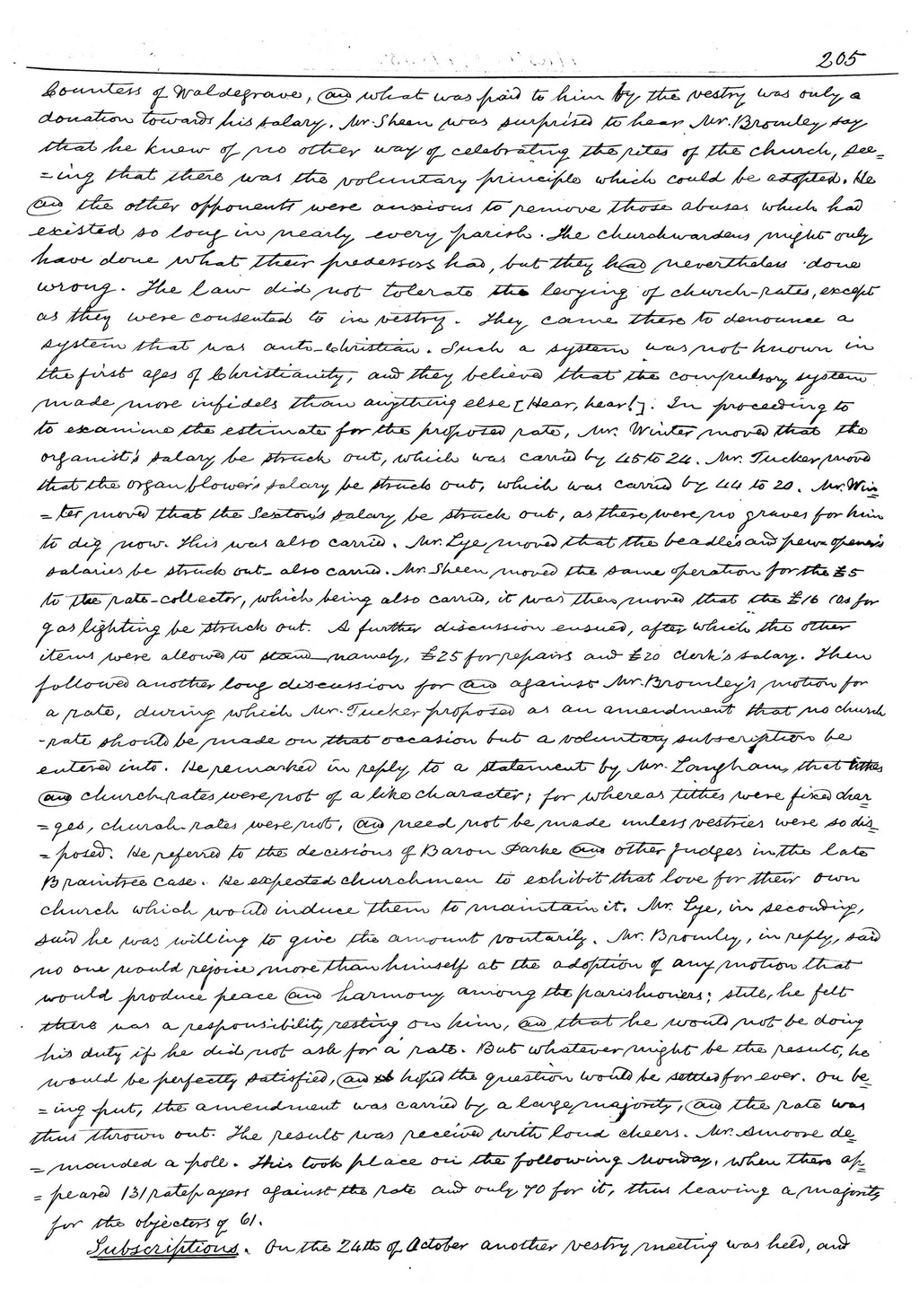