Mr. Sheen, of 81 High street, having been given a certain time for the payment of a church-rate, and not having complied with the order such order was not enforced, although several weeks had elapsed after the stipulated date. A counsel’s opinion by T. S. Pinks, Esq. was to the effect that the conduct of the magistrate was illegal, and that an appeal to the Quarter Sessions would have been successful.

Church Rate Defeated. On the 12th of October, a St. Clement’s adjourned vestry was held for examining the churchwardens accounts and to make a rate. It was proposed and seconded that the Mayor take the chair. In going through the accounts, Mr. H. Winter moved that the charge for the beadle and the pew-opener be struck out, as they were not sanctioned by vestry and were not necessary officers, and it being the duty of churchwardens to put people in their pews. Mr. Sheen having seconded the motion, the chairman said if he were an opponent he would not interfere with the past, but confine his opposition to the future. Mr. Sheen said if abuses had existed for centuries, let them be put an end to at once. Mr. Winter considered the Dissenters in Hastings ill-used, and they were present with a determination to take every legal step to put a stop to the present system. [The vestry at this stage became so crowded that an adjournment to the Town Hall, close by, became necessary.] Mr. Winter said he had made out a list of objections before coming to the meeting, which he then read. These he would include in his original motion. Here, some assertions and denials as to what had been said out of doors, respecting a new window caused great confusion, in the midst of which the Mayor said that unless Mr. Bromley (a churchwarden) withdrew what he said, he (the Mayor) must vacate the chair, although he would admit that it was unfortunate that gentlemen should store up words which had been dropped in casual conversation, and bring them forward at a public meeting. Mr. Winter consented to withdraw from his list of objections 10s for the Visitation dinner and the cost of insurance, because they were permanent expenses, but the cost of gas required a fresh order every year. Also, if the churchwardens would allow him and others to enter their protests in the minute book against the items he would withdraw his motion. This was agreed to and a protest was then signed by Messrs. H. Winter, J. Tucker, R. Lye, J. Notcutts, T. Sheen, and others, against the beadle, £4; pew opener, £3; holly at Christmas, 5s.; cost of new window and doorway, £135 (less £75 towards the same by the Rector); Visitation fees, £3 18s.; gas-lighting, £4 17s. 7d. ; repairs to organ £13. On the motion of Mr. Langham, the Churchwardens’ accounts were then passed. Mr. Bromley then asked for a rate at 3d. in the pound, as he knew of no other means by which to maintain the fabric, pay the salaries, gas, &c. Mr. Winter did not think the organist was a parish officer. He received £15 from the- 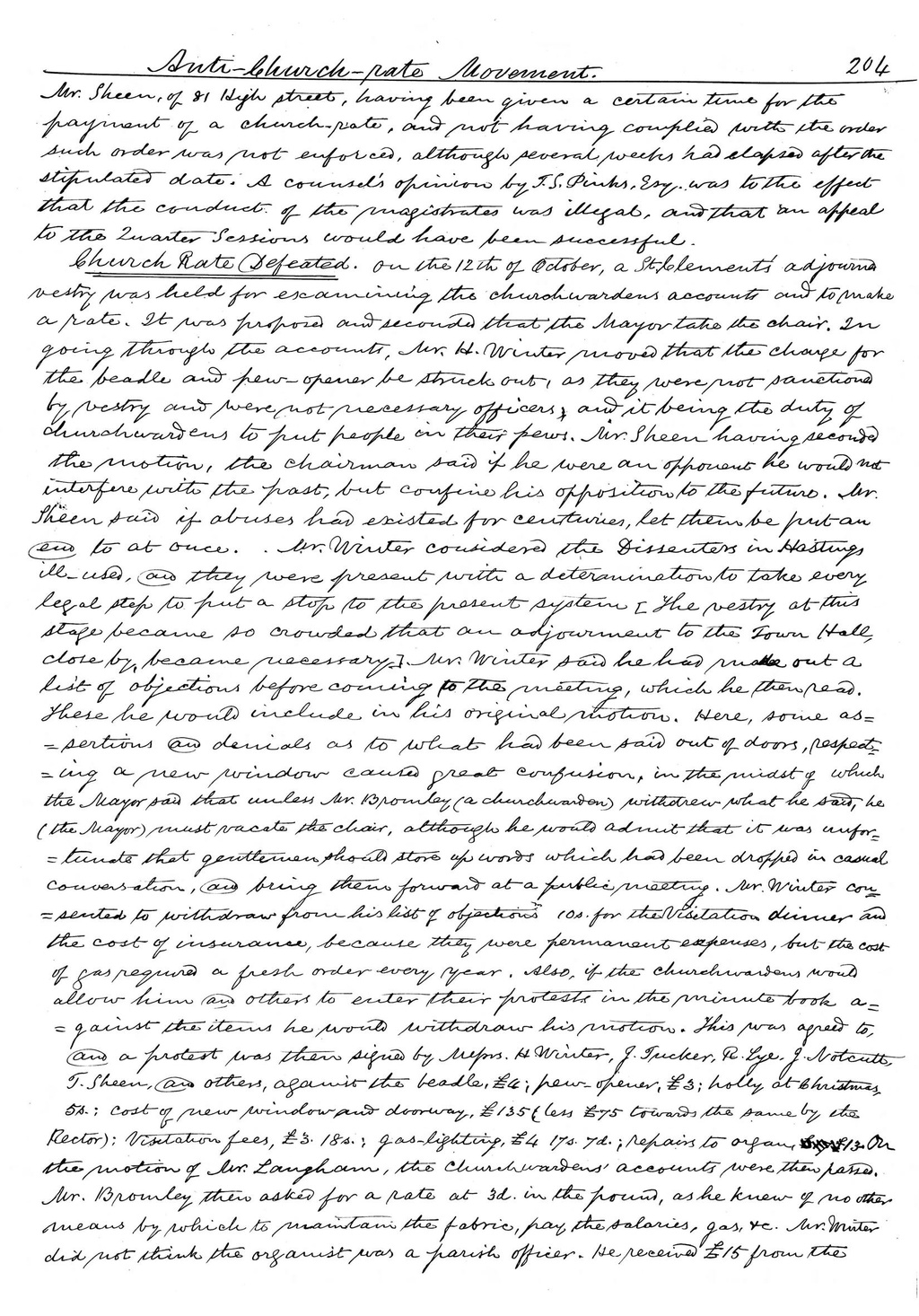