thirty witnesses had been examined, all of whom had deposed to acts of drunkenness. He appeared, however, to be a kind-hearted man, and had never been seen intoxicated in the church. The Court thought it would sufficiently discharge its duty by suspending him from the discharge of divine service for two years, at the end of which he must produce the usual certificate from three beneficed clergymen that he had conducted himself with greater propriety. He must also be condemned in the costs, and be deprived of the receipts of his benefice during the two years suspension. How this offending clergyman conducted himself after the loss of his annual income of £460 for two years I cannot say, but it appears that he was never reinstated; for at the end of his two years suspension (1857) the Rev. F. Young was inducted to the living of Pett on the recommendation of the same patron, Mr. R. Thornton; nor can I learn that Mr. West ever obtained another benefice.

Presumably the said Robert West was a relative (perhaps a son) of the Rev. J. J. West, many years rector of Winchelsea, who was at times guilty of similar behaviour, and who, as an avowed predestinarian declared from the pulpit that Hell was paved with babes. This clergyman’s eccentricities – to use a mild term – got him into disfavour with many of his parishioners, and so disgusted the Stileman family at the Friars, as to induce them to worship at the church of Icklesham.

Strange to say, that while Mr. West was in disfavour of most of the Winchelsea people, he was in high favour with some of the Hastings townspeople, whose infatuation was such that they almost regularly walked eleven miles every Sunday to Winchelsea church to hear their favourite preacher. I first knew the Rev. J. J. West when he was curate of St. Mary’s, under the Rev. W. Wallinger. Although having an impediment in his speech, he was otherwise a fluent preacher. He was presented to the living of Winchelsea, in 1831 by Sir W. Ashburnham, Bart. He died in 1872, and was buried at Guestling, where the following memorials may be found:-

Another clergyman who indulged too freely in intoxicants was one who for some time did duty at Winchelsea church in Mr. West’s time, and to whom it happened to be the officiating minister to make man and wife of the present writer and the woman of his choice. Sad to say, the want of steadiness in the virtue of sobriety sometimes brought the said clergyman (whose name I withhold) and his family to the brink of starvation, and for whom sympathy was felt by the dwellers in Russell street, Hastings. 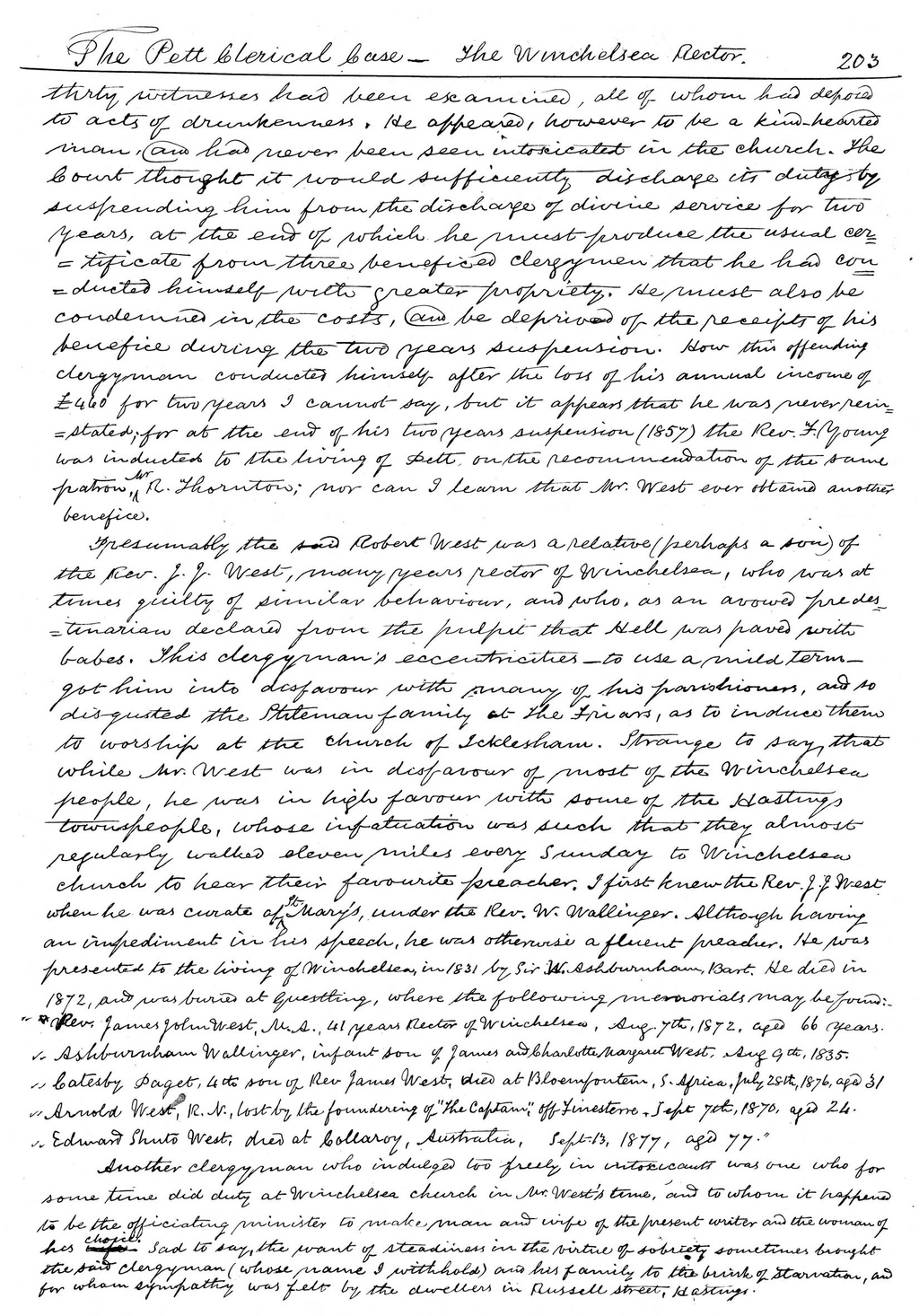