with a seies(sic) of acts of misconduct, commencing in May, 1854. After that date he frequently exhibited himself in a state of intoxication, not only in his own parish, but also at Hastings and Rye. On the 24th of June he went in his own private yacht to Folkestone and put up at the Hotel de Paris, where he and his crew got drunk. In the following September he sailed over in his yacht to Boulogne and made a stay of three days at the Hotel Bedford, during the greater part of which time he was in a state of inebriety. On the 2nd of August he gave a feast at the Rectory to the school children, and was then intoxicated. At the end of the same month he gave a party to his yachtsmen and some men of the Prentive(sic) service at the “William the Conqueror” at Rye, when he again transgressed the bounds of sobriety. On Xmas Eve he was again drunk at the Rectory, and on that occasion he put his arms around the waist of his maid-servant and endeavoured to induce her to dance with him. On the 1st of January, 1855, he invited several of his poorer parishioners to dine with him, when he was again drunk. On the 6th while returning in his carriage from a neighbouring clergyman’s, he had an altercation with a waggoner, whom he assaulted; and on the 3rd of the following month, he was fined by the Hastings magistrates for violence. On another occasion he attempted to give a tradesman an order for “infernal” coals, but was unable to do in consequence of his drunken condition; and on several occasions he was refused by the officials at the railway station to travel on the line. On the 10th of March he landed at Folkestone from a steam packet dressed as a sailor, and attended by a servant in livery. He went to the station, and being refused tickets, he said “I am Bob West, a captain in the Navy. I’ll let you know who I am; damn you, I’ll have the coat off your back.” Shortly after, he went to the harbour-master, and demanded of him “Do you consider me beastly drunk?” The reply was in the affirmative, and he was advised to go to his hotel and keep quiet. On the 19th of the same month, he presented himself in a drunken condition before the school children. In the same month he visited a female parishioner who lay dying, and even then he was intoxicated, and when he came down stairs he expressed himself in terms of levity and impropriety before the family. He offered to supply her with wine, and gave some money to one of her daughters for that purpose, but as she was going out he threw his arms around her and attempted to kiss her. Many other instances of impropriety were detailed, in answer to which the reverend gentleman merely put questions to the witnesses. The learned judge did not wish to press greatly on the consel(sic) for Mr. West, but- 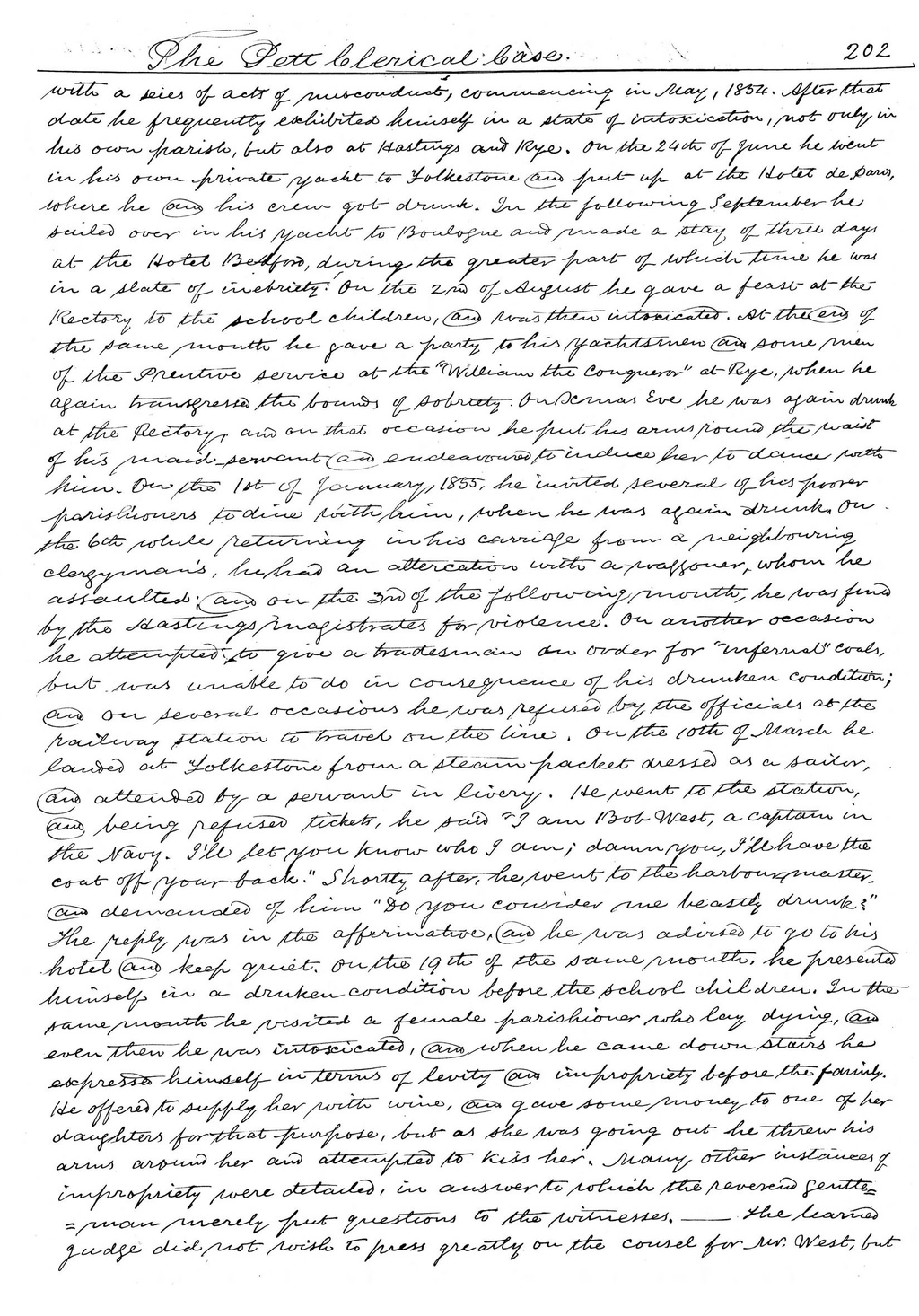