annum, the Institution paying for the lease and sugested(sic) alterations. The remaining articles of such (Museum) room to be disposed of. At a meeting on the 28th of September, the following meteorological instruments were presented to the Institution by some of its members:- a barometer, a dry and wet bulb thermometer, a maximum and a minimum thermometer, and a rain guage(sic). For a service in connection with these instruments, Mr. Glaisher, Secretary of the British Meteorological Society, was elected an honorary member. The subscribing members elected during the year were Mr. George Lundridge, Dr. Steavenson, Rev. J. H. Fisk, Rev. Edward Woodyatt, Rt. Hon. Earl Waldegrave, Dr. A. H. Marks, Rev. H. W. Simpson, (Bexhill) Rev G. D. St. Quintin, Thos. Frewer, Esq., Rev. Mark H. Vernon (Westfield) Miss Towgood, Rev. H. Raven, Mr. Jas. Rock, Mr. Wm. Smith, Mr. Seth Thomas, Miss Busk, Miss Field, Mr. J. G. O’Neil, Rev. J. Alton Hatchard, W. T. Agar, Esq (Ore), Dr. de Miere, Rev. T. Nightingale, Dr. Underwood, Rev. J. C. Young (Fairlight Vicarage), R. Hunter, Esq. (Fairlight Hall) Vernon Harcourt, Esq., C. J. Kilpin, Esq., and Miss S. A. Piper. At the last meeting of the year (Dec. 28th) it was resolved that a letter of condolence be sent to the family of the late William Ransom, sen. and that the committee desire to record their sense of the valuable services which he rendered to the Institution during the many years he was their librarian. It was further resolved that Mr. Arthur Ransom be recommended at the annual meeting in January in the room of his father at a salary of £15 per annum. Taken altogether the year 1855 appeared to be one of revival. The meetings of the committee were more numerous than in previous years, and much appears to have been done by the honorary secretary, (the Rev. J. Parkin) in getting new members; hence, probably the accession of four clergymen of Hastings, four of St. Leonards, one of Westfield, one of Fairlight and one of Bexhill.

It is gratifying to know that all the clergymen whose names appear above as members of the Literary Institution were gentlemen of worthy deportment and highly esteemed for their general virtues. Not so, however, be it said with regret, was it with him who succeeded another worthy clergyman in the neighbouring village of Pett, and caused the inhabitants to bear record of a clerical scandal. On the 21st of December, in the year now under review, letters of request in the Arches Court were brought from the Diocese of Chichester against the Rev Robert West, rector of Pett, for habitual drunkenness, and for brawling, smiting, using profane language and for other unclerical conduct. In the year 1853, the defendant had been inducted to that rectory, on the representation of Mr. Richard Thornton of London, which rectory had become vacant through the removal of the Rev. Henry Wynch, and he was charged- 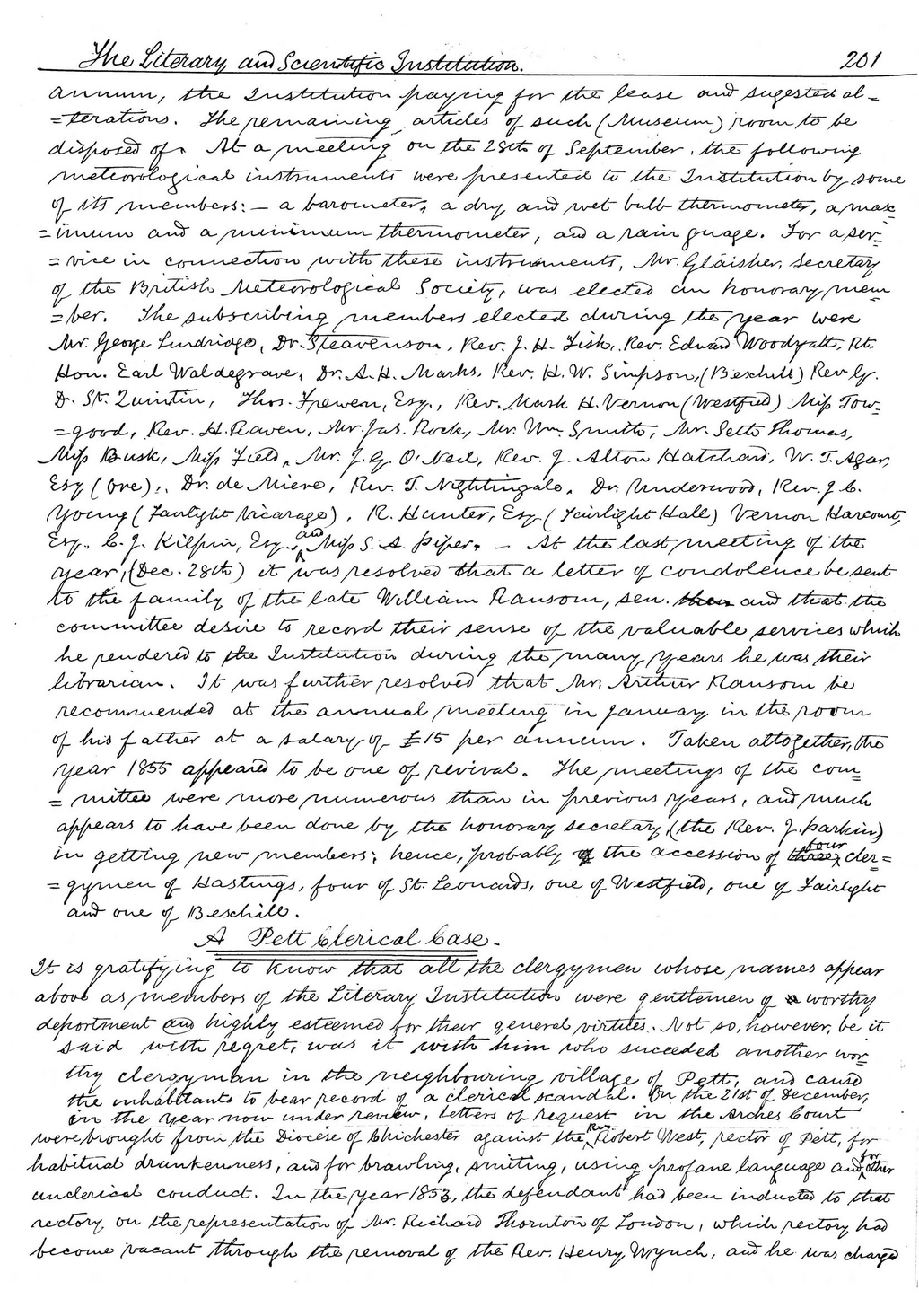