A Lecture on Music, by Mr. T Elliott, was delivered on the 17th of December to the members of the Institution, Mr. J. Banks presiding.

A Lecture on “The Alhambra, its History, its Literature and its Legends, delivered for the Institution on Dec. 3rd, evoked deeply attentive interest. The lecturer was W. Caveler, Esq.

At the quarterly meeting on the 7th of November, the Committees report showed a favourable cash balance of £27 and was otherwise encouraging.

Mr. Stidolph, of Tunbridge Wells, gave a lecture on “The connection of the Vegetable and Animal Kingdom.” The date was Dec. 3rd.

At a general meeting of the society on 26th of January, the Treasurer’s accounts showed a balance in hand of £9 14s, out of which it was resolved to pay £9 9s. 1d. for repairs. The following recommendations of a committee were adopted:- That for the future, the Institution shall be managed by a committee of twelve members, including the President, Secretary, and Treasurer; that meetings be held at least once in every quarter; that the rules receive such alterations (for re-printing) as the Committee consider necessary, and a copy of the same presented at the next meeting.” A report on the condition of the library showed that 43 vols. were missing; that a considerable number wanted rebinding or otherwise repairing, and that 122 books had not been bound at all. Resolved that the Rev. Jos. Wallis, F. J. Hawkings, J. H. Cole, and E. Macmundo, Esq. be admitted members. The President re-elected was F. North, Esq. The vice-presidents were B. Smith, J. G. Shorter, Robt Ranking?, F. Smith, P. F. Robertson Esquires, and Major Close. The Committee were Rev. T. Vores, Dr. Greenhill, W. Scrivens, M. Collin, Esq. – Crosbie, Esq. W. J. Gant, Esq., G. Hayles, Esq., F. Bennetts, J. Rock, Esq. Rev. J. Wallis, Rev. J. Parkin, and G. Scrivens, Esq. At a meeting on the 30th of March, the revised rules were ordered to be printed. On the 9th of April, it was resolved that a list of members and subscribers be suspended in the reading room and that the names of the officers be circulated among the members. Also resolved that a Library Committee of five be appointed every year, to meet monthly, to take care that the books be not lost or damaged, to superintend the purchase of books, to provide books from a general circulating Library in London, to see that the titles of all new books are entered in the catalogue, and to report to the Managing Committee each quarter the fines incurred for members and subscribers keeping books beyond the time allowed. Resolved that a room be leased to Mr. Gant at £25 per- 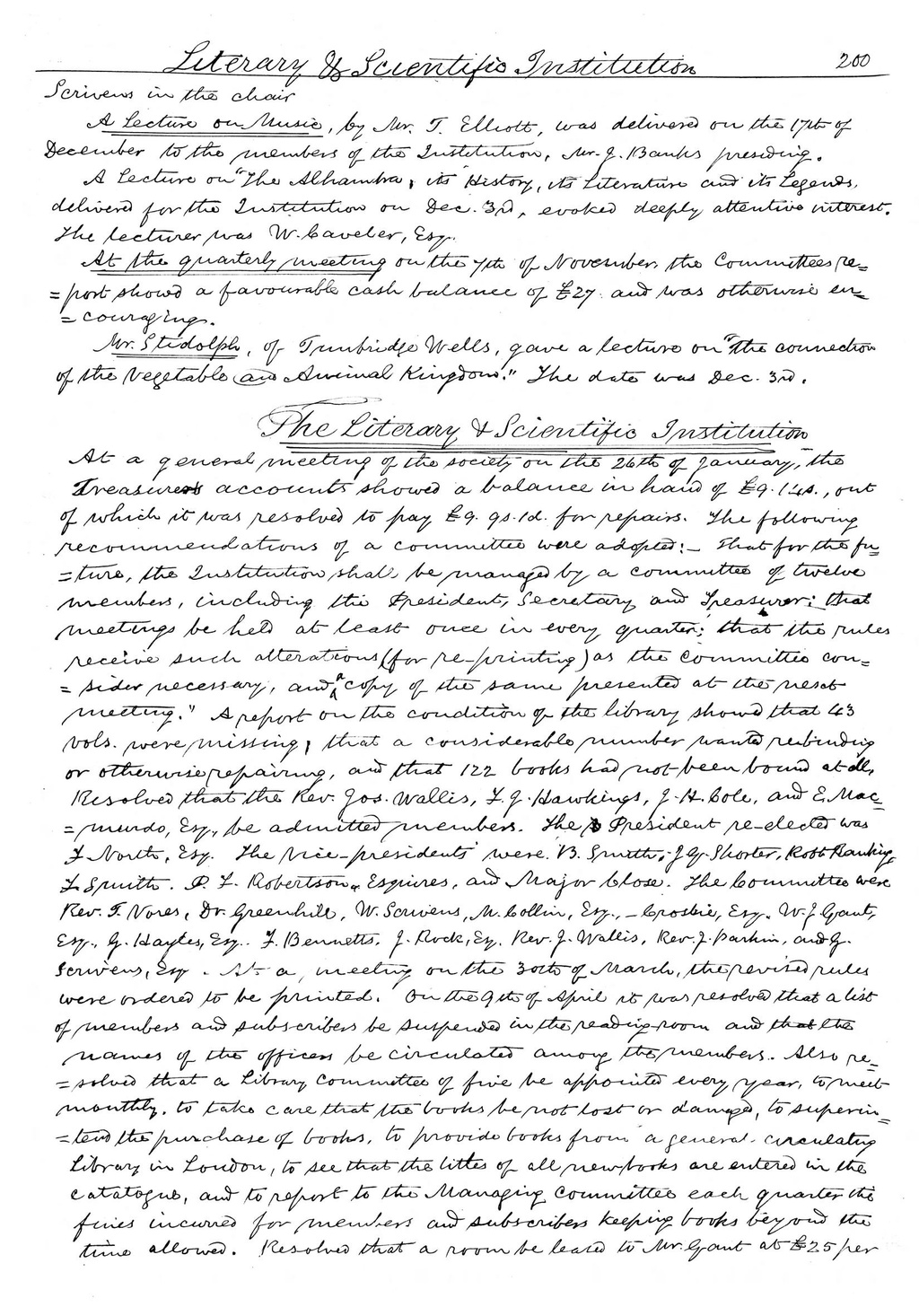