idea of handing it over to the Mechanics’ Institution, suggesting also that an offer of £1400 be made for the building, and which the Mechanics’ Building Committee acceded to. But some time after they received a communication from the secretary that the kind offer of the Mechanics’ Institution to relieve the members of the Literary Institution of their nice building, with the furniture, &c. for £1400, was rejected by a large majority. The reading of this caused a series of comments in which the reply was unfavourably criticised, and the committee was instructed to be still looking about for more convenient premises.

“The Homes of the Middle Ages” was the topic of an interesting lecture in the rooms of the Institution, on the 12th of February, by W. Caverly, Esq., of Margate.

”Crime and its Remedies” formed the text of a discourse by Mr. R. Dawson, on the 19th of the same month.

“The Life and Writings of Oliver Goldsmith” was a theme on which Mr. T. Hudson, of London expatiated for the Institution on March 5th.

“The Pendulum” as explained and dwelt upon, proved to be a very interesting lecture delivered in the Swan Room by Mr. E. Dobell, of Robertson street on March 12th for the information of the members.

Joan of Arc was the subject of the next lecture (March 19) to hear which, there was a an overfow(sic) audience at the Swan Assembly room.

A Quarterly Meeting of the Institution was held on the 2nd of May, when from the Committee’s report the prospects appeared not quite so cheery as did the “success beyond precedent” rejoiced in at the preceding quarter. Thirty-seven members had declined, and 17 fresh ones had been admitted, leaving a total of 374. Taking all things into consideration, said the report, the Institution was in a good position.

“Heat and Cold” was the title of a lecture delivered to the members and others on the 29th of October, by E. Wheeler, Esq., C.E., accompanied with experiments.

Nitrogen Gas was lectured upon by Mr. John Banks, in his usual familiar style on the 5th of November, whilst “Guy Fawkes and his companions” were exploding other gasses in the streets.

“The Literary History of the Bible” was ably treated in lecture form, on the 12th of November by Mr. J. C. Womersley, who with Mr. W. Ransom, Mr. E. Dobell, Mr. H. Winter, Mr. Joshua Huggett, Mr. G. Meadows, Mr. Elliott, and a few other lecturers or members of the now defunct Institution are still our townsmen although 44 years have passed since the date under present review.

“Jerusalem” as a lecture was descanted upon on the 11th of December, by the Rev. W. Gibson, Wesleyan Minister. (Jas. Rock in the chair)

“The Ottoman Empire” was the title of a lecture delivered on the 19th of December, at the Swan Hotel in connection with the Institution, Mr. G. Scrivens in the chair. 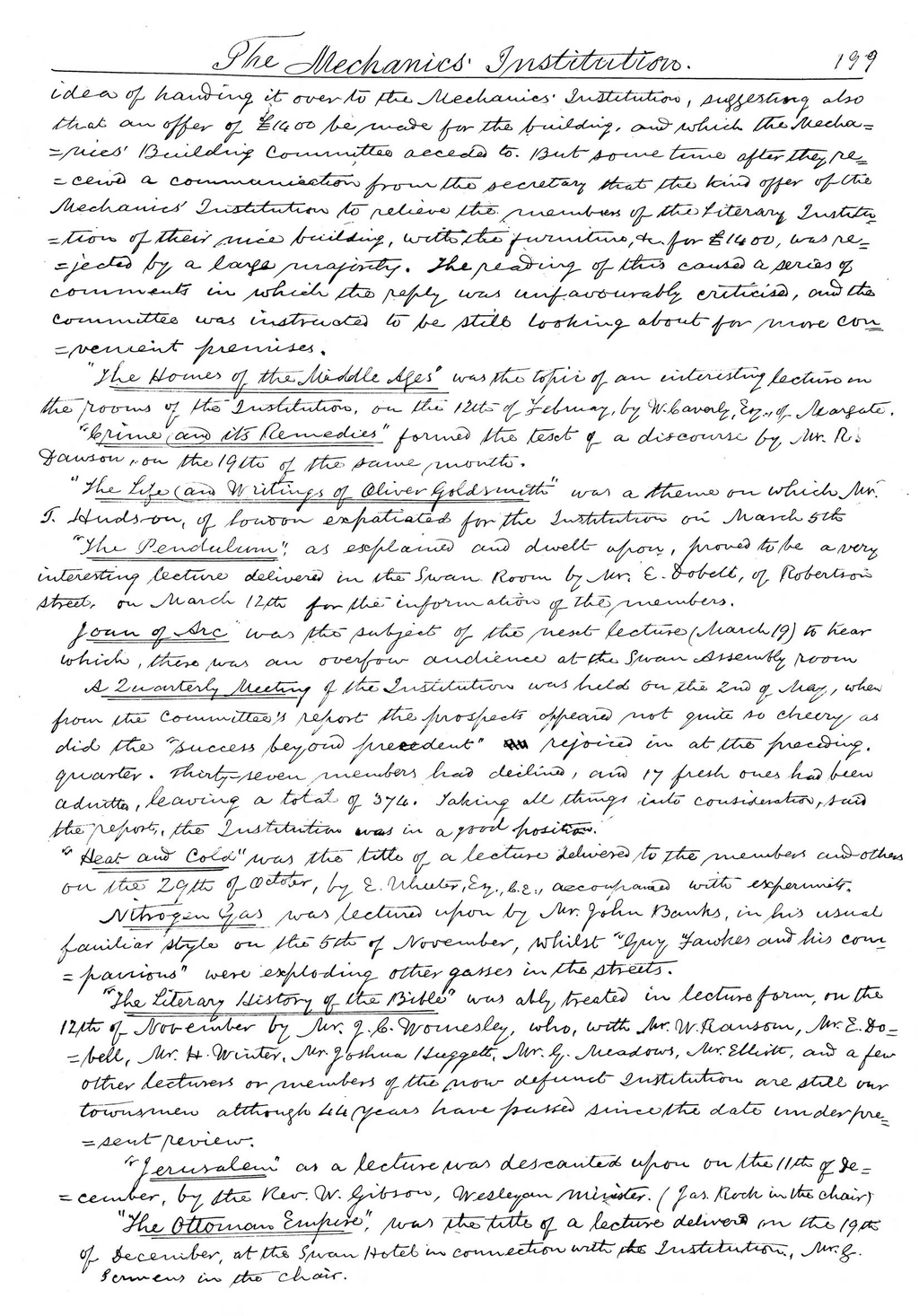