Capt. Robert McClure. The celebrated Artic(sic) explorer, who regarded himself as a Hastings man in consequence of his many years residing in the town, and to whom a public dinner was given to him to commemorate his return, (as described in chapter LII) was presented to her Majesty on Nov. 21st by Sir George Grey, when he received the honour of knighthood from the Queen.

Our Gallant Townsman Major-Gen. Menzies, K.H.K.C. her Majesty’s late Aide-de-Camp, was promoted in the month of June to the rank of Lieut. General on the active list.

The Rev. R. O. Thorpe, brother of G. A. Thorpe, of Hastings, was preferred to the vicarage of St. Clement’s Cambridge.

The Rev. W. B. Otter, successor to Archdeacon Hare, performed the Archdeaconal service at St. Clement’s on the 31st of July.

The Rev. J. Parkin, M.A., of Hastings, was appointed by the Bishop to be a surrogate for granting marriage licenses, proving wills, and granting letters of administration in the place of the late Rev J. G. Foyster.

Gabriel V. Daniel, a well-known native, was appointed in May, as manager to a new line of steam packets plying between Harwich and Antwerp, under special arrangements of the Belgian Government.

W. D. Lucas Shadwell, Esq., on the 22nd of March, observed his annual custom of giving 320 gallons of bread to the poor of All Saints. He also repeated his Christmas gift of beef, &c. to his farm labourers and their families.

Mr. William Giles was presented with a testimonial by the subscribers to the Pelham Library in consideration of his uniform courtesy and business habits while carrying on the establishment for the executors of the late Mr. William Reid.

Mr. Edward Wingfield was elected on the 26th of May as assistant overseer for All Saints, by 155 votes, against 33 for Mr. Elias Cousens.

Messrs Rock and Son built two magnificent carriages for some of their customers in Australia. They were of the same size and style as their Diorophia Carriage for which they obtained a prize medal at the Great Exhibition of 1851.

The King of the Belgians and suite stopped at Hastings on July 23rd to change carriages , while on their way from Portsmouth to Dover.

Mr. Cooke and his equestrian company made a grand entry into the town on Monday, Aug. 6th, and performed for two days in the Priory Meadow.

Signor Gavazzi, on the 8th of August gave an oration on “The Inqui- 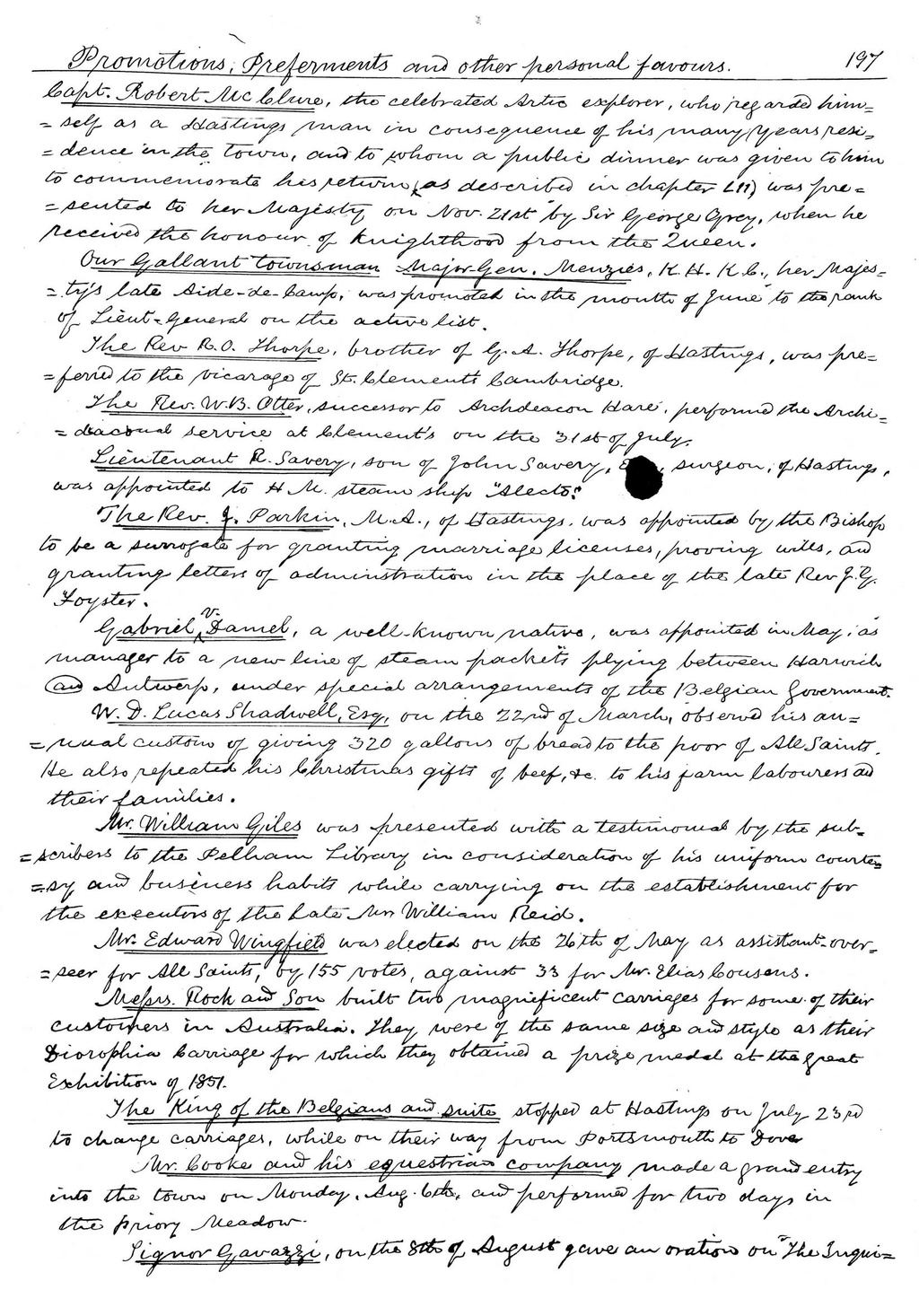