A Four-masted Ship passed up Channel on Monday, March 12th, and appeared to be sailing with more than ordinary speed under a crowd of canvas filled by a good breeze.

A Rowing Match from the Fishmarket to Warrior Square and back took place on the 14th of May, between Mr. C. Bowman in the Alfred, and Mr. L. Yates, in the Sylph, the former being considerably the winner.

A New Galley, named The Unity was built in the same month of May by Mr. Wyld, of Lambeth, for some of the Hastings oarsmen, it was predicted that this new galley would be able to beat all the others, but the prediction was not verified, as will be seen in the next paragraph. The quidnuncs said it would have been better to have let the celebrated George Tutt, of Hastings build the boat, who was still in the van of lugger and skiff builders.

The Annual Regatta took place on Friday, Sept. 14th and was watched with much apparent interest by a large influx of strangers, albeit the weather was somewhat breezy and showery. The Committee-boat was moored opposite the west end of the Marine parade, on which latter was stationed Brett’s Hastings & St. Leonards Brass Band. There were 11 matches and an amusing tub race. In the sailing match eleven boats started, and the winners were respectively, of Eastbourne, St. Leonards and Hastings. The prizes £15, £8, and £5 for first-class 4-oars, were severally taken by Dover, Brighton and Hastings, the London built “Unity” being the last boat but one. In the second-class 4-oars the winners were Dover, Brighton and Hastings. The prizes for Amateur 4-oars, were won by Brighton, Hastings and Dover. The first-class skiff winners were Ramsgate, Ramsgate & Brighton. The 1st-class sculls were Hastings, St. Leonards & Hastings, and the Amateur ditto were Brighton, Hastings and Hastings. Thus our local men did not show to much advantage.

England a Naval Power. The New York Times of this date declared that “Those who talk about England’s decline becaus(sic) she has lost 30,000 men before Sebastopol talk twaddle. The loss of ten such armies would only serve to unveil her resources and bring out the indomitable energy of her people. She is a maritime Power. Her commerc(sic)establishes her rank among the nations, and her navy is strong enough to foster, guard and watch over that commerce in every quarter of the Globe”. That sentiment is more than ever endorsed in 1898 at the time I am writing when the expressed friendship of England and America is much warmer than it was 43 years ago.

Roger Montague North, late Captain in 2nd Light Cavalry of the H.E.I.C.S, after being presented to Her Majesty by his brother, F. North, Member for Hastings, left Hastings to take service as Captain of a Turkish regiment of Cavalry under General Vivian, being required to join his new regiment by the 20th of April. 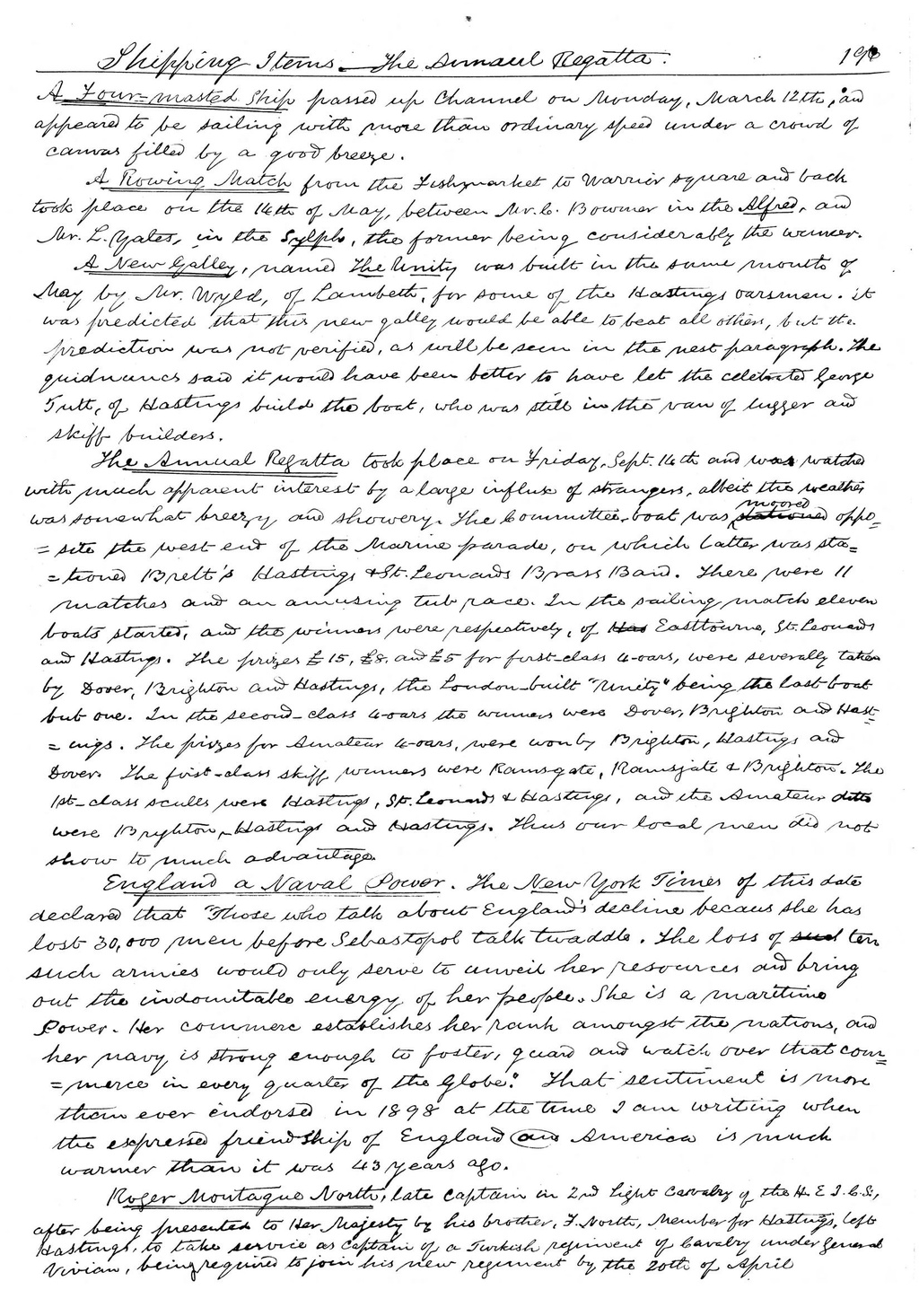