A Comparatively Dry Year. Notwithstanding the copious rain of the 25th and 26th of October, and the showery conditions of over twenty days of the same month, the rainfall of the year was very much under the average. At Hastings the total depth was 21.08 and at Pevensey only 18.78 inches, in both cases the smallest quantity for at least sixteen years, and only half the rainfall of 1848 and 1852. During the first five months the rainfall was only 6.05 inches.

A Clipper Ship from Melbourne.

The splendid ship “Kent” arrived off Hastings on the 27th of February after a voyage of 83 days from Melbourne. She landed seven passenger, and a heavy mail of 48 boxes. This vessel – one of the finest out of London – left Melbourne in company of three other ships, and it was stated by one of the passengers that the scene at starting was more like an English regatta than that of four ships starting on a long and perilous voyage. The Kent was the first to reach England, though one of her competitors was the celebrated Marco Polo. The Kent brought a very valuable cargo of gold, and upwards of 200 passengers, among whom were many who had been successful at the “diggins”. One party of eight had amassed gold to the extent of £22,000, and one nugget in their possession was valued at £3,000. A considerable number of the passengers intended to return to Australia. This vessel, like the Marco Polo, brought news of the serious disturbance at Ballarat. In her voyage round Cape Horn the Kent had very fine weather, but fell in with some stupendous icebergs, sketches of which were shown by the passengers.

Other Shipping Arrivals. On the same day a merchant ship landed a passenger from the Grovelcotta, 154 days from Calcutta, and in the evening, Capt. Charleton landed at Hastings from Moulmein, by the ship Emma.

The Hastings schooner Harbinger, belonging to Messrs. Kent, after a detention of 8 weeks in the North, by adverse winds, arrived at Rouen with its cargo of coals, but Capt. Coppard, while writing home, said that although he had had many years at sea, he had never witnessed anything to equal what he experienced on the night of Friday, Feb. 16th, [when the sea froze at Hastings]. When off the French coast, the sea was very heavy, and as it broke on board it became immediately frozen. Sails and ropes were rigid with the frost, so as to make it almost impossible to work the vessel, but a stout vessel, a good crew, and a merciful Providence (which he gratefully owned) carried him safely through the sufferings and dangers of that terrible night.

More Passengers from Melbourne, seventeen in number, landed at Hastings on the 23rd of May. 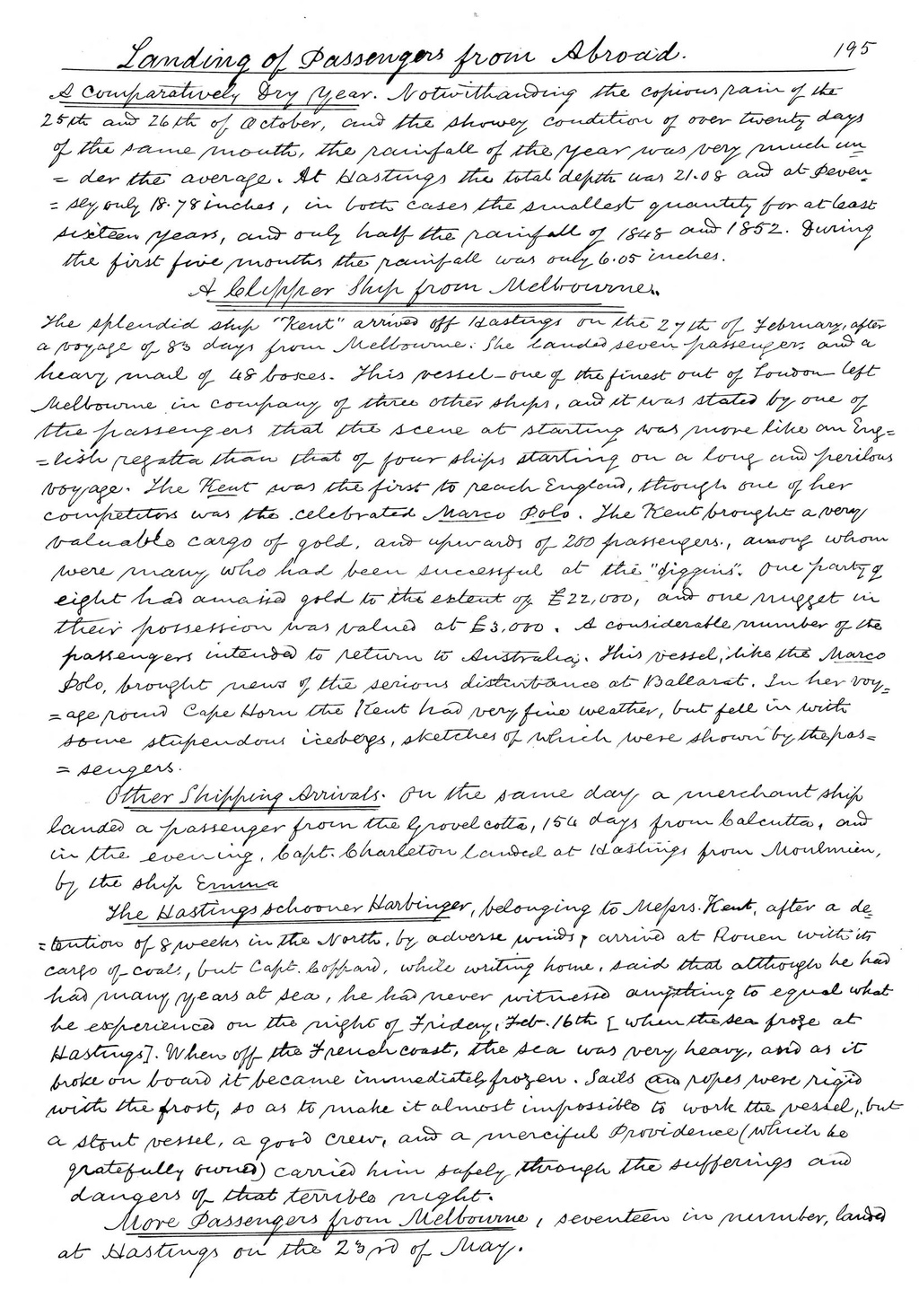