quantity distributed was 900 gallons of bread and 480 gallons of soup. 300 gallons of the former and 160 gallons of the latter were given out on March 6th. Two days later found the poor people in possession of 200 and 160 gallons respectively of the said provender, and on March 10th the same quantities. Two hundred gallons of bread were also delivered both on the 14th and 20th. This means of relief, together with the £160 from the Charity Fund to the two old parishes as previously described, saved the indigent population from starvation until more open weather gave employment to the labouring people.

During the week ending January 27th, a few of the Hastings boats in the western waters were successful in mackerel catching. Robert Foord, in the Charlotte, caught about 9,000 and sold them at Portsmouth for £94; Thos. Page, in the John Wightman, realized about £40; and James Sargent, in The Fame; sold his fish for £33. It was hoped that this partial success would have become more general, but the intense frost that followed completely thwarted the fishermen hopes and efforts. It also checked the taking of trawl fish at home. The fishery, indeed, was at a low ebb, and of course added considerably to the general distress. To this it may be added that the whole of the Hastings colliers were detained a considerable time at Harwich on their way to the North by adverse winds. The Burfield Brothers and the Harbinger with coals for foreign ports were detained eight weeks in the North even when they got there. The return of fine weather, however, brought a large quantity of fish to the Hastings fishing ground, which was very acceptable to the trawlers, although the mackerel season was a failure. The recent glut of conger eels which the intense cold enabled to be caught, realised money, howsoever small in proportion to the quantity of fish. Upward of fifty tons of these fish were sent off by rail.

A Singular Haul. Up to the month of July there was not much improvement in the fishery business upon the want of success during the previous winter season. One boat, however, belonging to William “Arch” Gallop was exceptionally fortunate. From a show of herrings off Hastings before the regular season, Gallop imagined that a trip to the North might be worth attempting. He went accordingly, and such was his success that carried into Lowestoff(sic) sufficient quantities of that species of fish to realise between three and four hundred pounds.

An Enormous Catch of Herrings, said to have been greater than ever before known for 50 years, commenced on the morning of Sunday, November 11th. The boats then brought in from three to four last each, the whole amounting to about 50 lasts (500,000 at the rate of 132 to the hundred). This of itself was a sight but rarely witnessed on the Hastings beach. The average price was £12 a last, and total amount realised was about £600. On Monday the quantities netted were from one to two lasts in each boat, and the price was about £10 per last. On Tuesday, the catches were still rather less in quantity and the average price £8. On Wednesday the quantities were greater than ever, with a selling price about £7 per last. On the- 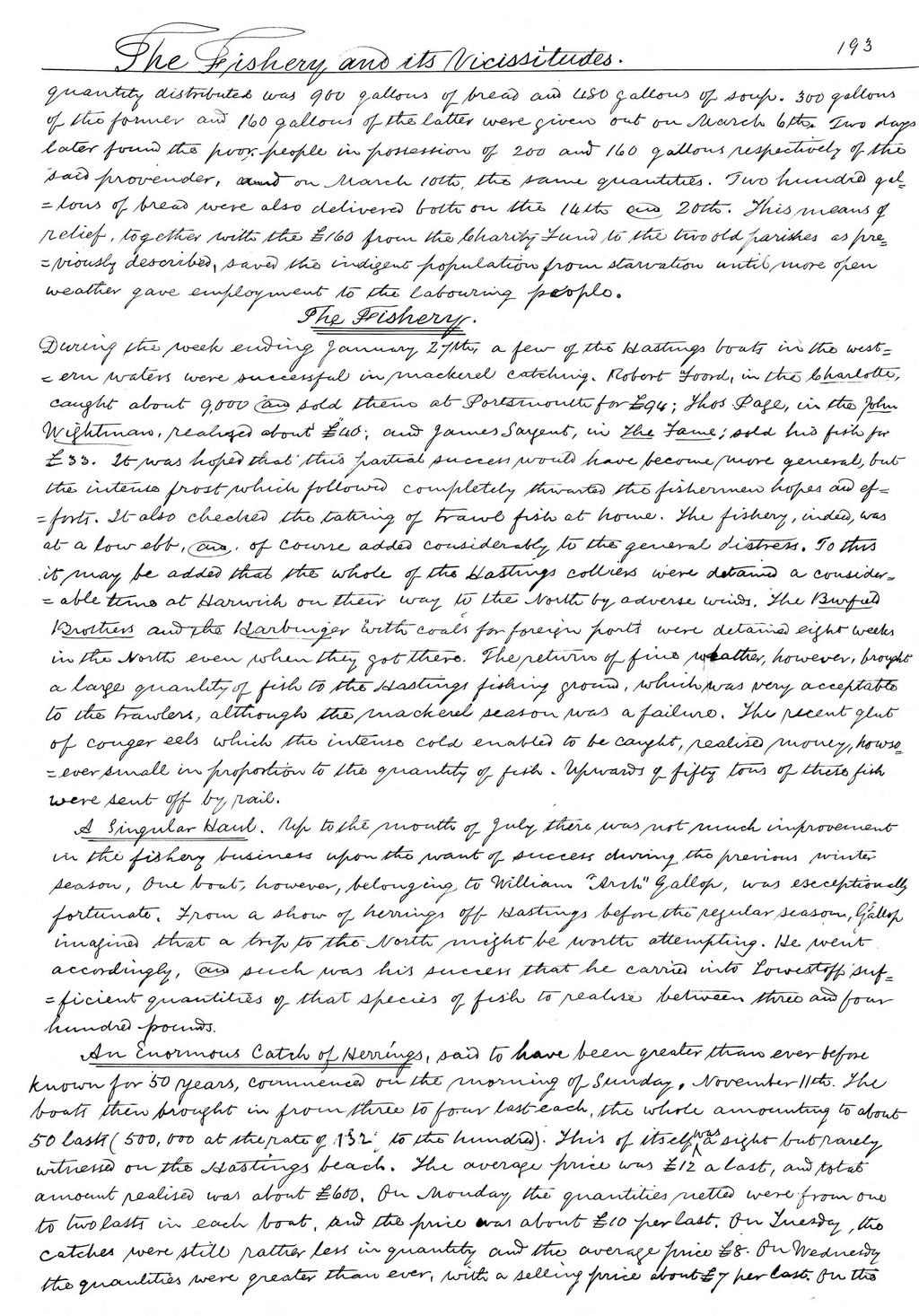