of a neatly fronted but small house known as Marine Cottage.

Mr. Hoof – who was known at Hastings as the contractor of a portion of the Ashford and Hastings railway, and whose son died at Hastings during the operations on the said railway – died of heart’s disease in London, and on the 18th of August, an inquest was held on his body and that of his wife, who, had died from the same sort of ailment. The deceased contractor left property exceeding half a million of pounds in value, and by his death, Sir Henry Muggridge, a London sheriff, became possessed in right of his wife, an addition to his fortune of about a quarter of a million.

Nomination of Sheriffs. The mention of a London Sheriff is a reminder that for Sussex Sheriffs, the Privy Council nominated William Crake, Esq., of Hastings, R. H. Nevill, Esq., of Midhurst, and William Lucas-Shadwell, Esq., of Fairlight.

Death Memorials. A memorial to the late Viscount Chewton having been suggested, just £50 was subscribed for the purpose, up to the date of Oct. 26th. A memorial to the late Rev. J. G. Foyster was also proposed by the townspeople, to consist of a suitable window in St. Clement’s church and the restoration of the chancel. For this, also, up to November, £144 had been subscribed. The contributors of ten guineas each were Earl Waldegrave, Countess Waldegrave, Rev T. Nightingale, Miss Sayer, Miss M. J. Sayer, Mr. W. Crake, and “a Friend”. Those who had contributed five guineas each were W. D. Lucas Shadwell. Mr. Staines, Mr. J. Phillips, Mr. W. B. Young, Rev. J. A. Hatchard, Miss North, Rev. H. J. Carter Smith, and Mr. J. Bishop. The subscribers for smaller sums were naturally more numerous.

For a Girls new School, the Countess Waldegrave at the commencement of the year offered to give £100.

An Annual Treat to the boys and girls of the same parish schools, about 600 in number, was given on July 6th, consisting of tea in the schoolroom and games on the East Hill. Among the ladies who assisted or who were present were Countess Waldegrave, Lady Elizabeth Waldegrave, Miss North, Miss Sayer, Ms. H. S. Foyster and the Misses Foyster. Countess Waldegrave had assisted at such treats about 40 years.

The St. Mary’s National Schools, of 160 boys and 200 girls had their annual treat on the 28th of July in the usual way of an indoor meal and outdoor games.

The Halton Schools, consisting of about 200 children, were given their annual treat on the 24th of August, which included a tea in the schoolroom and amusements in the Rev. J. Parkin’s own grounds.

A “Sunday-School Jubilee Tea-meeting” so called, was held in the Baptist-Chapel- 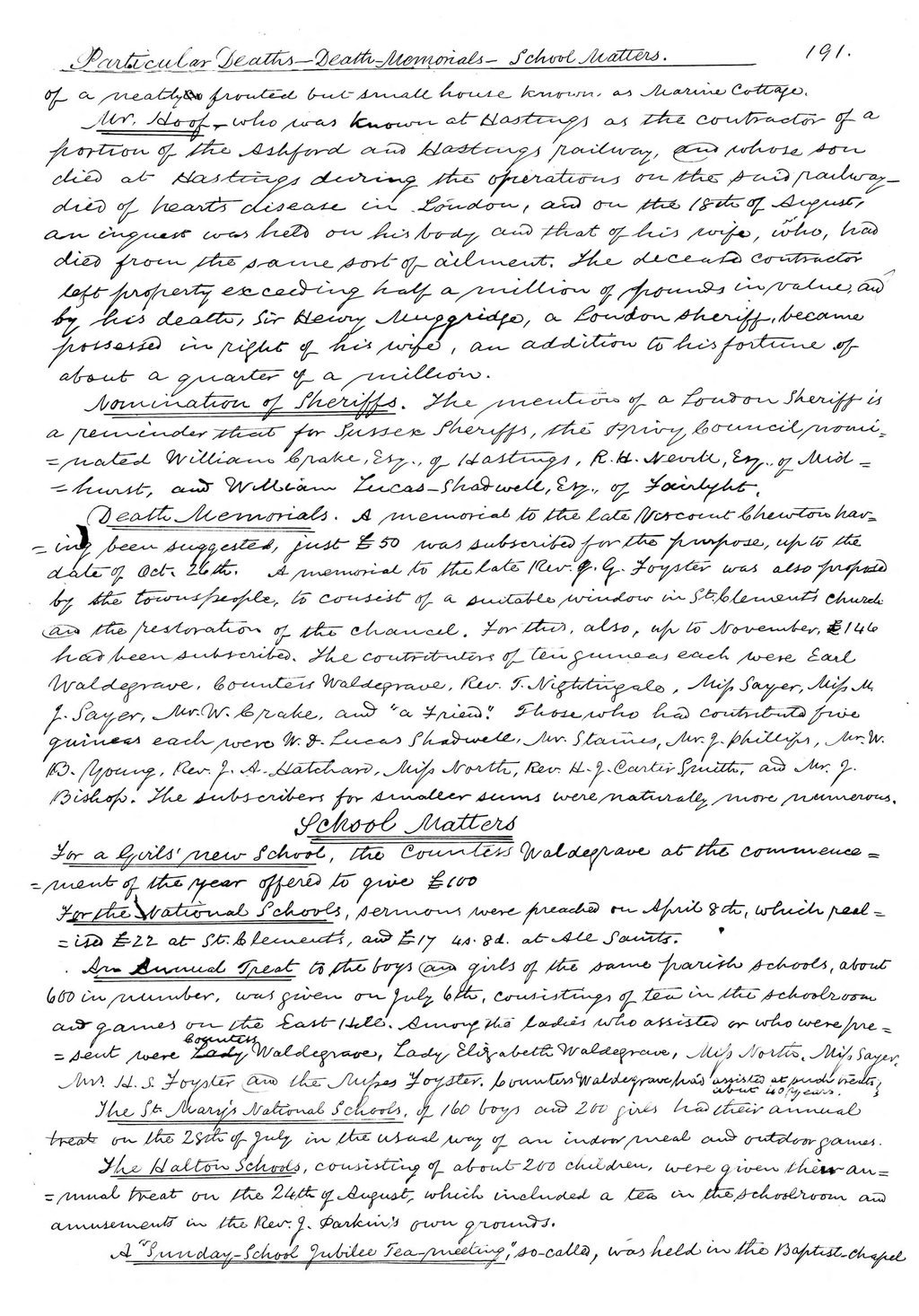