the Rev. Webster Whistler, in 1832, he having it was said, purchased the living of the Rev. G. S. G. Stonestreet, of Halton House. The two living had been for many years conjoined, owing to the smallness of income, but at Mr. Foyster’s request, they were separated, he retaining for himself the one of St. Clement’s. The deceased gentleman was several times out of health, and for some months before his death had been seriously ill. He was attended by Messrs. Ranking and Gabb, who, of course, did all that was possible for the recovery of their patient, whose piety, moral virtues and generosity were well known to the inhabitants. His death was felt as a great loss to the town. He left legacies of more than £4,000 to local and other associations, a list of which is given on page 162. The funeral took place on the 25th of May, at the All Saints burial ground by request of the deceased. It was a walking procession, the Mayor, Aldermen and Councilmen taking the lead, followed by some of the principal inhabitants, who were succeeded by the Rev. J. Wells, (curate of St. Clement’s) and the Rev. H. J. C. Smith (curate of All Saints). Then followed Dr. Wilmott and surgeons Ranking and Gabb. The next in procession was the Rev. H. S. Langton, who knew the deceased in early life, and was a favourite curate of the two parishes during the rectorship of the Rev. W. Whistler, 30 years before. The bearers of a rich pall were the Revs G. D. St. Quintin, W. W. Hume, J. Parkin and H. W. Simpson. The chief mourners were the Rev. H. S. Foyster and Mrs Cole, J. Grenside and Ms. H. S. Foyster, A. B. Foyster and Miss Grenside, G. A. Foyster, with Miss Foyster and Miss S. Foyster (his two sisters). Following these were the churchwardens, sidesmen, clerk, pew-openers and domestics. During the burial service in church, the Dead March and other musical solemnities were played on the organ by Mr. Giles in a manner as afterwards to elicit complimentary remarks by connoiseurs(sic). Prior to the commencement of the funeral arrangements, the Rev. H. S. Foyster (brother of the deceased) placed in the hands of the Mayor the list of legacies shewn on page 162.

Count Alexander de Vandes, a French gentleman and husband of an English lady, died at his residence, 14 Marine Parade, on the 23rd of July 1855, at the advanced age of 89 years. The funeral of this well-known gentleman took place in the All Saints burial ground on the 30th of the same month, and was witnessed by a great number of townspeople who were present at the church and on the ground. While living, this estimable man was always ready to respond to the call of the needy, and had been known to express regret when the promotors of any charitable object had accidently neglected to call on him. The house in which he resided so many years was specially built for him on the site- 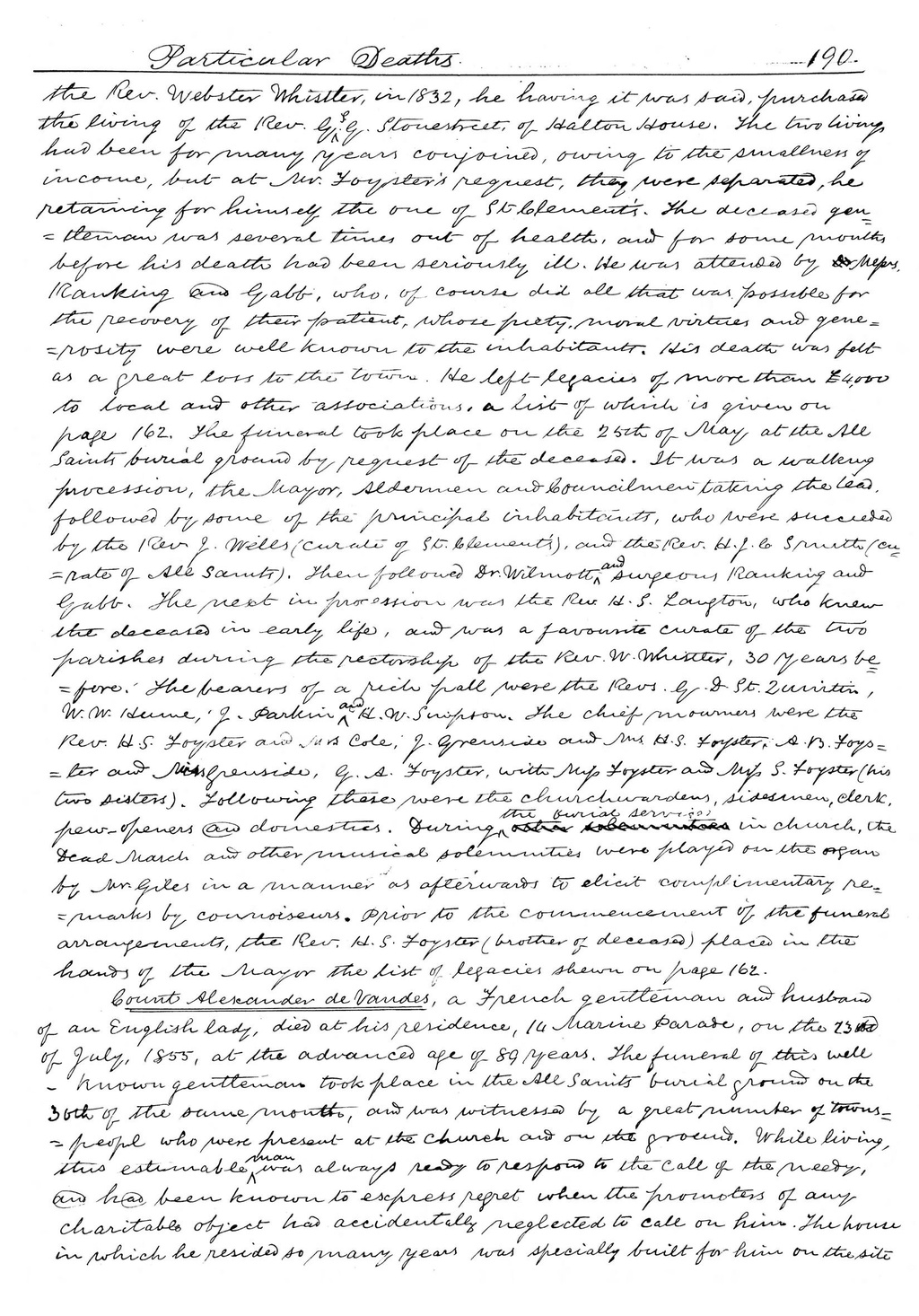