The Rev. William Davis, the estimable minister of the Croft Chapel, died at his residence, Gloucester place, on Friday, Jan. 19th, in his 67th year. He was born in London on June 15th, 1788. He came to Hastings in 1818, and was finally settled in the pastorate of the Croft (Independent) Chapel on the 6th of December. For 35 years he sustained the duties alone, but on the 31st of December, 1853, the Rev. George Stewart became his co-pastor. In 1836 he founded the British School for girls, under the patronage of the Duchess of Kent. A Sunday School existed at the Croft Chapel when Mr. Davis came and it was claimed for it to have been the first of its kind established in Hastings, but, such was denied by Mrs. Milward and others, the latter contending that a Sunday School in connection with the St. Clement’s and All Saints churches had priority. (See reasons for and against in Brett’s Rhymed Reminiscences). Mr. Davis also established the local Auxiliary of the British and Foreign Bible Society, in connection with which he was an active secretary until shortly before his death. In 1831 Mr. Davis was one of the Committee for establishing and framing the rules of the Literary and Scientific Institution. He also took an active part in establishing and upholding the Mechanics’ Institution. Many excellent lectures were delivered in connection therewith by this amiable and hard working gentleman. He was greatly esteemed by his congregation, whilst in addition to his ordinary ministrations, he pursued a course of deeply thought-out literature, among which published productions were “The True Dignity of Human Nature,” “The Salvation and Faith of the Christian,” “The Narrow Way”, and a number of pamphlets. He was one of the several lectures against Popery (See Memoirs of Rev. W. W. Hume in Historico-Biographies) Mr. Davis was of small stature and never a strong looking man; and, at about six years before his death, he exerted himself greatly in connection with the Congregational Union of the County, from which he returned much exhausted. He was soon overtaken by a fit of illness which left its mark upon him, although he temporarily recovered. His vitality continued to decline, and on the evening of the 14th of January, 1855, he became confined to his bed, and died as before stated on the 19th, with a calm and happy assurance of a blissful immortality. Never was more greatly loved by all who had the pleasure of his acquaintance – Dissenters and Churchmen alike. A widow and six children survived to mourn his loss.
The Rev. John Goodge Foyster died at the St. Clement’s Rectory, 106 High street, on the 17th of May, 1855, at the age of 73. He entered the rectorship of St. Clement’s and All Saints soon after the decease of- 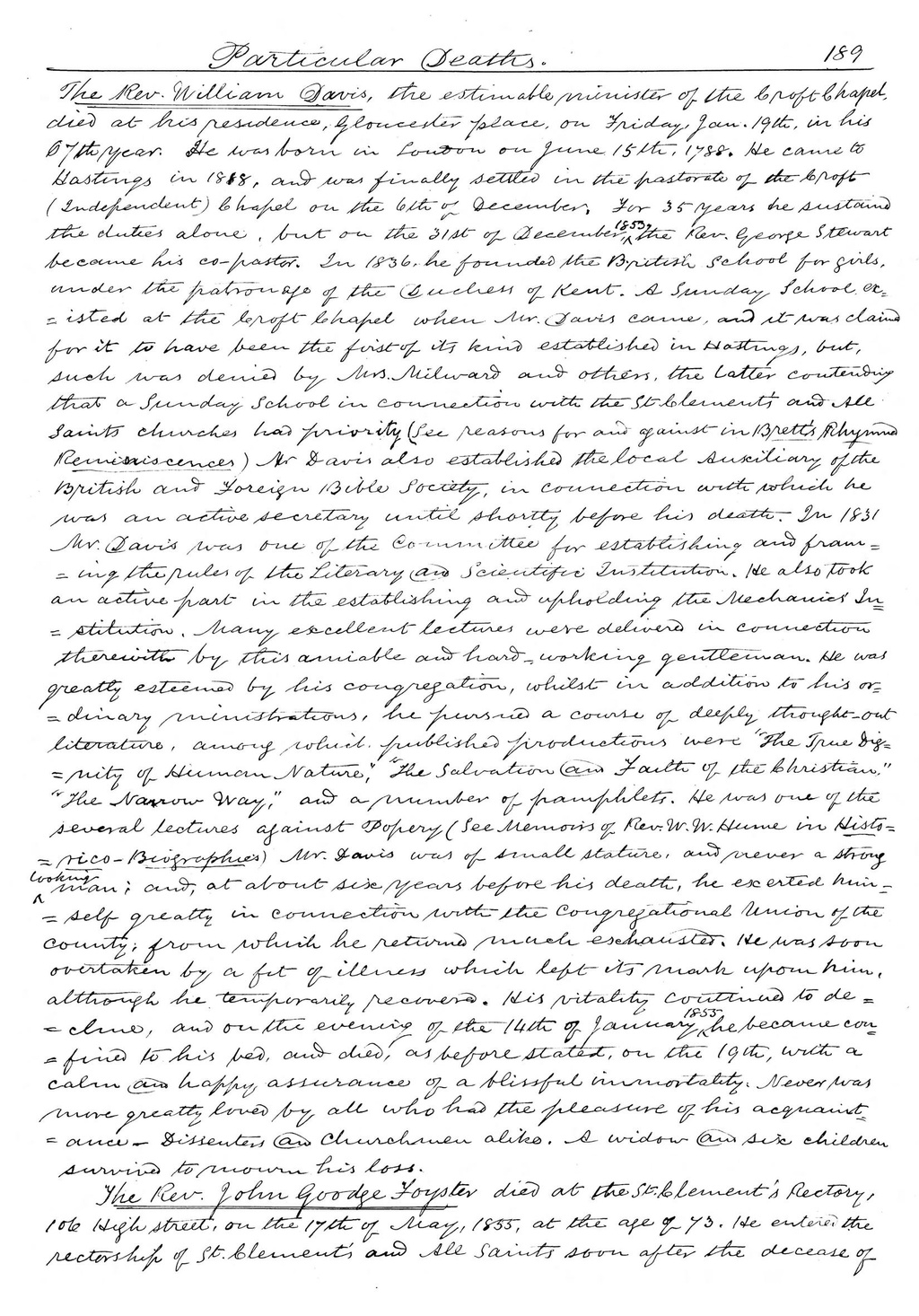