In the spring of 1855, the authorities at Ore, with the object of providing additional ground for the interment of the dead, were in treaty with the Countess Waldegrave for 1½ acres of land in the triangle formed between the road leading to Rye and a bye road to Coghurst, on Fairlight Down. The purchase of the ground, the necessary wall and a small chapel were extimated(sic) to cost £500, one half of which it was said, the Rev. W. T. Turner had promised. All matters were agreeably arranged, the ground was prepared, the wall built, &c. during the year, and on the 16th of December, the Bishop of Chichester consecrated as a burial ground for the parish of Ore.

The death of Archdeacon Hare occurred at the Rectory, Herstmonceux, on the 23rd of January, at the age of 59 years. This venerable Archdeacon of Lewes was almost as well known at Hastings, and in any other part of East Sussex. His relative, Major Robert Hare was married to Miss Charlotte Fuller (a nonagenarian at death) the youngest daughter of the Rev. Thomas Fuller, many years rector of Hastings. Mrs. Major Hare was also a sister of Miss Fuller and Mrs. Schaedler, of Hastings. Besides being vicar of Herstmonceux and a prebendary of Chichester Cathedral, Archdeacon Hare was one of Her Majesty’s chaplains. As an author his name was familiar to most readers throughout England and some other parts of Europe, it being generally admitted that he was a profound thinker. He had the credit of being the leader of the broad church party, but those who him best declared that he would be the first to deny it. It was his wish, they said to belong to no party, but to join all parties in the Church of England where good work was to be done. Among his labours was a willing co-operation in reviving Convocation, where he was frequently on the committees, and as frequently a speaker in the lower House. The tolerant tenour(sic) of his words and advice were said to be most valuable in appeasing the strife of opposing spirits. Agreeably to his own request, his mortal remains were interred in a steined grave in the churchyard at Herstmonceux instead of in the family vault. The body was borne to the grave by 12 labourers in craped white frocks. Upwards of 30 clergymen attended the funeral, six of them bearing the pall. About 400 persons followed on foot, including Mrs Hare and several other ladies, and during the service all kinds of trade in the neighbourhood were suspended.

The death of Janet, the wife of F. North Esq. M.P. occurred at Hastings Lodge at about 2 p.m. on Wednesday, January 17th. Great sympathy was shewn towards the esteemed Member under his painful bereavement. She was the daughter of Sir John Marjoribank, and her remains were interred at Halton. 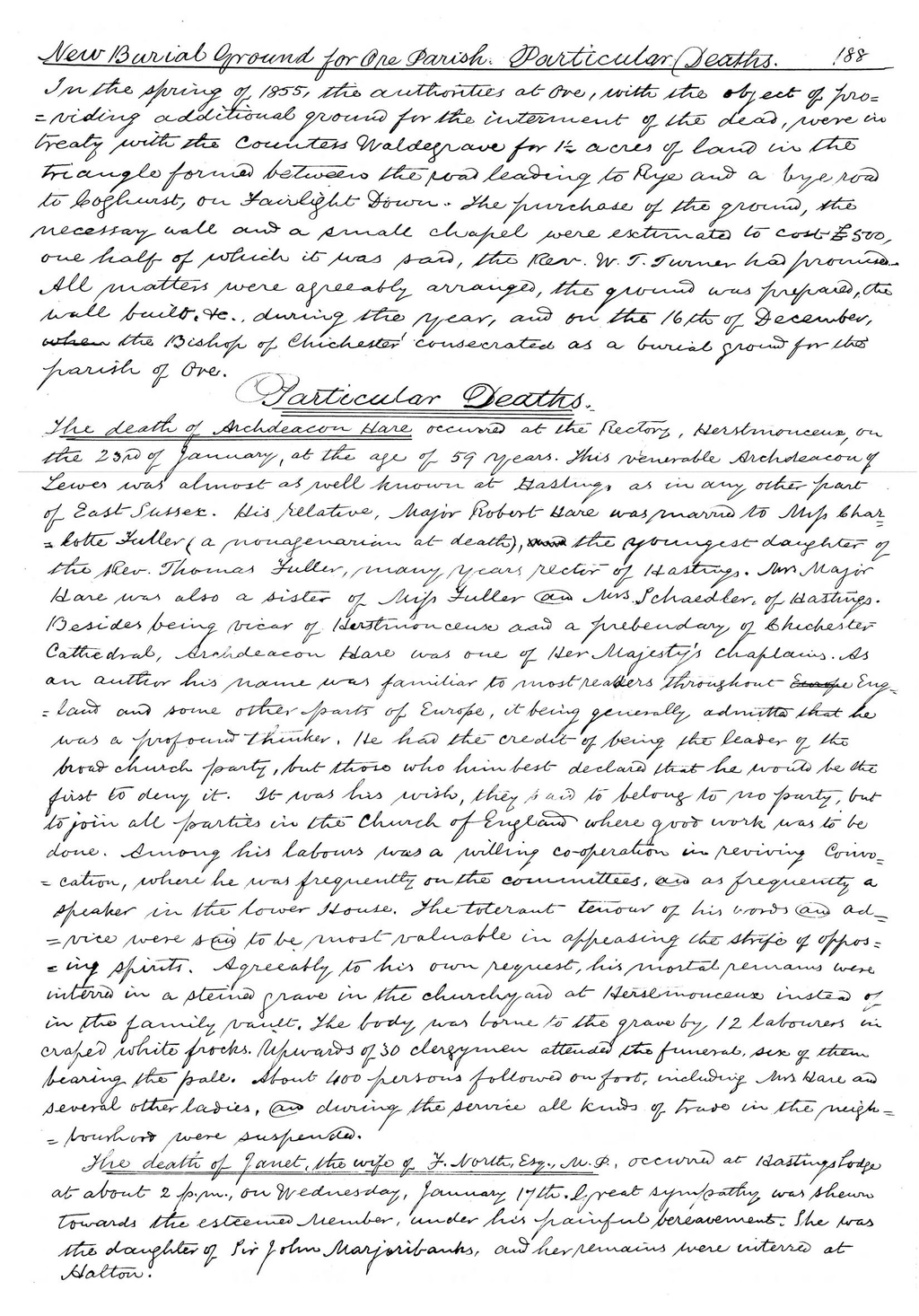