At an All Saints’ vestry on the 27th of March, a poor rate, including the borough rate was levied at 1/5, and at a St. Clement’s vestry the combined rate was one shilling in the pound.
At a Castle Parish Vestry on May 10th, an official notice was received from the Poor Law Board for the removal of Mr. Everest from the office of collector, whose deficiency to that parish was over £217 of the poor-rate and £14 of the borough rate. A fortnight had been given to the sureties for paying the money. After much discussion it was resolved to have, instead of a collector, an assistant overseer, his remuneration to be 6¼d. in the pound and his bond to be £300.
An All Saints’ Vestry meeting was held on the 8th of June, when the Clerk (Mr. G. Meadows) read a communication from the Town Council to the effect that that the petition to her Majesty in Council for Burial Board powers was for the whole borough. Mr. Harvey said the Town Council were not reasonable men and could not be trusted. He therefore moved “That as this parish is amply provided with burial ground and had been granted an extension of time till 1860, it is inexpedient to be included in the other parishes”. This was seconded and carried. At a later meeting (Aug. 16th) the extension of time having been confirmed, it was resolved that common graves for children of the parish be 7/6 instead of 10s. and steined graves be £4 10s. instead of £3 10s. Other graves as theretofore. It was further resolved that the fees for burial of non-parishioners which before had gone to the aid of church-rates, be invested in the Savings Bank to help pay the parish’s share of the general cemetery expenses. Thus, although the new cemetery when ready was available for all the parishes, interments continued in the new part of All Saints’ burial ground until 1860. The St. Leonards ground was also open for the same extended period for the burial of the St. Leonards and St. Mary Magdalen inhabitants, as well as visitors.
The Trinity Parish at a vestry meeting on the 18th of August, levied a poor-rate of 4d. in the pound. The Castle parish (in November) passed a poor-rate of 5d. and the All Saints’ parish elected Mr. Sampson as assistant-overseer.
Parish Overseers. At the Town Hall on the 7th of April, Edward Hunter and James Rollason were appointed overseers for Guestling; Hy. Noakes and Abraham Thorpe for Pett; John Cook and Jas. Field, for Fairlight; John Stace and Edw. Gladwish, for Ore; Arthur Sawyer Brook and Wm. Peppercorn for Bexhill; Wm. Payne and Rich. Lamb, for St. Leonards; Chas. Amoore & C. W. Chandler for St. Mary-in-the-Castle. A poor-rate at 2/- for Bexhill was allowed by the magistrates. 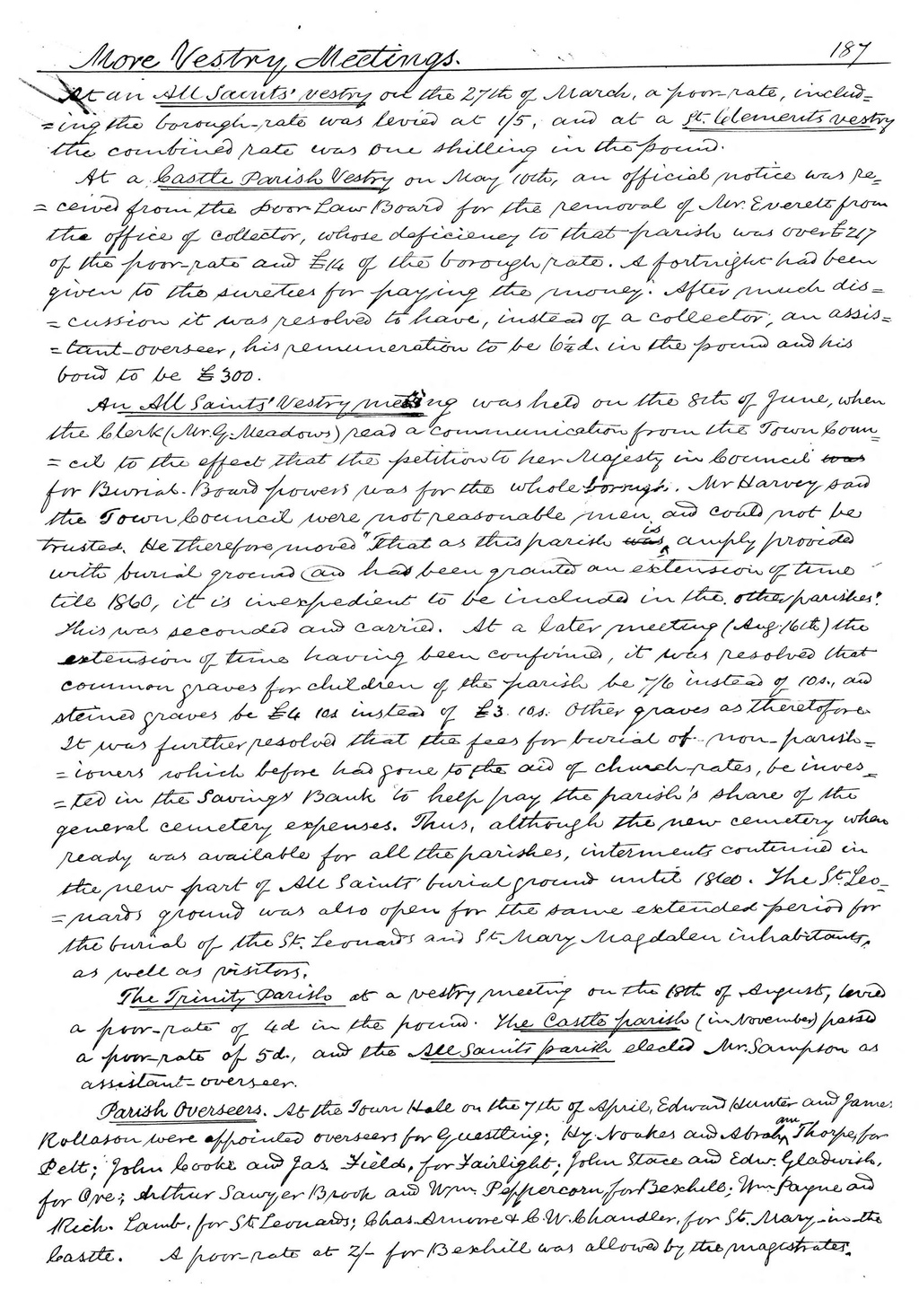