farthing more than is necessary. I own I am not able to affect moderation and gravity in the midst of that distress I see around me which is seen in my more philosophical neighbours, and if I have not observed the usual blandishments of good breeding, my plea is I have never been practised in shams.” [Mr. Vidler’s excuse for exerting himself against the purchase of the Magdalen land, which would have enriched the Charity of that name, and consequently have benefitted two parishes that were at least three times poorer than his own, was that owing to the stagnation of business made him anxious to avoid laying on his fellow parishioners one farthing more than was necessary. But how does this sentiment square with his admitted statement at the vestry meeting that his house would be worth £100 more if Miss Sayer’s land were purchased for the cemetery; or where was his consistency, when, as a poor-law guardian, he voted for a rate-collector’s sureties paying only £300 instead of their bond of £500, the defalcations of the collector being £600, and the amount of which his own parish was defrauded being £231? Verily the public actions of some men and their explanations of the same if not contradictory, are at least curious.]

Mr. T. Ross, also in a letter to the News, wrote as follows:-

“It was with fear and trembling that I read your challenge to me in last week’s paper concerning the rockiness of the soil on Blackland’s farm and the Magdalen land. I am extremely sorry to have been one of the means whereby your wrath was kindled, but I humbly submit that it was unintentional on my part. Having looked into every hole except one that was dug on the Magdalen, that one being full of water, and believing what I saw, I stated at the meeting that which I still believe – namely, that Blacklands is not more rocky than the Magdalen. I know I do wrong to differ in opinion from the leading article of the leading paper in the town, but like Topsy, ‘I ‘spects I am very wicked! P.S. Please excuse my not answering the words which, I presume, are Latin, a language which I do not profess to understand.”

The New Burial Board. On Wednesday morning, Aug. 15th, an order from the Queen in Council was received, giving full power to the Town Council to act as a Burial Board, and to include every parish or part of a parish in the borough.

The Magdalen Charity – the land of which was so much in question during the year – afforded from its revenues in January £64 to the poor of All Saints and £96 to those of St. Clement’s, and much it was needed during the snow and severe frosts of that and following month. 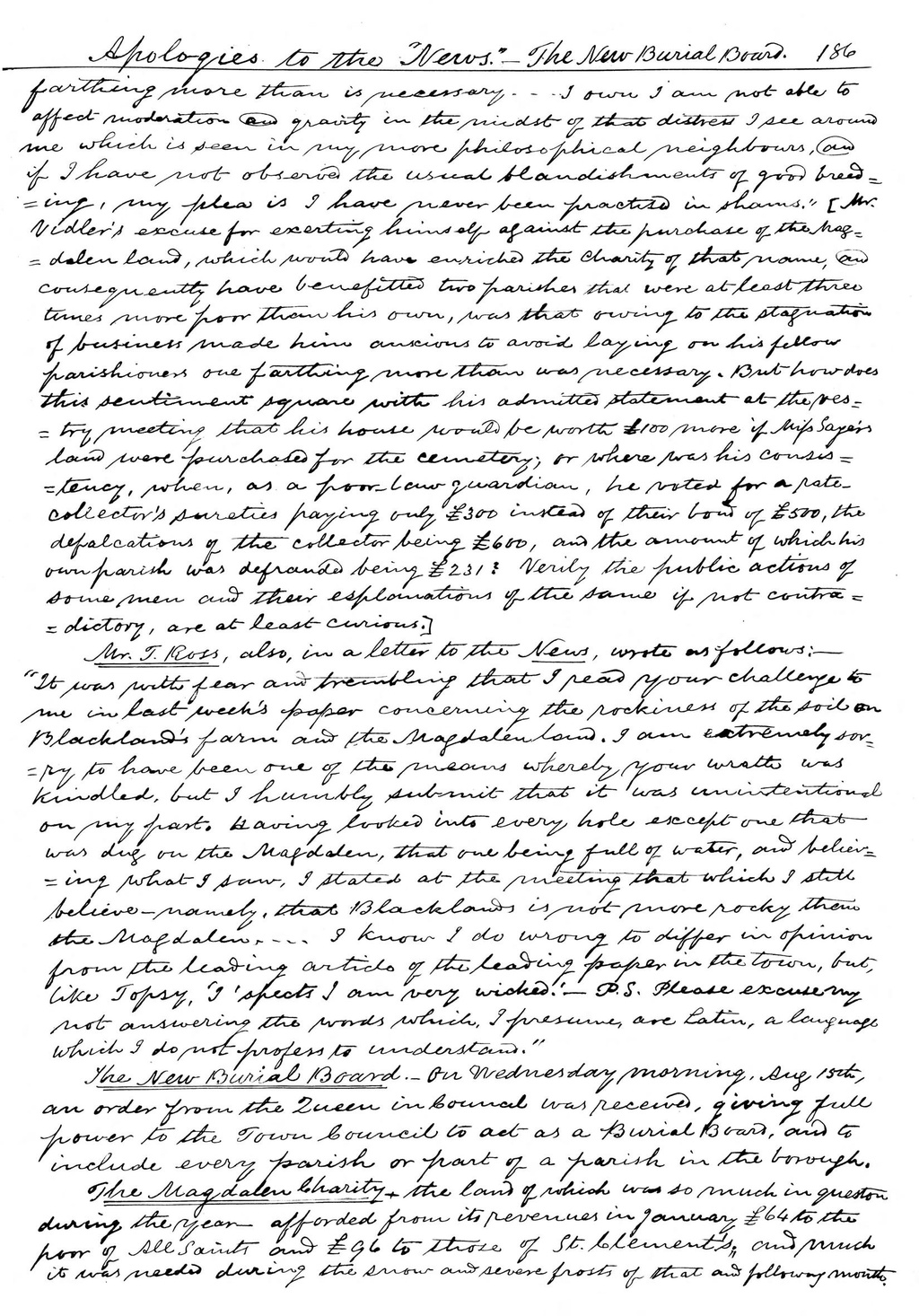