must have lived at some time, because it has incurred pecuniary responsibilities. If we are to suppose that the Board ever did live, and that it ever did die, we must admit that it was a very honest Board, for all its bills are paid. We must also allow that the Board was very hardly treated, by the parties with whom it came into contact, for it has somehow expended £170 and obtained nothing in return. Not only was this ill-treated Board forbidden to find time and place to die, but when the catastrophe seemed unavoidable, there were those who refused their sanction of the transmission of the melancholy intelligence to those who were likely to attend to the dying wishes of the chained Prometheus. It was not to be whispered in the ears of the Town Council, nor was it to be wafted to the doors of the Home Office. Happily, the latter request was granted, and with that the attendants departed from the scene, the clerk telling them he should never ask them to come again, and some few wishing, perhaps, that they had never been asked to come at all. However, they departed from many a tough struggle, and proceeded on their way – Mr. Putland and his colleague to stir up another phoenix from the ashes, to illuminate the western horizon; Mr. Smith (St. Michaels-on-the-Rock) to implore that his patron saint might be taken into the favourable keeping of St. Leonards and St. Mary Magdalen; Mr. Vidler to exult in getting rid of the unfortunate deceased, and to calculate how many hop-poles and bavins were growing on the Blacklands farm; Mr. Ross to investigate the rocky strata of the Magdalen ground and to ponder on the advisability of going west; and last, but not least, the despairing clerk, pro tem, to send a black edged note to Sir George Grey, informing the Secretary of State that after a protracted and painful illness, the Hastings Burial Board had given up the ghost, its untimely end being mainly due to defective legislation and the obstructive character of local peculiarities. Sic transit gloria mundi.”

Mr. Alfred Vidler, in a letter to the News, wrote “As I had the misfortune to bring down upon my luckless self the whole weight of your terrible indignation for incontinency of tongue, I shall be careful not to provoke another such a visitation by incontinency of pen. The condition of many of my poorer parishioners are reduced to by the present stagnation of business and employment, created in my mind a strong desire to avoid laying on them one- 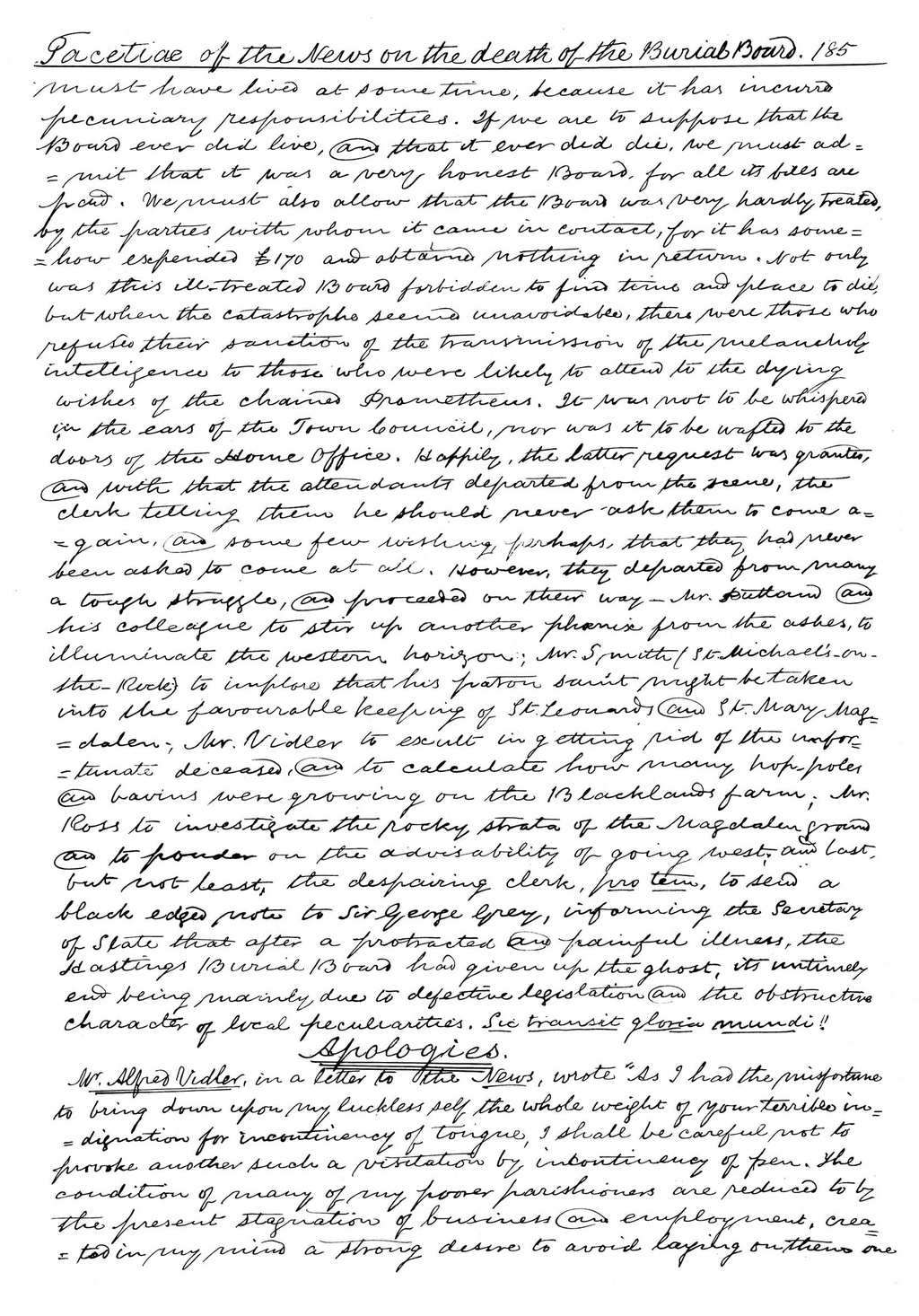