Mr. G. Curling Hope would vote against that, as he knew that his parish (Holy Trinity) did not want to go under the Council. A motion was then made, and carried by the vote of the chairman, that a representation be sent to the Home Office. The troubles and condition of the all but defunct Burial Board were well defined in a leading article of the Hastings and St. Leonards News of April 13th, as follows:- “The Burial Board, after a troubled existence of 13 months, is fairly lost in a fog. Some of its quandam friends declare it to be dissolved, while others argue that it still exists. Mr. Putland thinks he has succeeded in analyzing the Board into a sextuple existence, each division having the principle of vitality still powerful within. Some consider it defunct, others asleep, while some cite Acts of Parliament to prove that the Burial Board is a kind of Sextarchy. As in most important cases, doctors differ, and as there are two doctors there are two different opinions. ‘Doctor’ Serjeant Byles considers the Board to be not only alive and kicking, but to be absolutely indivisible and immortal – something far too spiritual to be knocked on the head by Mr. Vidler’s shovel, and far too refined to be cut up into sections by the dissecting knife of the West Ward gentlemen ‘Doctor’ Pashley, who is a sort of Queen’s physician, and in the opinion of Messrs. Beecham & Son, a man who ought to know, has strong faith in the endurance of the unfortunate patient, but has no notion of indivisibility. With the skilled practitioner of the Temple the Burial Board is like a zo-ophite which may be severed ad libitum each limb or parish still retaining its vitality, so that the West may say to the East, ‘I have no need of thee’. The Clerk to the Board, who is said to be no Clerk, and to possess only a shadowy existence, pro tem, fleeting, and soon to pass away, cites the statute book, to show that the Board is indivisible, and that the legislature intended to bestow upon it an eternal juvenility, a perpetual succession, a corporate existence, which no parochial perversity should ever destroy. According to law, it would seem that the Board was destined to a kind of immortality; but according to fact, the Board seems collapsed – inert – defunct – departed. Truly, if we may consider it dead, it died hard, for it was made a strange matter of doubt whether it could die at all – whether, in fact, the law allowed anything so indecorous. There are, indeed, some metaphysical beings who doubt whether the Board ever lived, inasmuch as it never did any good, but Mr. Womersley (who not being a doctor, must not be considered as speaking ex cathedra), has suggested that the Board- 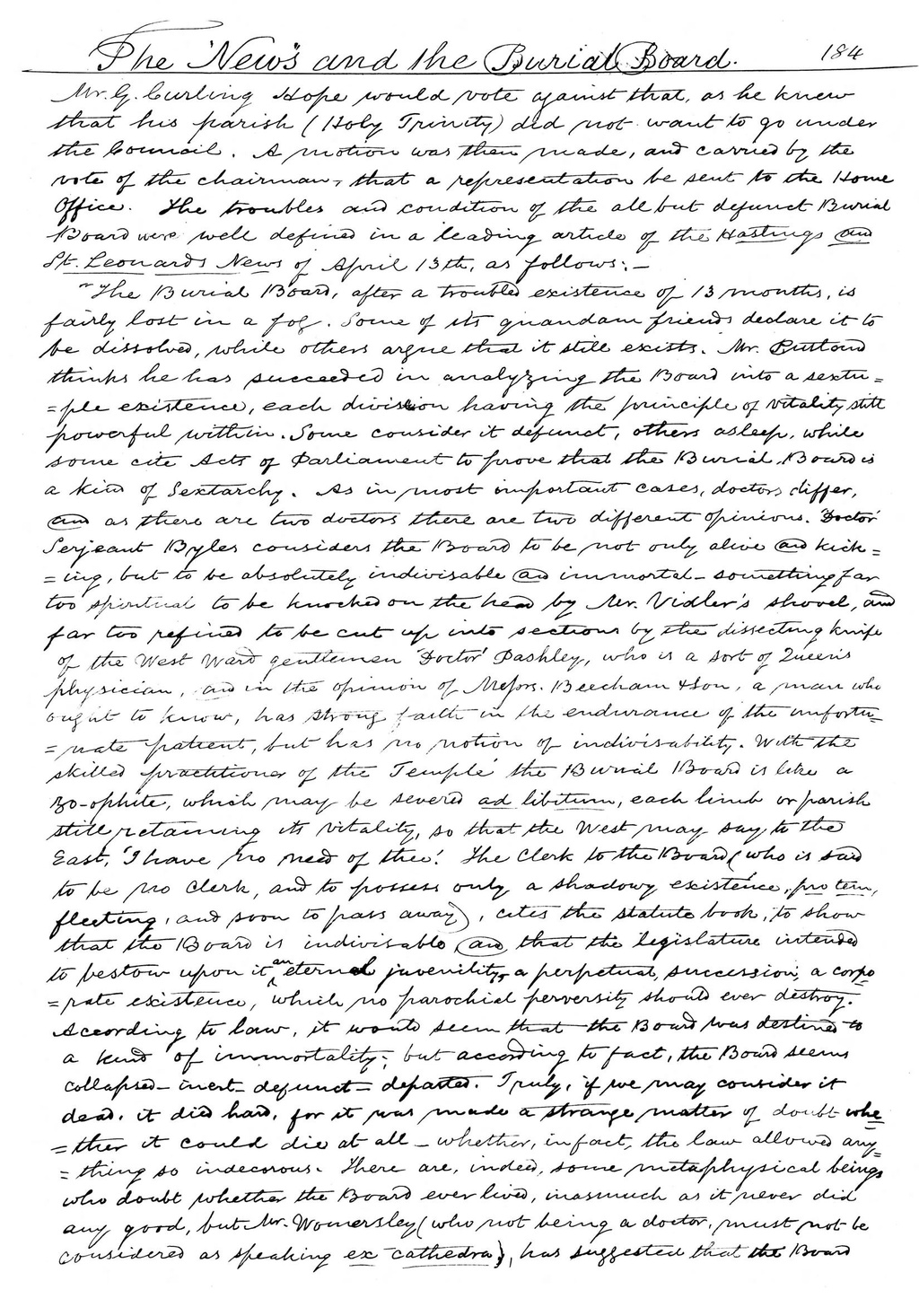