what he himself had done. Mr. Putland was sorry Mr. Vidler should be so personal, and Mr. Womersley could not avoid entering his strongest protest against Mr. Vidler’s personal attacks on one who, as a Christian minister, stood perhaps the highest in the town. Mr. Poole said it appeared to him that the Board had got into such a state that it was impossible for it to act any longer. He did not mean to say that jealousy had prompted Mr. Peerless and Mr. Putland to object to the Blacklands site. He admitted that the western parishes had much more reason to object to Miss Sayer’s land than the Castle parish had to object to the Magdalen land. Mr. Vidler had entered into a very rambling statement, but in a month’s time, when the parish would be without a burying-ground, the parish would see whether Mr Vidler was right. That gentleman might have their applause now, but the time would come when he would have their reproaches. He (Mr. Poole) would move that the Town Council be requested to take the matter into their own hands. Much discussion ensued as to whether the Burial Board could legally dissolve, and whether any of the parishes could withdraw, in the course of which it was stated that the two western parishes were not compelled to close their burial ground as were the others, and that after that meeting, they intended to take counsel’s opinion. Mr. Womersley then moved as an amendment to Mr. Poole’s motion that the Board adjourn for a week, which was carried.

The Adjourned Meeting being held , it was there shown that the parishes had contributed their quota of the expenses, and that all bills had been paid. Mr. Putland said he would have liked for all the parishes to act unitedly, but as that appeared to be impossible, he thought the most sensible course would be for the western parishes to separate. He then handed in the promised counsel’s opinion, together with the case on which it was founded; also a letter from a firm of London solicitors to Messrs. Beecham & Son, solicitors, at St. Leonards, testifying to the high standing of the consulted counsel. This opinion was to the effect that the western parishes could withdraw from the Burial Board, and provide a cemetery of their own. On the other hand, a counsel’s opinion had been obtained by the eastern members of the Board, which differed entirely from the first named opinion. Mr. Nicholas referred to the St. Leonards Church Act, which gave the right of burial in the St. Leonards ground for both the western parishes, and which no government authority could close. He calculated that there was yet space enough for the next five years. Mr. Putland remarked that the two western parishes intended acting upon the opinion they had obtained by withdrawing from the Board, and then they would be free to act with any other parishes that were willing to work with them. Mr. Womersley moved that a representation be made to the Town Council that the Burial Board found it impossible to act, although, for himself, he had no confidence in that body. 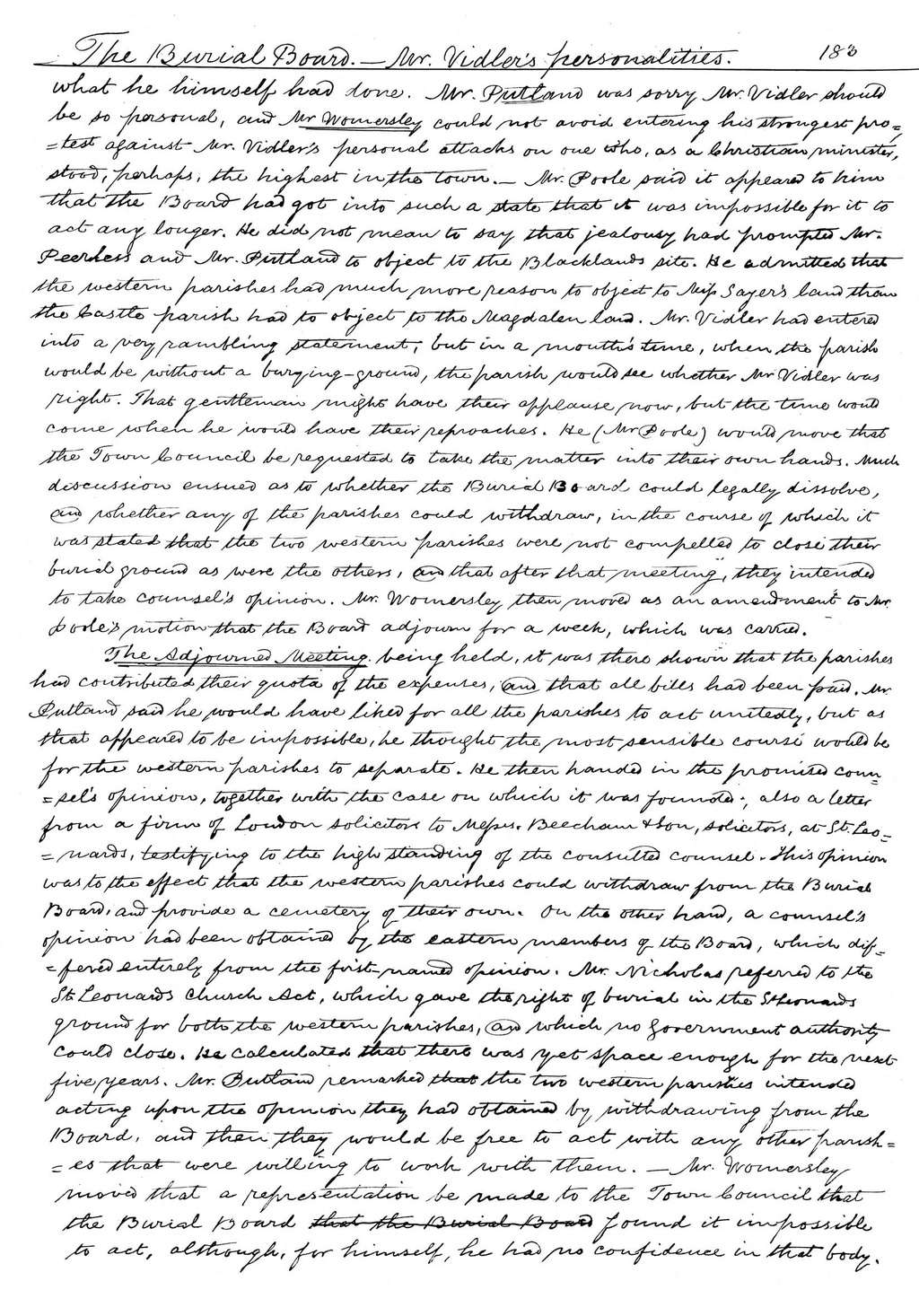