for his quondom(sic)friend Vidler, who, in an endeavour to force Nash back from his threatening attitude, fell, with him, over a form. The violent disturber was then expelled, and this brought Mr. Ball, (formerly a wheelwright) into the room, who indignantly remonstrated with the meeting for ejecting the disturber. Mr. Womersley concluded by moving the approval of the Burial Board’s report, and authorising the necessary outlay on the Magdalen estate. Mr. Yates approved of all Mr. Womersley had said, and seconded the resolution. After Mr. Ross’s expression of entire dissent, Mr. G. Scrivens said he came to the meeting to support the Burial Board, who had worked hard and done their best in the public service. He did not consider that they had a choice of two sites, and on that meeting depended whether they should have a cemetery at once, or the matter be abruptly stopped. He should be sorry for the work to be thrown on the Town Council, seeing that it had already too much to do, and did not do its present work so, well as could be wished, for that he was willing to take his own share of blame. It was not merely a parish question, but one which affected the whole town. As for things going west-ward, it was a remarkable fact that they generally did so, as in London, in Brighton, and America. There was not a quarter of a mile difference in the two sites, and the roads afforded a much better access to the Magdalen than to the other. On the whole, he thought, it was quite the best site, and he hoped that parties would not be governed by personal and narrow minded views, but vote for that which would be best for the whole borough. Mr. Womersley rose to reply and was desired by Mr. Clement to cut it short. He said there was really very little to reply to, but he could not allow certain fallacies to go forth uncontradicted. The Castle parish had no right to cause the Burial Board an expenditure of £200 and a waste of twelve months’ time unless a very good reason for the opposition could be shown. The votes were then taken by a show of hands, when about 34 appeared for the motion over 50 against. A poll was demanded to take place on the following Monday, when out of 635 voters on the parish books, only 241 went to the poll, and of which there was a majority of 59 against the Burial Board.

A Meeting of the Board was held on the following day, when it was shown by the Clerk (Mr. J. Phillips) that in addition to the £119 previously spent by the Board, there was a sum of £51 10s. to be raised for the payment of bills. The proportions would be about £10 from St. Clement’s, £15 from St. Mary’s, £4 from Holy Trinity, £1 from St. Michaels £16 12s. from Magdalen’s, and £4 9s. from St. Leonards. Mr. Vidler referred to the previous meeting and reprobated what he called the influence of a banker (Mr. Scrivens) and a clergyman (Mr. Vores) being brought to bear on the subsequent polling. The parish, he said, never had a clergyman more looked up to than Mr. Vores, but when he brought ladies to vote at a public house, he placed himself in a position he ought not to occupy. Mr. Poole charged Mr. Vidler with attacking a gentleman for doing- 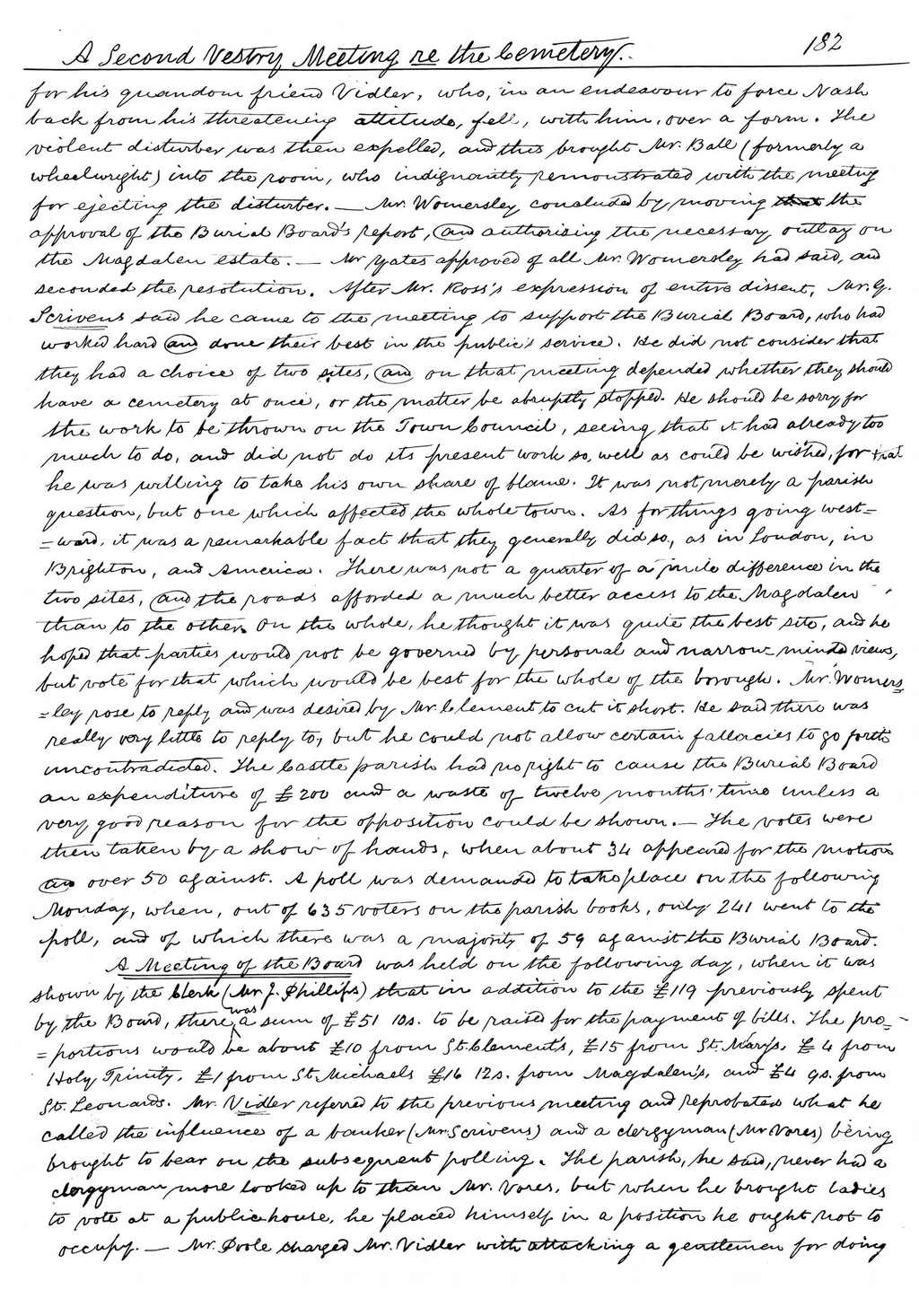