the large room of the Royal Oak Hotel, with Mr. C. F. Mott in the chair. It was not only a crowded meeting, but also at time a noisy and turbulent one. Mr. Vidler said as his name had been banded about pretty freely by the press, he hoped the press would be merciful to him. He had been accused of packing the previous meeting. and if had so packed the cards, he would play them out. He then indulged in personalities which had no bearing on the question, and was frequently interrupted by cries of question. But he considered himself to be quite in order. There was, he said, that little planet called the Hastings Rag which had found a cock’s nest in a shaw of three acres on Miss Sayer’s land, but if they allowed the wood to come to maturity it would pay for turning it into an ornamental pond. Much also had been said about the road, but he would undertake to widen it for £100. There was a quarry of stone, and he would risk the taking it without purchase. When Mr. Putland once set his head upon anything, there was no turning him from it. [Many persons thought that such description applied to Mr. Vidler, himself; for whether his views were right or wrong he clutched them with a persistency so great that to dissuade him from them was judged to be impossible. He would stick to them at all hazards, and it may be that it was this feature in his character that obtained for him the sobriquet of “Sticky” Vidler.] Perhaps Mr. Putland was looking out for a job of building a mile and a half of wall round the Magdalen site. At this insinuation Mr. Burchell, a stonemason, cried “Shame”, whereupon Mr. Vidler said Oh, perhaps Mr. Burchell wanted to do it. He (Vidler) had been in Hastings 40 years, and in business 32, except one year when he was out of health, but he was now strong. [“Yes, headstrong”, someone suggested]. Referring to the speaker’s irrelevant remarks about Mr. Putland, Mr. Burchell said he had heard Mr. Vidler say that his house in St. Andrew’s terrace [now Queen’s road ] would be worth £50 more if Miss Sayer’s land was selected. Mr. Vidler would admit it, for he was not afraid of a hearse going by his house. Mr. Womersley, in a lengthy and temperate speech, explained the great difficulty the Burial Board had experienced in selecting a suitable site, and the necessity for compliance of the Government to construct a cemetery within a stipulated time. It was now, he observed, not a question between Miss Sayer’s land and the Magdalen land, but between the latter or none at all. One objection, he found, was the old question of East and West, though he hoped the present meeting did not entertain that feeling. If there was a parish that could afford to bunk that idea, it was the Castle parish, seeing that it was in the very centre of the two extremes. This speaker had been several times interrupted by a Mr. Nash, and had good naturedly borne with him, promising him a hearing later on. The Chairman also called him to order several times. At last, amidst much confusion, Nash said he couldn’t sit still, and then went towards Mr. Womersley in a menacing manner with clenched fists. This was too much even for his- 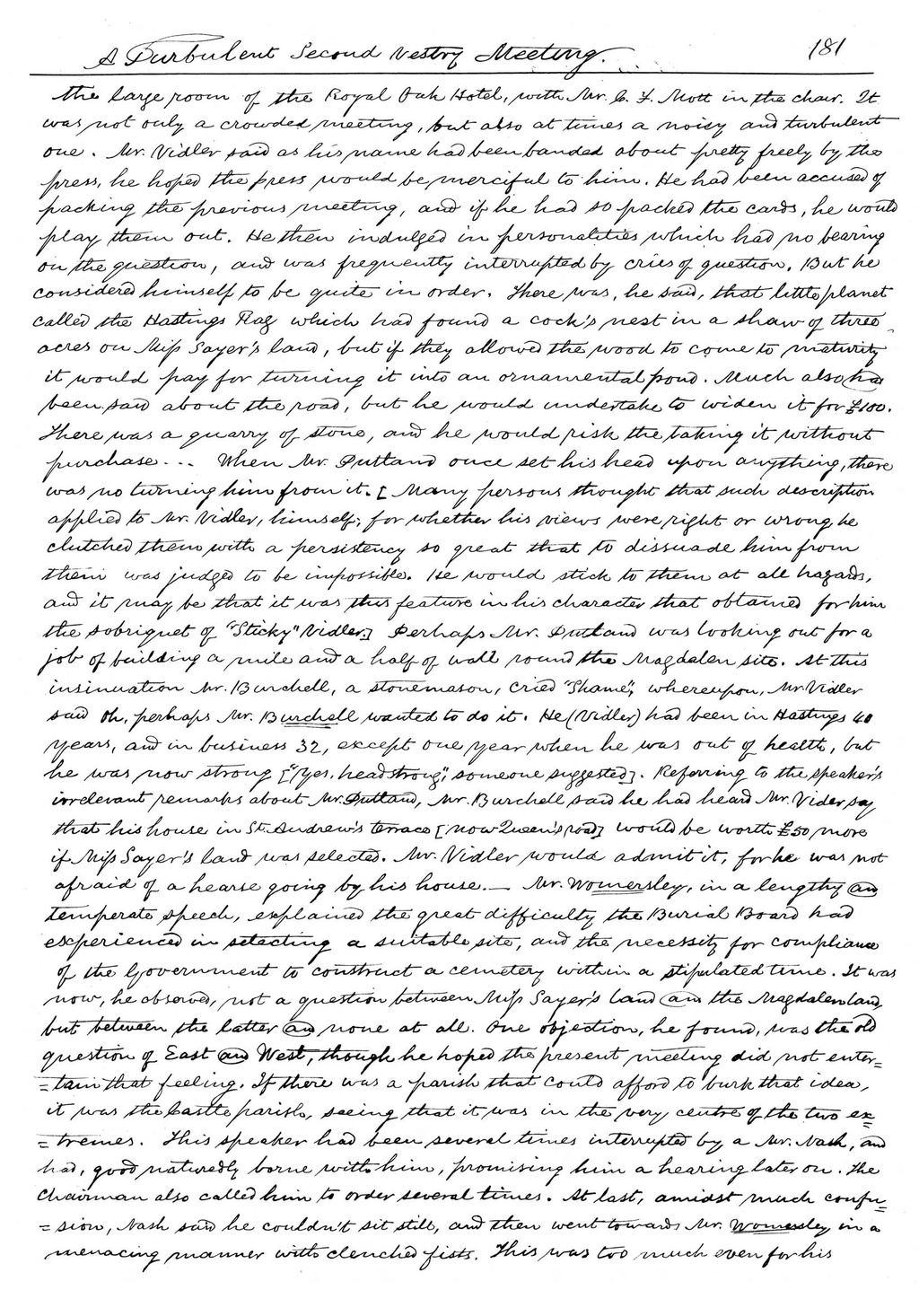