“The Vidlers and the Nicholases might disturb, but they could not prevent, were it not for the absurd provision that not only should the Board agree to a site, but that all the vestries should come to a common consent. This enactment makes the Board a mere committee to the parishes, and is as ridiculous as if the Town Council should be obliged to report to the East and West Wards respectively on the propriety of repairing the Eversfield parade or improving the Tackleway; the East Ward would care very little about the Esplanade, and the West Ward would denounce the Tackleway. It is well for sub-divisions to be represented, but it is folly to let one sub-division have the power of ruling the rest. As the Burial Board now exists, a parish is not only represented, but has the power of speaking for itself, as if a party in a suit should not only plead by his counsel, but also advocate a cause in propria persona.

But though the law be thus faulty, it might have been hoped that the members of the Burial Board would have shewn themselves worthy of legislatorial confidence, and capable of acting together for the common good. And until the recent elections, the Burial Board certainly showed a pretty good animus on the whole, though there were some partial signs of a troublous spirit. But now that we have Mr. Vidler and Mr. Nicholas in its ranks, each looking out for his own parish, the case is less hopeful, and we fear that Mr. Poole is only too correct when he says the Board has got to cross-purposes and is in fact cross-grained.

There is one hope, however – the hope of tonight. Should the Castle vestry rescind the decision now standing on its books, we may heal the memory of the past by the application of that consoling proverb ‘All’s well that ends well’. And we think there are good reasons why the Castle parish should rescind the resolution passed at the recent meeting at the Pelham Arms – a meeting which Mr. Vidler tells us was mainly the result of his own industry. Among the reasons why the Castle parish should rescind the resolution which rejects the report of the Burial Board, we would reiterate for argument – that the Magdalen land is the only site certainly available for the purpose of the general cemetery. If it be rejected in the hope of getting Miss Sayer’s land, the Castle parish must run the gauntlet of several contingencies. As Mr. Womersley has remarked, the Town Council is not compelled to supply the vacancy which the dissolution of the Burial Board would create. But if Mr. Vidler’s second object were gained, and the Town Council were to take up the task of finding a general cemetery, it is still probable that circumstances may induce or compel them to go to the Charity- 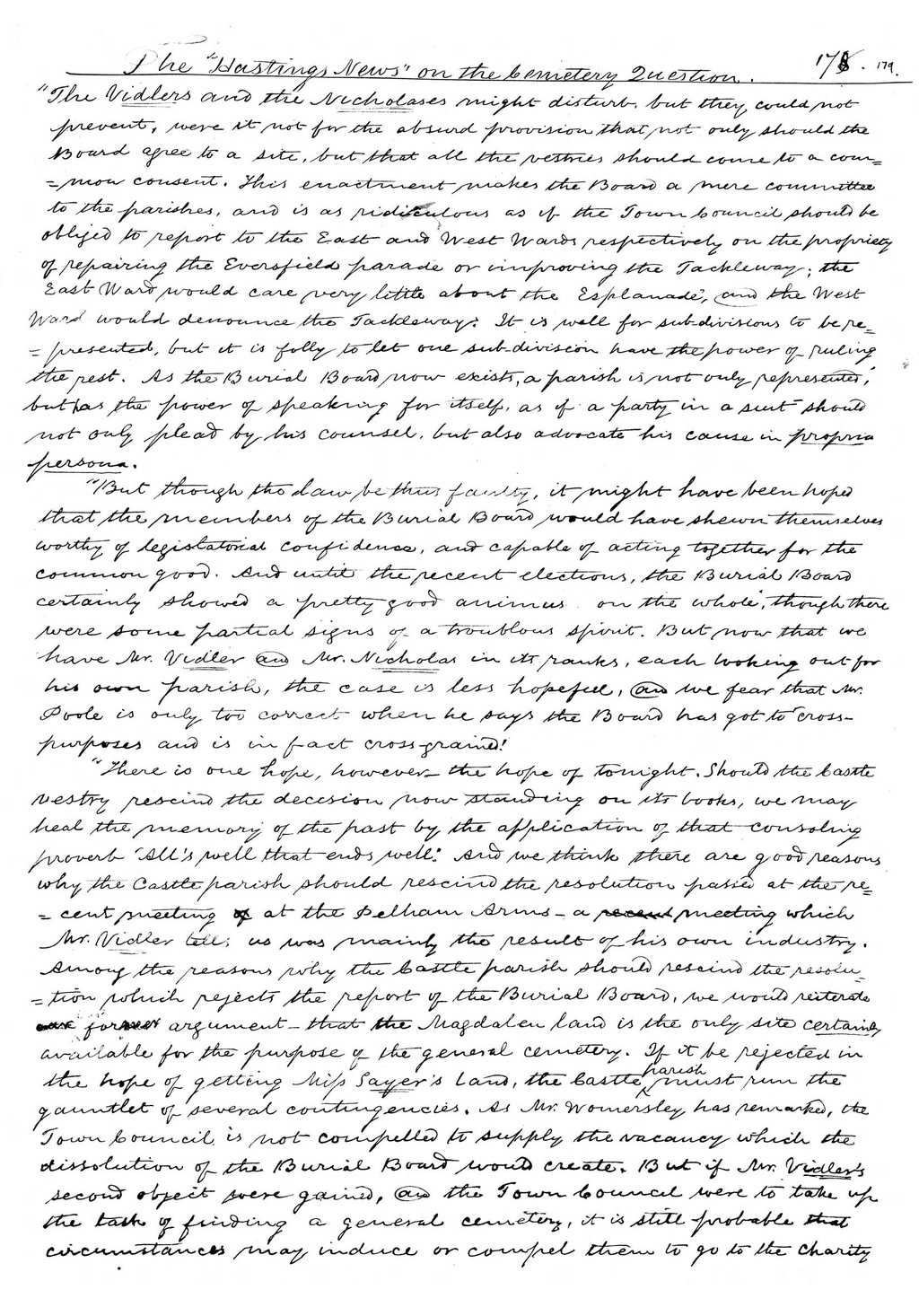