addressed our readers last week, on the subject of the Burial Board, the whole of the six parishes had deliberated on the final recommendation of that Board as to the site for the general cemetery. Five of the parishes had fully approved of the selected site on the Magdalen land, but the parish of St. Mary-in-the-Castle ‘in vestry assembled’, had refused even to ‘receive’ the report presented by the Burial Board. We hinted, last Friday, that the said vestry might not really represent the feelings of the parish, and it would appear that the Burial Board itself took the same view of the matter, for at the meeting of that Board on Friday last, a resolution was passed requesting the overseers of the Castle parish to call a second vestry for the purpose of considering the decision arrived at on the question of the Magdalen site. To this request the parish officers have very courteously consented, and a vestry meeting is to be held in the large room of the Royal Oak Hotel this evening at seven o’clock. The Burial Board have also caused a notice of the meeting to be left at every house in the parish, as it is evident that the ordinary means for making a vestry meeting public are very inadequate, more particularly in the parish of St. Mary-in-the-Castle. As to the propriety of calling a second meeting, we may remark that when the former one was held, the parishes of Holy Trinity, St. Mary Magdalen, St. Leonards and St. Michaels had not met, and their opinion upon the question was accordingly unknown. It might, therefore, have been expected by some parties that those parishes would withhold their assent from the selected site. But as those parishes have now met and consented to the report of the Burial Board, the case rests on a very different footing to what it did before, and is fairly open to re-consideration. The fact that if the Castle parish stands out with a negative the whole affair will be overthrown against the wishes of the other parishes may induce some persons to take a view of the question somewhat different to that to which they before entertained, and, at the least, entitles the matter to a serious and calm reconsideration on their part.
Being desirous of giving honour where honour is due, we cannot but commend Mr. Alfred Vidler for the readiness with which he yielded his approval to the holding of the second vestry. He evidently conceives himself to be acting in the discharge of his duty, and to be upheld by the general voice of his fellow-parishioners. Still, it is true that even conscience unenlightened is apt to mislead. Mr. Vidler seems to be consciously convinced that his first point of duty is to attend to the pecuniary prosperity of the parish which he represents. The prosperity of St. Mary-in-the-Castle is the summum bonum of his policy. By this standard he guages(sic)the report of the Burial Board, and by this rule he seems resolved to act in all questions that may arise in the deliberations of that body. Last week we traced Mr. Vidler’s policy through three stages: how, in the first place, he wanted to get rid of the Burial Board – how in the second place, he wanted to see the Town Council in its room – and how in the third place he wanted to get Miss- 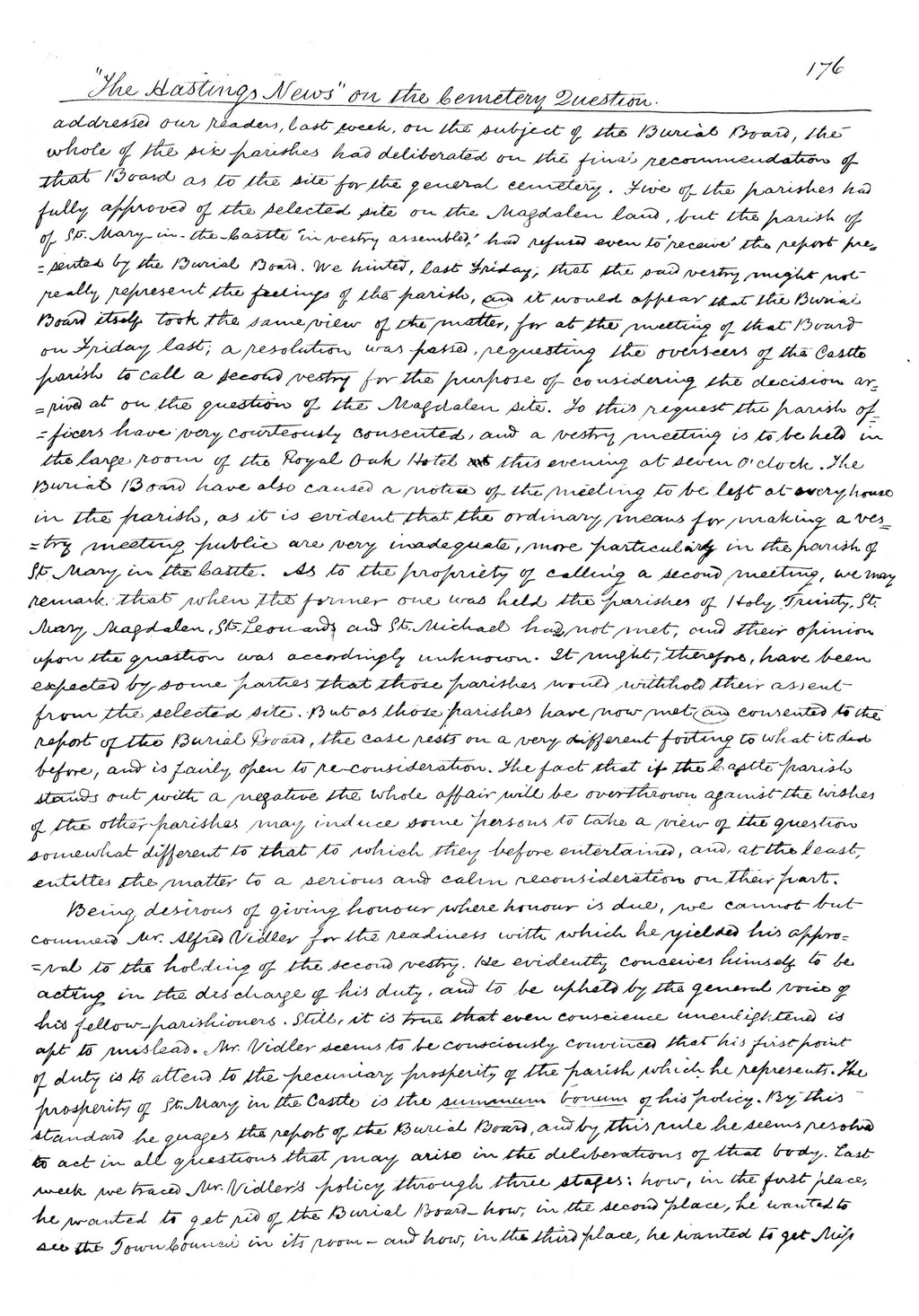