rates, but he meant to keep them as low as possible for the benefit of his fellow townsmen {Hear, hear!]. His motion that the Burial Board’s report be not received was carried by 27 to 4, many of the parishioners present abstaining from voting.

Holy Trinity. At the vestry meeting of this parish, the Clerk (Mr. T. P. Langham) having read the report of the Burial Board, Mr. Ross said that as he had been one of the Burial Board to give his reasons for differing from the other members of the Board. Miss Sayer’s land could be had for £50 an acre less than the Magdalen land, of which latter they must buy four acres more than they wanted, and would have to pay the expense of investment and reinvestment of money. He did not think the Magdalen land so eligible in appearance as Miss Sayer’s land; as it was at the back of houses which had a beggarly appearance. He would move that the Report should not be received. As no one seconded the motion, Mr. Womersley said he should have preferred some parishioner, not a member of the Board, to have moved; but as a member of the Board had taken the initiative on the other side he might follow his example. He did not think Miss Sayer’s land could be brought before the meeting as though they had to decide between two sites. They had to decide between having the Magdalen land or none at all. He would ask the previous speaker if he really meant that the Magdalen land would involve them in the unnecessary expense of £1.300. It had been said that four acres of the ground would not be wanted, but it had not been said that they might be again sold for their full value. Then the only excess in the purchase of the Magdalen ground was the £50 per acre; but the cost of improving Miss Sayer’s land would be very great. Of course the vestry was not bound to support the recommendation of the Burial Board; but he thought that as seventeen out of eighteen on the Board had agreed to purchase the present site and that as the subject had been brought before the Board in a way which could not be brought before the vestry, their opinion should have some weight with the present meeting. A cemetery must be made, and the real question was, would they let the Burial Board have the management, and thus have it very much under their own control, or would they give it up to the Town Council, who would have full power to do what they pleased, without consulting any parish. Mr. Womersley then moved the same resolution as was passed at the St. Clement’s vestry. This was seconded by Mr. Paul Hugh, and carried by 7 votes to 4.

St. Michael’s. At a vestry meeting for this parish, the Clerk (Mr. J. Phillips) explained the report of the Burial Board and after a short conversation, Mr. Hugh proposed the same resolution in favour of the report as had been passed at four of the other vestries, which being seconded by Mr. Tree, was carried unanimously, even Mr. John Smith, Mr. Ross’s neighbour and personal friend, voting with the majority.

“Our Parish”. Under this title a well written and impartial article appeared in the Hastings and St. Leonards News, of March 30th, 1855, which, for the better elucidation of the deadlock of the cemetery movement and of the vestry meeting next to follow is here reproduced. It said “When we- 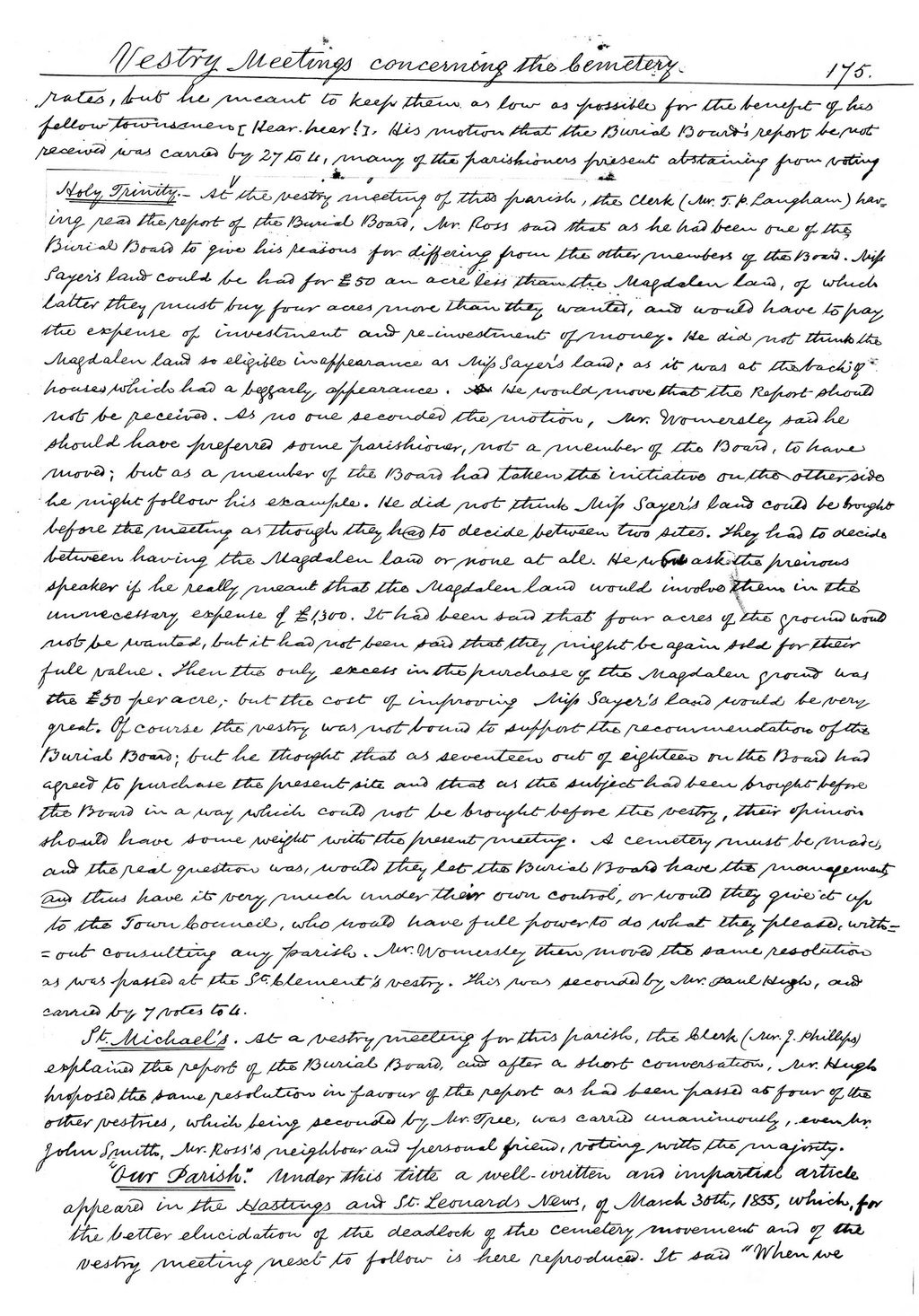