any unnecessary expense. He disagreed with Mr. Vidler’s motion, who seemed to think that because ten acres of Miss Sayer’s land had been talked of, while 15 acres of the other had been proposed, the additional five acres would be of no use, but why only ten acres was thought of was because the Board thought the western parishes had left them, and they would not want so much. Thus the discrepancy was only apparent then as to the price, the difference was £50 an acre, and allowing for the 15 acres a difference of £750, he would ask was it possible to make a good road to Miss Sayer’s land? He thought it impossible. There was no room in the banks for widening the road, and if they did widen it they would have to buy the banks. [And if Mr. Womersley had been in any other than a serious mood, he might have asked, where, afterwards, would young Brett get such luscious blackberries as he did from those hedges, and where, notwithstanding that snakes and adders abounded, would his father, as a blacksmith, be able to cut such excellent “chisel-rods” as was his wont in the contiguous shaw? As to the then existing road - a part of the now Elphinstone road - it was a steep and narrow thoroughfare, known as the Ore Lane, in some parts of which two vehicles could not pass each other]. They never could make the road (continued Mr. Womersley) so good as the Bohemia road. Then, as to distances that point was settled by the comparative measurements. The trustees of the Magdalen Charity did not compel the Burial Board to take fifteen acres; it was the latter who asked for that quantity. At present some of the tenants of adjoining property objected, which would cause four acres to be left out till they consented, but let him put them up by auction, and see what they would fetch [A voice “I know who will give the price for them!”]. He did not think anything would be lost in buying those four acres. But the most important thing was that the burial grounds must be closed on the 1st of May, and that time would soon come. The Burial Board, though they made no pretence to be more sagacious than their fellows, knew more of the particulars than those who composed that meeting. He would ask them them? to go into the matter more quietly and get more intimately acquainted with the difficulties of the subject. He and the rest of the Burial Board had done what they could, and had come to the conclusion that the present was the last stage; and that if they failed in this, the Council must take the matter up. He had hitherto been speaking as a parishioner, but he would now say a few words as an undertaker. The first consideration should be as to the burials of the poor. With regard to the easiness of the approach, there was no comparison between the two places. To the Magdalen Ground a walking funeral was practicable, with a change of bearers, but it was not so to Miss Sayer’s land. Another consideration was the attractiveness of the spot, so that it might be also a fit place for the burials of the rich. They looked to them for the chief source of income. He thought the Magdalen land would be far the most sightly. Mr. Vidler said he had been very much interested in the subject, and the largeness of that meeting was a proof of his industry. He did not care whether he kept off £1 or only 1s. from the- 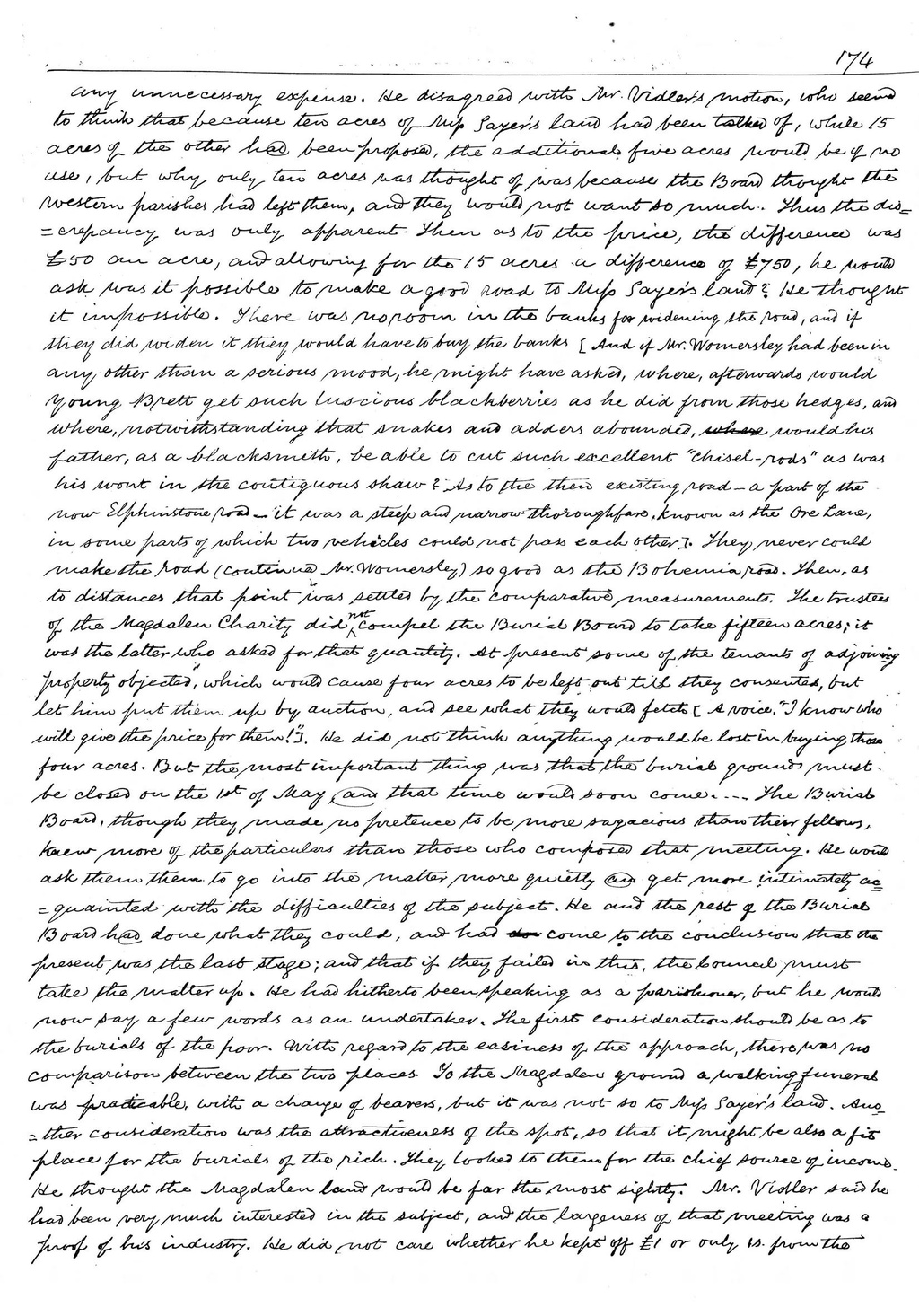