Sayer’s land would require a very large outlay. As to giving £200 an acre for garden ground, he thought more was sometimes given. He would move the following resolution:- “That this vestry approve of the site on the Magdalen Charity land selected by the Burial Board and on the terms mentioned in their report and authorise the Board to spend on the account of this and the other parishes, a sum not exceeding in the whole a sum not exceeding £5,500” &c. Mr. J. Brown seconded and the resolution was carried by 10 to 2.

St. Mary-in-the-Castle. At a vestry meeting for this parish, there were 40 or more parishioners present, Mr. Alfred Vidler having exerted himself to the utmost to pack a meeting for the purpose of opposing the purchase of the Magdalen site. The meeting was an animated one and sometimes noisy. Mr. Vidler said the Magdalen land would cost £200 an acre, and Miss Sayer’s £150, of which they could buy ten acres, whilst of the Charity land they must buy fifteen. It was on behalf of his fellow-parishioners that he opposed the Magdalen site. He would propose that the Burial Board’s report be not received. Mr. Ross said that though he was a member of the Burial Board, he was opposed to the present selected site. Miss Sayer’s was a beautiful place, whilst the Magdalen land was close behind a row of cottages where there were pig-styes, and it was altogether a filthy place [eligible, so said Mr. Ginner - Mr. Ross’s co-objector - for the erection of villas]. Ten acres would be sufficient, but of the Magdalen land they would have to buy four acres more than they wanted. [What would the Burial Board in 1898 say about ten acres being sufficient?] Again the Magdalen land was too far west [Yes, that was Messrs. Ross, Ginner and Vidler’s real objection, as will be seen further on in their treatment of other matters]. He had much pleasure in seconding Mr. Vidler’s motion. Mr. Womersley remarked that Miss Sayer’s land was not before the meeting, and they therefore could not discuss it. As to the dissolution of the Burial Board, that could only take place by every member resigning, and then the subject would fall into the hands of the Town Council. The Clerk explained that every parish must give its approval, and if even the smallest parish refused, they could not buy the ground. If the matter got into the hands of the Council, the majority then would be able to carry any point; but he did not think the Council would purchase Miss Sayer’s land in opposition to the West Ward; and he did not see where they could get another site if they refused the Magdalen site. Mr. Vidler said they wanted to get rid of the present Board and put the subject into the hands of the Council [Unquestionably that was the object of himself and a few others, because they knew that the twelve East-Ward Councillors could at any time and upon any matter out-vote the six West-Ward members. Mr. Womersley said it was evident that the meeting was on the qui vive regarding the proposed outlay, and that they had met thus strongly after having considered the subject for the first time. All ratepayers were, of course, interested in preventing- 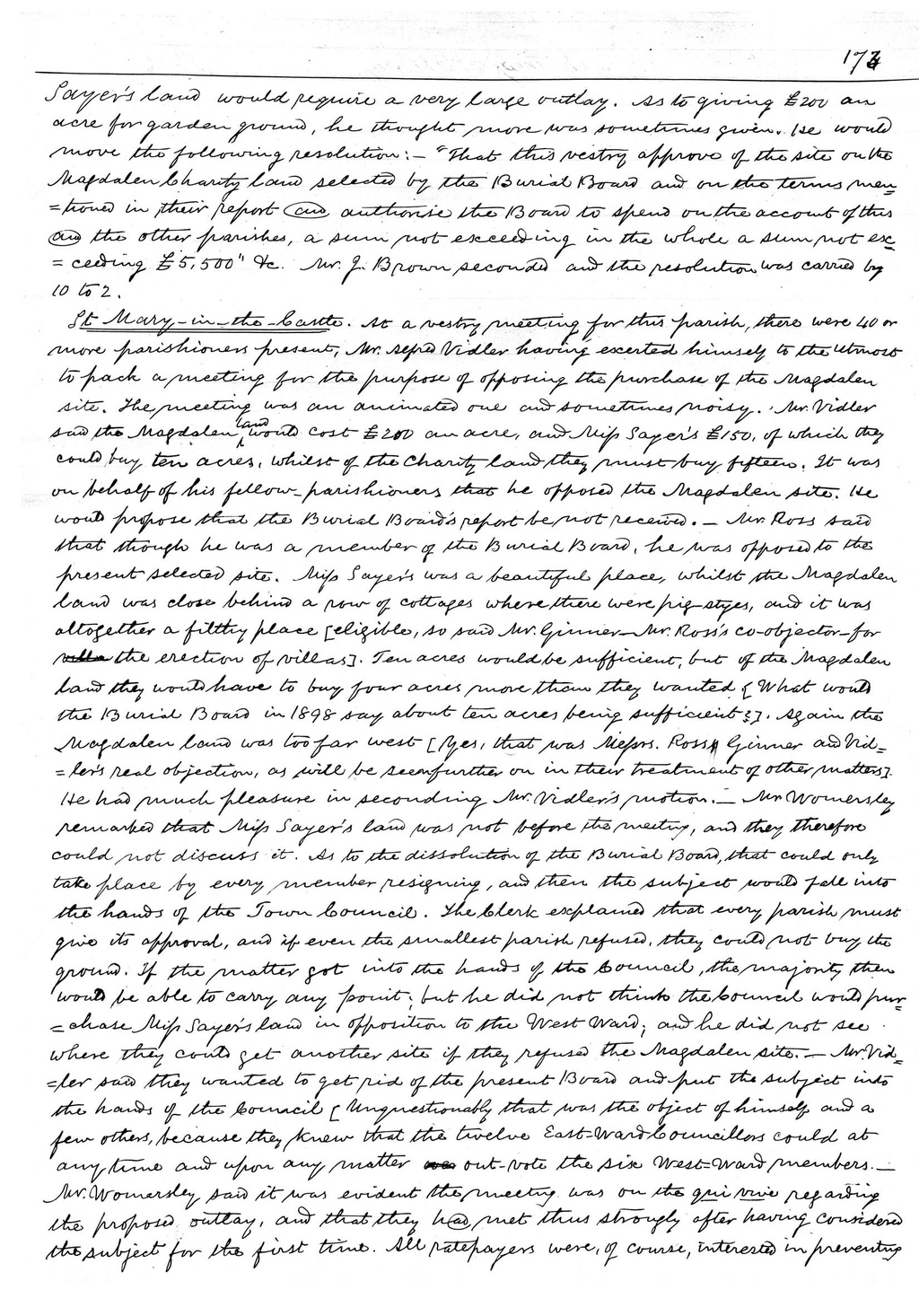