ground, said as a last resource the Board determined to apply to the Trustees of the Hastings Charities for a part of the field at Bohemia, situated behind the houses of Spittleman’s Down and have had the offer of 15 acres of the northern part of the field for £200 an acre. The Board calculate that the total expense of the purchase and attendant charges of fencing, laying out the ground, building two chapels and sexton’s house planting round a part of it, &c. will not exceed £5,500, and that the annual sum to be raised by rate for interest and sinking fund to liquidate the debt - presuming the fees on interments will nearly cover the other current expenses - will be equal to a rate of 1d in the pound upon each parish. Mr. W. Ginner (who had advised the Trustees to demand £300 an acre for the ground) rose and stated several objections to the site. First, he thought that although the price was considered too high, it was not really high enough, as some land in the neighborhood(sic) had been sold for a much higher price. The property would be eligible for building purposes and a good class of villas might be built upon it. As that land belonged to the parishes of St. Clement’s and all Saints, they ought to represent to the trustees not to take such an amount. He knew the difficulty the Board had had, and he knew the question was becoming more difficult, but they should consider that there was another piece of land quite as eligible as the one at present proposed; and though it might be more distant from some of the parishes, that distance, he considered, was not so great as the difference in price. Miss Sayer had offered them ten acres at £150 an acre, and her ten acres would go as far as the proposed fifteen acres, because about four acres of the latter piece could not at present be used as a cemetery. They might certainly let the four acres as garden ground, but £200 an acre ought not to be given for garden ground. There was another objection. They would have to re-invest the money at their own expense whenever it should be required. They would also have to get the consent of the Court of Chancery, and though that Court might be very willing to give their consent, it would cause expense. Mr. G. B. Poole remarked that if the present site were refused, the subject would fall into the hands of the Town Council, who would have the same difficulty in getting suitable land. He thought that, altogether, they would have to incur as much expense in buying Miss Sayer’s land as the present piece. He could not quite understand Mr. Ginner’s remarks about the greatly increasing value of the Magdalen land. At any rate, it would be a long time before it was eligible for the erection of villas. The objection he had expected to meet was that the price was too much. In his opinion it was much more eligible for a cemetery than Miss Sayer’s land, for though that would cost less in the first instance, there would be more walls to build, and a great deal of money would have to be spent in improving the approaches. It had been refused by the western parishes. Some of the other sites which had been thought of were further away and were subject to toll. Mr. Hy. Dunk preferred the Magdalen land, and believed that Miss- 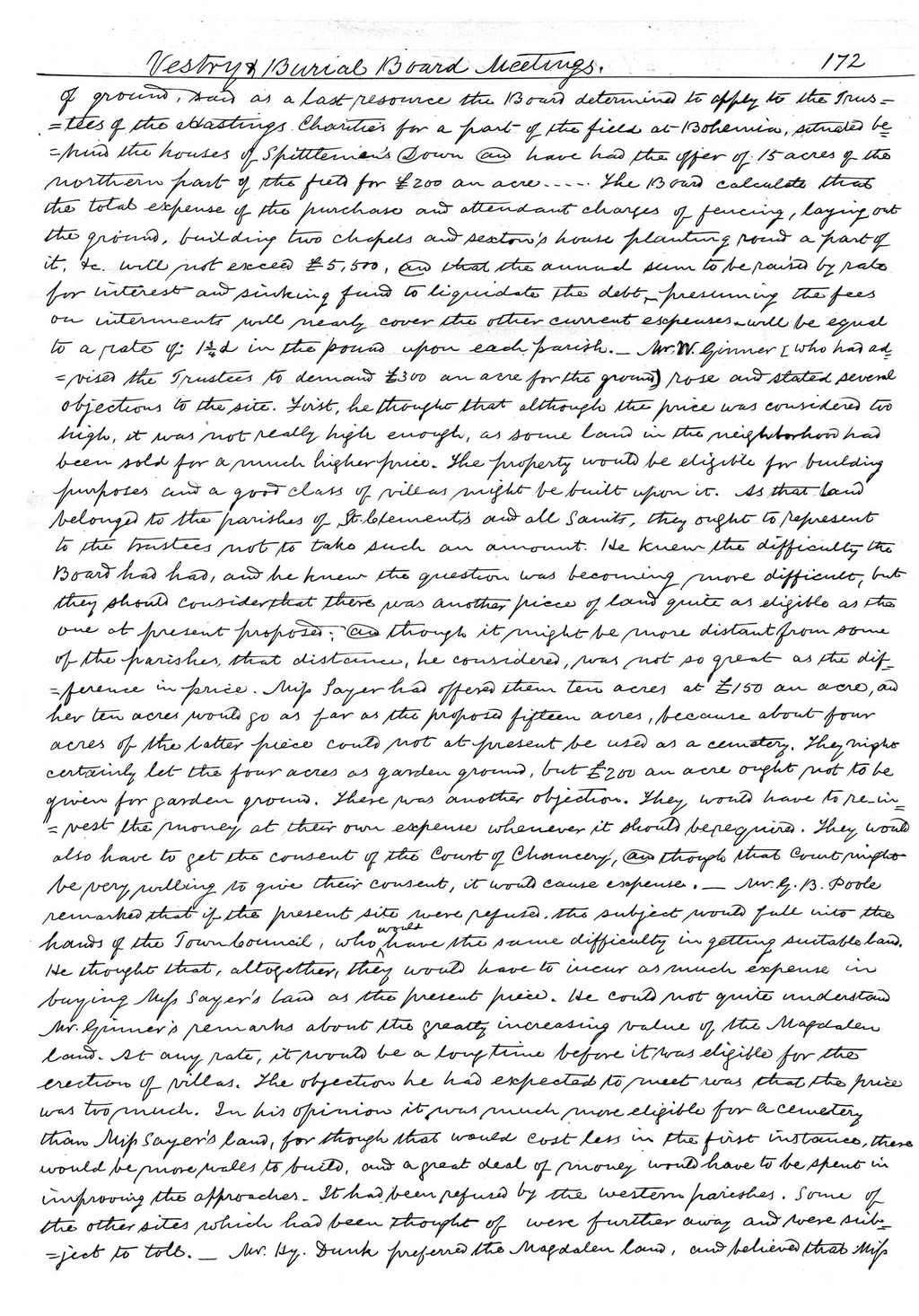