but the question now was whether if they retained his services to carry out the drainage, the public would feel that the money was properly spent. The Surveyor said his taking of levels was correct. He contended that Mr. Vidler owed his seat in the Council to the promises he made to some of his (the Surveyor’s) greatest enemies. Coun. Williams thought it would be very awkward to change now that they had got the borrowed money for the work. Coun. Duke moved as an amendment “That the Surveyor does not enjoy the confidence either of the Council or of the town at large, and that he be requested to resign.” The amendment was carried by 10 to 2.

The Market room was agreed to be let to the Victoria Lodge of Oddfellows on a certain number of days for £15, and for an hour on Sundays to the Rev. J. Stent gratuitously for a short religious service.

Cemetery Plans, three in number, having been received, Coun. Bromley proposed that the one marked “Spes” be adopted, & Coun. Putland proposed that the one marked “Golgotha” be adopted. The first was carried by a large majority, and on opening the envelope, the name was found to be that of Henry Carpenter, architect, Robertson street. It was then resolved to give ten guineas for the accepted design, and to thank the other designers.

The Burial Board in search of a Site

As will have been seen, as soon as the Local Board of Health obtained Government sanction to become also the Burial Board, they at once possessed a power uncontrolled by either the previously appointed united or disunited Boards. The views of the western parishes as manifested at the vestry meetings were shewn in Chapter LIII; and how far those of the eastern parishes were in agreement or otherwise will now appear in the proceedings of the eastern vestries.

The Magdalen Site. At a meeting of the Burial Board on Jan. 12th, it was resolved to accept the offer of the Magdalen Charity Trustees of 15 acres of the northern part of the Great Field at £200 per acre, the Board paying all expenses connected with the conveyance of the land and the investment of the money, also that the Secretary of State be applied to for his approval, and that trial shafts be sunk preparatory of Mr. Grainger’s visit. This gentleman having afterwards viewed the said Charity land, saw no sanitary objection to it, but as certain inhabitants had petitioned against it, if they persisted, the chosen ground could not be used for a cemetery.

St. Clement’s Vestry Meeting. At a meeting held in the parish church, the Clerk (Mr. J. Phillips) read the report of the Burial Board, which after enumerating the many difficulties they had had in the selection of a suitable piece of- 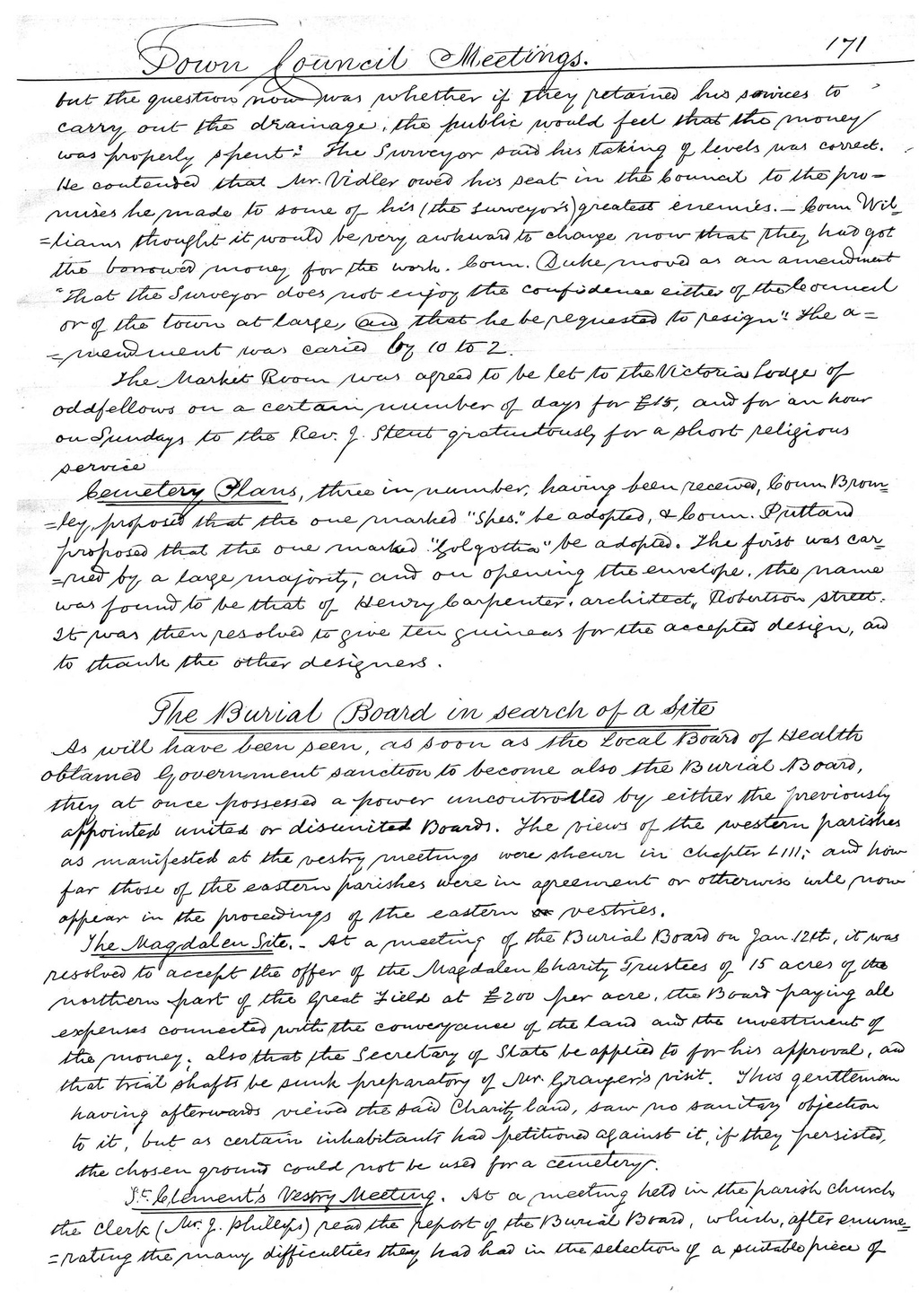