adoption. Coun. Williams would have agreed with Ald. Scrivens in any other case, but now after obtaining Government sanction to the plans and going to an expense of £250 for an engineer to inspect these plans, the Committee said in effect don’t carry them out. Coun. Reeves did not see how they could adopt the report, as Mr. Putland had said before the work was begun he was going to propose an alteration. Coun. Putland explained that the object of his motion would be to raise the level of the George-street drain to prevent the cellars being flooded by the sea. Coun. Ginner said certain houses with low basements would be flooded by a high sea whether the drainage was on a high level or a low one. It was a mistake to suppose otherwise and a mere assertion to say they would not. [Mr. Ginner had probably seen the surface of the street itself several times flooded by a high sea, although he might not have known that in earlier times the road and (on the south side) the footpaths were raised for the purpose of preventing such condition; hence the entrance to a few old houses which still remain, being below the level of the road.] Ald. Clement proposed that the report be adopted, and this was carried by 9 to 6. The question was again discussed at the next meeting, some members advocating a further delay, and others immediate action. One of the latter was Coun. Beck, of St. Leonards, who remarked that they had been five years considering it and had practically done nothing. They talked of having no confidence in their Surveyor, but would the town have any confidence in them?

Want of Confidence. At the same meeting an item on the agenda was to consider the necessity of reducing the Surveyor’s salary [an oblique way of getting him to resign]. Coun. Vidler, a new member, in introducing the motion, said he had no confidence in their Surveyor, and he knew it to be the same with many tradesmen outside the Council, and who would not take contracts under him. He therefore moved that his salary be reduced from £150 to £50. A long letter was read from the Surveyor in defence of his conduct. Coun. Ross said after Mr. Vidler’s statement, the Surveyor ought to have the opportunity to reply. Coun. Ginner did not doubt the Surveyor’s efficiency, but they did not get on well together. He, however, wished that Mr. Vidler’s motion had been such as to give the Surveyor a hint to resign, They knew that Vidler’s motion was one thing whilst he himself meant another. Ald. Scrivens also wished that Vidler’s motion had been a direct want of confidence. It was a want of confidence that led the Board to employ Mr. Braithwaite to test the plans [who approved of those plans in every particular, and declared that he had never seen anything so well performed]. Personally he had great respect for Mr. Gant, and they were not bringing any charge against him,- 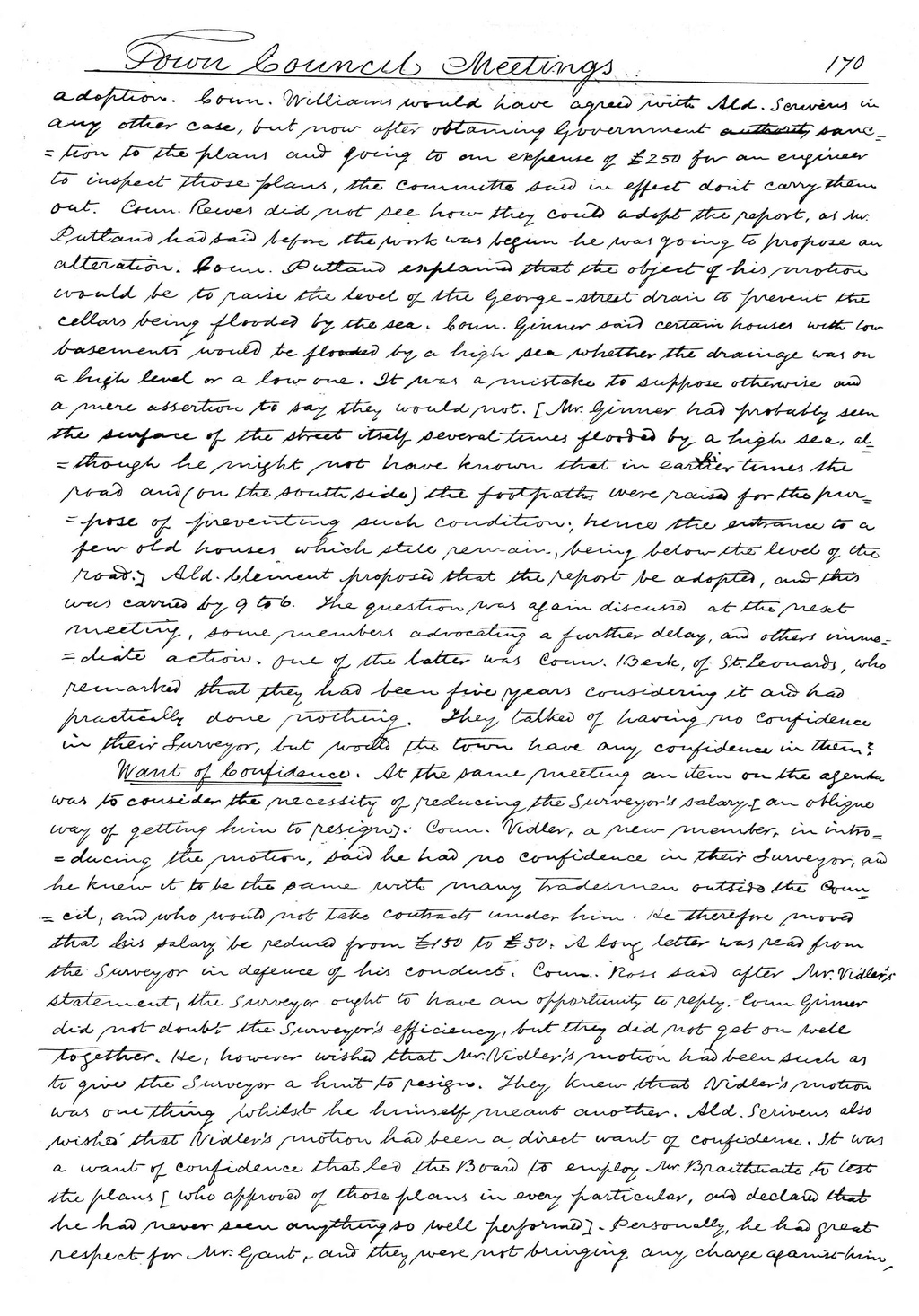