it was the object of some members to throw every object in the way. Coun. Putland replied that the committee could meet as soon as the Mayor liked to call them together. They ought to have an estimate before them, and he did not think the whole of the frontage required a wall like that of Mr. Brisco’s. They might have a nice piece of wall on each side of the gateway, and the rest of the frontage to be a common wall. He moved that the report be received, leaving the adoption to be afterwards settled.

Assessment Returns. At the same quarterly meeting, Coun. H. N. Williams said they would remember it being stated a few months ago that St. Mary Magdalen parish was very much underrated. He found that if the rateable value then stated was correct, the difference threw nearly a penny in the pound on the other parishes. The parish was stated to contain property to the rateable value of £24,000, whilst the borough rate returns showed it to be only £18,000. He would move that fresh returns be made for all the parishes. Coun. Putland seconded it with pleasure. When he mentioned the value of St. Mary’s in the Council, the truth of his statement was doubted, but he took the figures from a paper which Mr. John Phillips laid before the Burial Board in 1854. It seemed to him at the time that aspersions were rather unnecessarily thrown upon him, as he knew he was correct. Coun. Williams did not at the time doubt the accuracy of Mr. Putland’s statement, but he certainly did think that if anyone connected with the Council knew that one parish was rated at £6,000 less than it ought to be he ought to have mentioned it.

Hour of Meeting. Ald. Scrivens remarked that their meetings formerly commenced at 11 o’clock, but now they commenced at two, which was an hour so inconvenient for him that he could attend but seldom. The Mayor explained that it very much facilitated business to have their Clerk present, but his present state of health prevented his attending at eleven. Under those circumstances, Ald. Scrivens was satisfied. Coun. H. N. Williams then moved and Coun. Putland seconded that in future all their meetings except those of the Watch Committee, commenced at three o’clock. Carried.

The Drainage. A lengthy discussion ensued on the production of the Roads Committee report which recommended the omission of several sewers in the proposed drainage of division A, the existing drains in certain districts being deemed efficiently applicable to the general plan. These omissions, the clerk said did not require Government sanction. Coun. Bromley remarked that the report was a lengthy one, and required much consideration; he therefore moved that it be received and referred back to the Committee. Ald. Scrivens thought that after the Committee had taken so much trouble in deliberating and drawing up the report, and since the Board - who could not know so much about it as the Committee - had no real objection to the report, they ought not to hesitate about its- 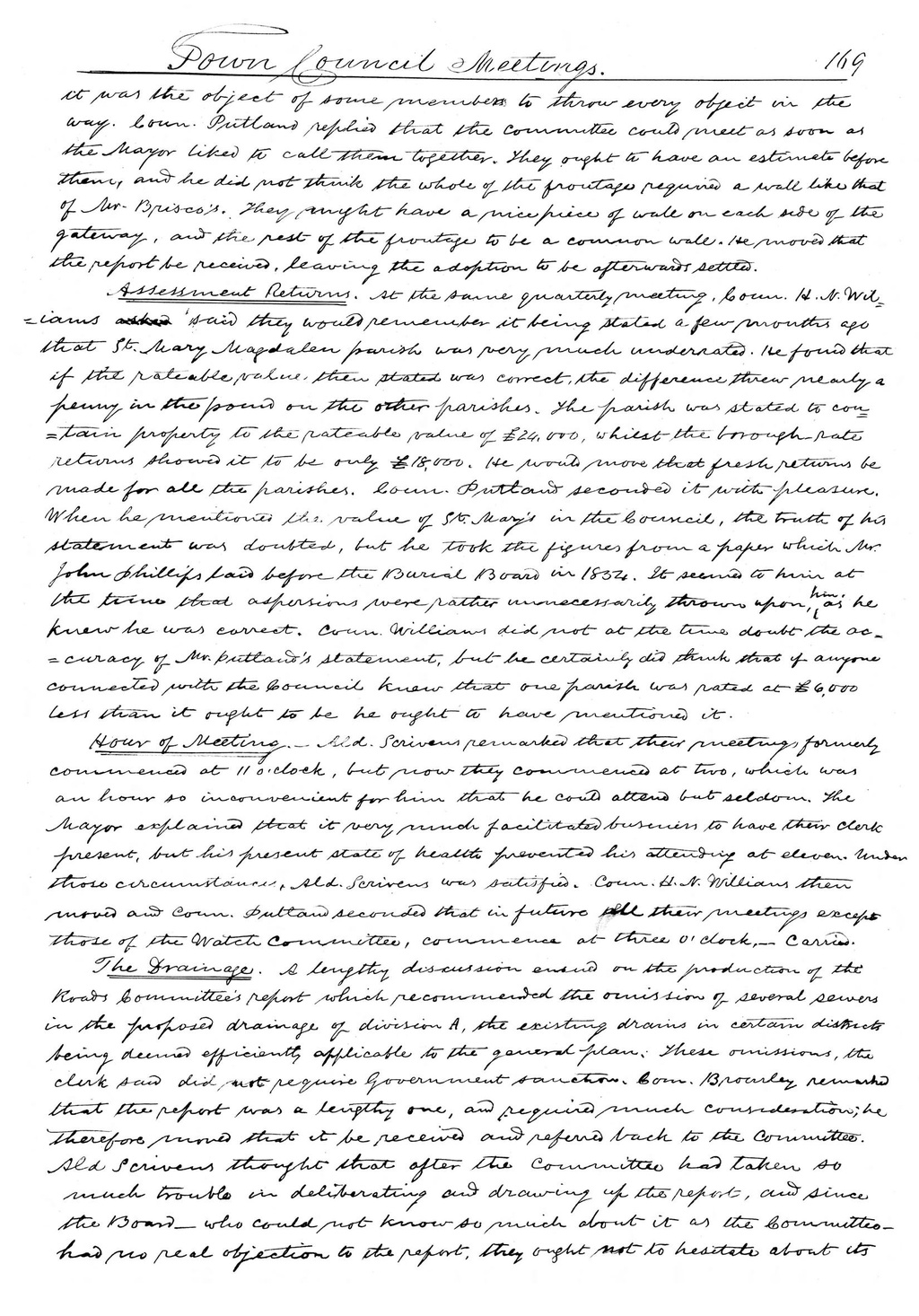