the Burial Board reported that Mr. Grainger, from the Secretary of State’s office had visited and approved the site; that Lady Elphinstone withheld her consent for the cemetery to be within 100 yards of her entrance lodge (which affected two acres where graves could not be made, but which could be otherwise utilized); that £770 would have to be paid to Mr. Shadwell on completion of the purchase; that for such purpose, the Council could borrow £1,000 from the Local Board; and that Messrs. Masters, landscape gardeners, of Canterbury would lay out the ground for £220. A long discussion took place on the last item, in which Coun. Putland advised caution. He urged that the Council has, or ought to have, men on their regular staff capable of such work. He did not want to see money fooled away in running hither and thither to do their work. He moved as an amendment that that part of the report be omitted. This was carried by ten votes to six.

Election of Mayor. At the meeting on Nov. 9th, Alderman Rock proposed Ald. Ticehurst as Mayor and as a gentleman who had filled the chair before to their great satisfaction. Ald. Clift seconded with great pleasure and expressed his admiration of the conduct of Mr. Ginner the retiring Mayor. The new Mayor in returning thanks, said he accepted office in deference to their wishes, and promised that although his time apart from other duties was limited, whatever opportunities he had should be at their service. The ex-Mayor, in retiring from the chair, hoped that he had redeemed his promise of not allowing the office to suffer in dignity or usefulness in his hands. Eulogistic sentiments were then expressed by Coun. Bromley, and Ald. Scrivens of the admirable manner in which Mr. Ginner had performed the Mayoral duties.

Enlarged Burial Board. At the same meeting the same seven names on the Burial Board were retained and the following were added:- Alderman Rock, and Councillors Picknell, Beck, Gutsell, Vidler, Austin and T. B. Williams, making with the ex-Mayor a total number of fifteen. Fencing the Ground. The Committee recommended a stone wall to be erected along the road side of the cemetery similar in masonry to the Coghurst wall, and that a stone wall of a lesser size be carried round the other part of the ground, diversified by piers or iron railing. A long discussion ensued, in which Coun. Putland thought now that they had an enlarged Burial Board the report should be referred back to the same. They ought to have an estimate of the cost of such a wall. Coun. Ginner said when the report was drawn up there were only himself (as Mayor) and Messrs. Bromley and Neve present, and Mr. Neve hastily and roughly estimated the cost at £570. The Clerk said if it were referred back to the committee there would be a delay of two months. Coun. Bromley believed-

A co-opted member of council elected by his peers on the council, second in authority to the Mayor. 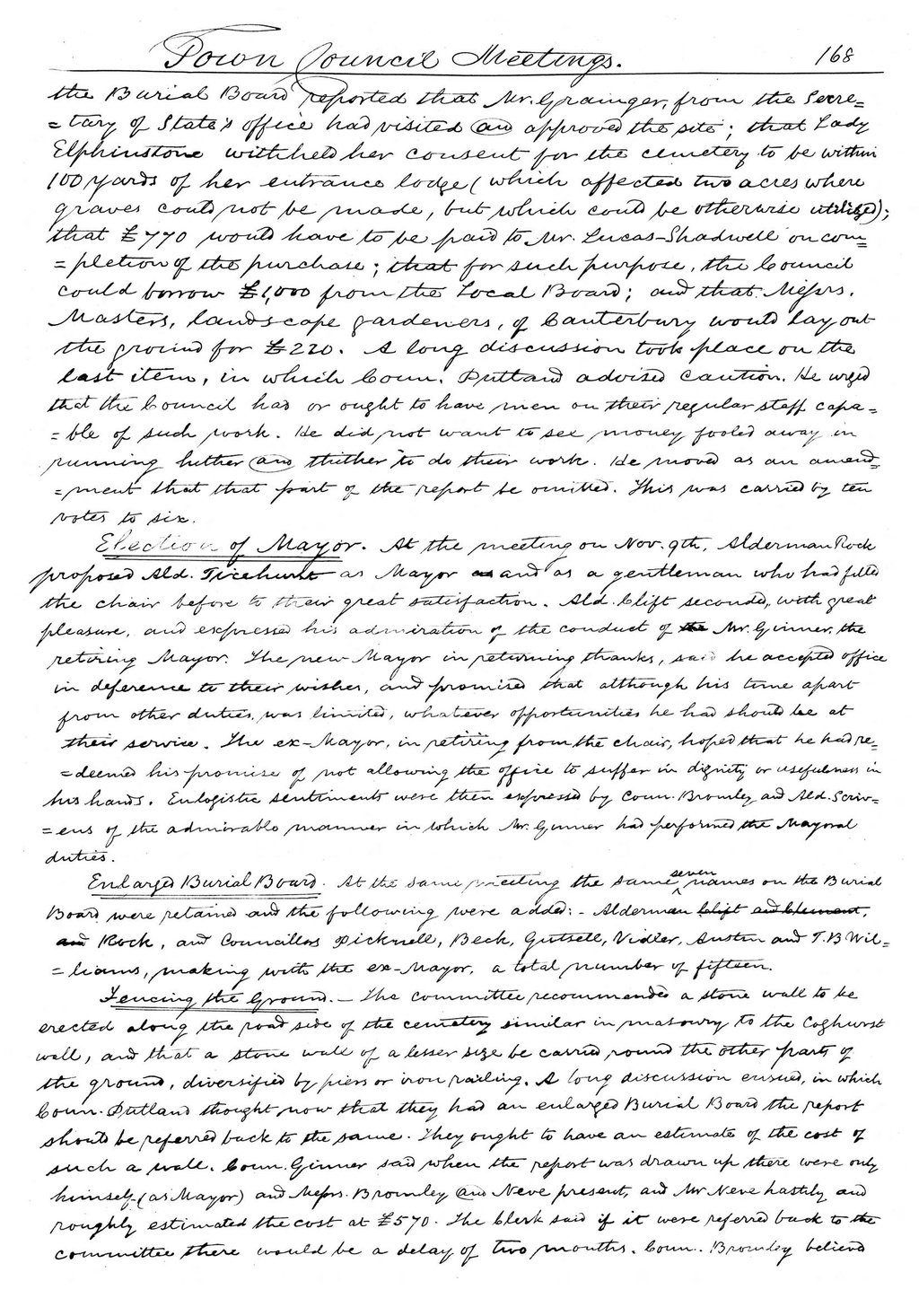