if the mile or thereabout from the Fountain to the Saxon be added to Mr. Banks’s figures, as well as the distance from the west end of the site to where the entrance now is, it becomes apparent that Mr. Putland was not inaccurate. This great distance from St. Leonards was and still is a great inconvenience, but apart from that, the site had advantages over most other sites that were offered, not the least of which was its greater area and its immensely lower price. It must now be acknowledged that the smaller quantities of 7, 10 or 15 acres would soon have become inadequate, and a new difficulty of securing land for a second cemetery might have arisen.

Corn Dealers’ Memorial. The Town Council having declined Mr. West’s tender for the hire of the Market room, and decided to manage it themselves, the following memorial was sent to them. “Gentlemen, An opportunity now offers to place the Market Room on a sound and business footing. We, the undersigned, as buyers of corn, &c. take the liberty of sugesting(sic) to you certain propositions for the future management and well-being of the Hastings Corn Market. That the Market-room be opened every Saturday at 3 o’clock and closed at 5 o’clock from the 29th of September to the 25th of March; and at 6 o’clock from the 25th of March to the 29th? of September. That stands be provided by the Council, and placed in rows, numbered regularly and marked with each person’s name, who shall pay yearly for the same any sum not exceeding £1. That the Council discourage all attempts to introduce smoking and drinking during the before-mentioned hours of business. If these suggestions meet your views, we shall be prepared each to take a stand. The millers and corn dealers who signed the memorial were William Crisford, Andrew Amoore, Wm. Adams, Michael Porter, John Wilmshurst, Boykett Breeds, Edgar Stonham, S. Godden & Son, J. Stubberfield, Hilder & Smith, Fredk Wrenn, Boorman & Green, and Robt. Kenward. It was resolved by the Council at their meeting on Nov. 2nd, on the motion of Ald. Clement, to accede to the wishes of the memorialists, and that the Market room be open all the year round on Saturdays from 2 till 6. During the discussion it was stated that since the Council had taken the management of the room into their own hands they had derived from it a little less than a sovereign and lost a quarter of a year’s rent.

Government Approval of Site. At the same November meeting- 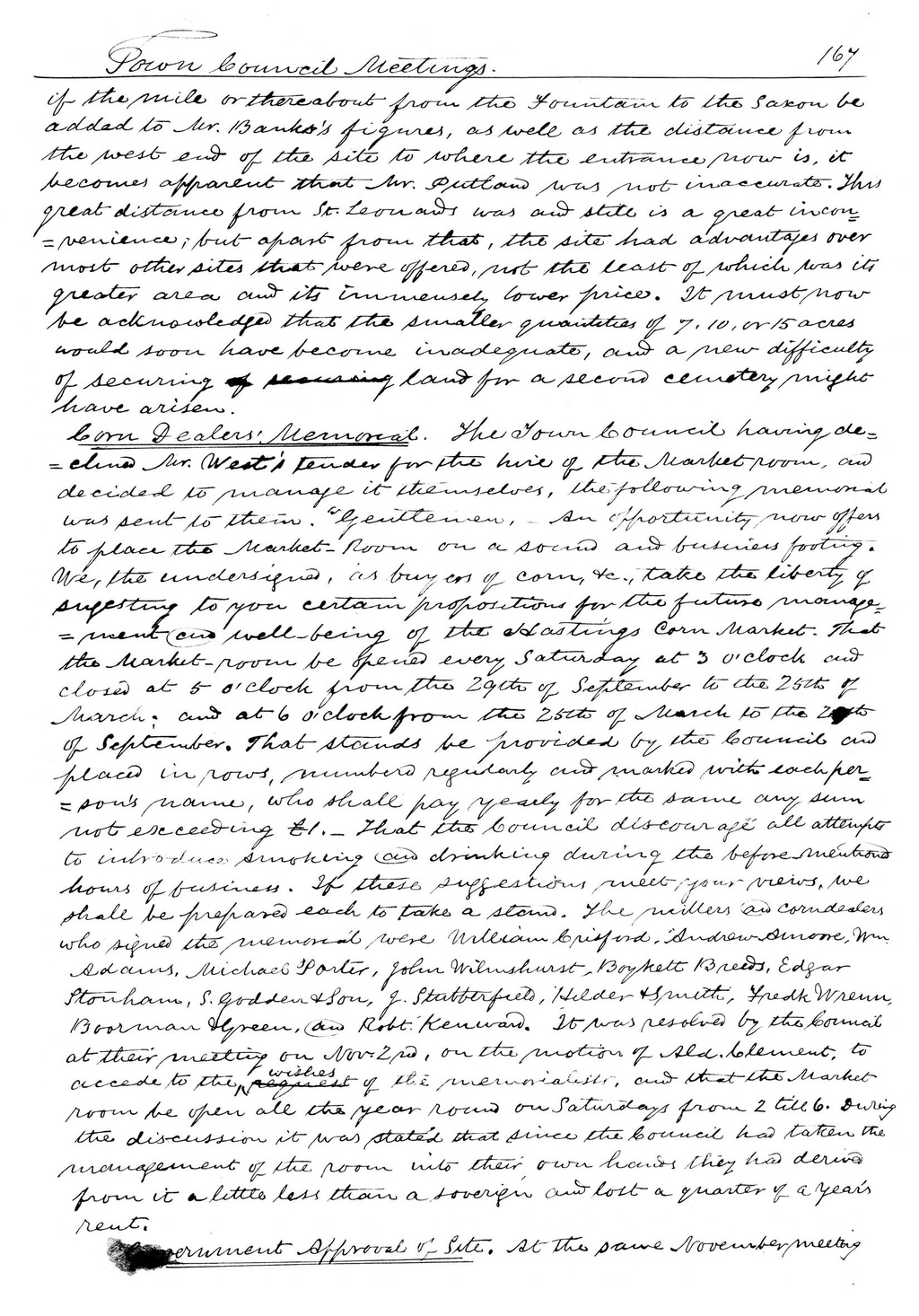