The Obstructed Footpath. In resolving to adopt the committee’s recommendation to open and repair the obstructed footpath over the West hill at St. Leonards, Coun. Putland said there was a hole 67 feet deep, and he never saw a more brutish way of stopping a footpath. This was a track that had long existed over the hill to Bopeep.

A Cemetery Site at last. A special meeting was held on the 18th of Sept. when the Burial Board committee reported that they had had several offers of land and had inspected the same in Hollington, severally belonging to Mr. Farncomb, the Rev. Mr. Hooper and Mr. Birch; also at Ore and Fairlight, severally belonging to Lady Waldegrave and Mr. Lucas Shadwell, which latter had offered to sell 21 acres of pasture land on the north side of the London road called Gateman’s Field, with immediate possession for £40 an acre. Coun. Bromley moved the reception and adoption of the report and he did so with peculiar pleasure, as he saw a probability of having the question speedily settled. Coun. Ross, although still in favour of Miss Sayer’s land, would second the motion. He thought all would agree the site to be exceedingly beautiful. Coun. Picknell did not deny the picturesqueness of the site, but thought they should have a cemetery between the two Wards. Coun. Putland entered into a long speech, in which he said there was a heavy tithe rent on Mr. Shadwell’s land whilst on Mr. Hoopers there was not any; also that the distance from the West Ward was very great, and difficult to reach, as it was nearly the highest land in the neighborhood(sic). People from the west end of St. Leonards would have to travel nearly five miles. Ald. Scrivens would rather that the ratepayers had retained the cemetery in their own hands, and that the spot selected had not been so far off, but it was much cheaper than any other land that was available. Ultimately, the motion was carried by 14 to 2, and Ald. Scrivens moved a vote of thanks to Mr. Lucas Shadwell for the prompt and liberal way he had met the wishes of the Council. Coun. Ross also moved a vote of thanks to the Countess Waldegrave for her offer, and for having done all she could to assist the borough.

Measured Distances. As measured by Mr. J. Banks, the distances to the selected site for the cemetery were;

When Mr. Putland stated that from the western part of St. Leonards the distance would be nearly five miles his statement was derided, but 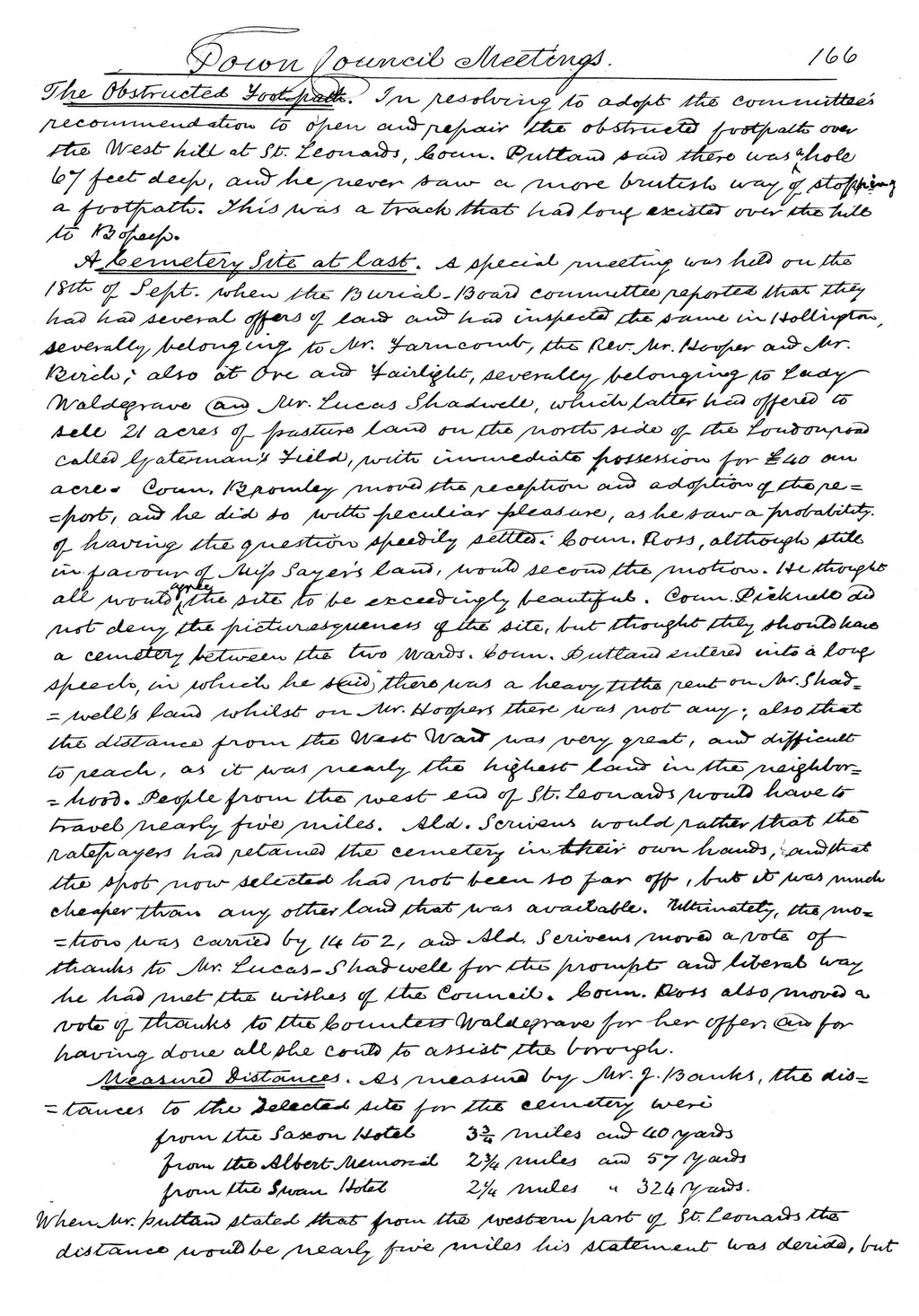