six month’s notice; also to decline the offer of £5,000 at 5 per cent from an annuity office, the money to be repaid in 30 years; but to refer to committee the offer of £5,000 by a gentleman staying in Hastings, the loan to be for ten years. Further resolutions, after considerable discussion were as follows:-

A Drain to be made at the back of Bohemia terrace, to form part of the general drainage, and from the west side of Warrior square on the same condition.
The Stoppage of a path over West hill at St. Leonards to be the subject of enquiry by committee.
No Bathing to be allowed between the Priory water and the St. Leonards Archway from 8 a.m. to 9 p.m. except from a machine.
Twenty-five Pounds to be paid towards the expense of the new Sheepwash bridge, built by the Commissioners of Levels, it being understood that St. Leonards would also contribute something.
The Council a Burial Board. At a special meeting on the 17th of August, Coun. Bromley said, as they were now constituted a Burial Board, he would move that seven form a committee to look for a cemetery site. The seven members chosen were Ald. Clift and Clement, and councillors Putland, Williams, Bromley, Ross and Neve.
Railway Reply. The South Coast Railway Company’s reply to the memorial of the Council was that, a few years ago, the Company ran trains at similar times and speed as now asked for, the result of which was so unprofitable that they were obliged to be given up. The South-Eastern made no reply.
“Smiler” to be sold. It was resolved that the horse “Smiler” be sold, he being 23 years old and unfit for work. [What a splendid prospect for Smiler’s new master!]
Seat on the Parade. Permission given to Mr. Parks to place a seat on the parade in front of Adelaide House, but not to put the name or number of the house on the seat, that being, according to Coun. Ross’s view, a “selfish reason for placing the seats there.”
Not to be had. The Clerk reported that the gentleman in Hastings who had offered the loan of £5,000 had died that morning, and the negotiations were therefore at an end.
Another Offer. At the September meeting, a loan of £5,000 for drainage purposes at 4¾ per cent, for 30 years, payable back by thirty annual instalments, was declined.
Market Tolls. The tender of £183 10s. for the Market tolls was accepted in preference to the one of £180 by Mr. Saunders. Mr. Smith was a Canterbury man and Mr. Saunders was of Hastings 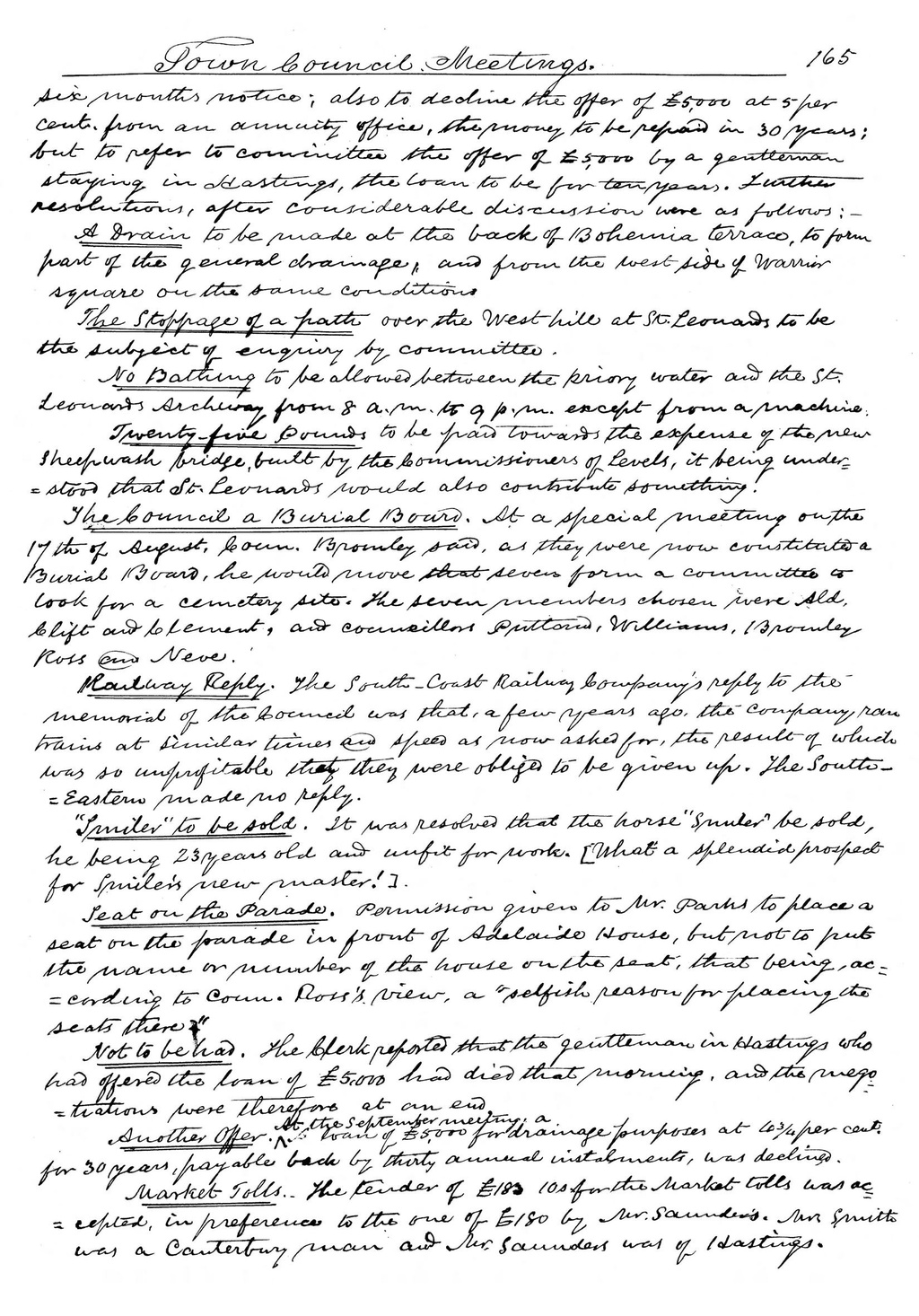