the latter (in 1815) that Bounaparte(sic)entered Paris on Monday morning at 6 o’clock, and that previous to his arrival the Napoleon colours were displayed on the ramparts. He also advised the Mayor of Hastings of the prudence of all English people to return immediately to their own land.]

The Cemetery Question. At the same meeting (July 6th) it was resolved on the motion of Couns. Ross, that a committee be formed to assist the Clerk in drawing up a reply to the petitions of All Saints’, St. Mary Magdalen and St. Leonards to be excluded from any cemetery provided by the Council.

Charities Trustees. A letter having been received from Mr. Young that an application had been made to her Majesty’s Attorney General for sanction to the Master of the Rolls for the appointment of nine additional trustees to the Hastings Charities, Coun. Ross was sorry that the trustees should have suggested to the authorities in London that magistrates should be trustees. The trustees, he contended, ought to be practical working men. He considered the Charities had been wofully(sic)neglected and infringed upon. [Had Mr. Ross forgotten that some of the magistrates had worthily risen to that position from their once lower status of working men? What was Mr. John Mannington, J.P. but a practical ironmonger before his retirement? What was Mr. Ginner, one of the best of Mayors, but a working man in earlier life, under Mr. Boykett Breeds? What was Mr. H. Winter, a Mayor and J.P. but a working printer? and What was Mr. Ross himself (although destined to be several times the chief magistrate) originally but a working painter, the son of a practically working gunner. All honour, I would have be paid to such men, but that is no good reason for objecting, in combination, to gentlemen of intelligent influence, with the necessary leisure].

Railway Matters. At the sitting of the Council on Aug. 3rd, Mr. Bromley stated that Hastings was unusually lacking visitors and he would move that the railway companies be memorialized to give alternately a cheap Saturday to Monday train. Ald. Clement remarked that if Hastings had only one railway, it would get more accommodation. At present all the proceeds of the traffic to Hastings was divided: hence, each company gave more facilities to those places where the whole income was its own. What Hastings wanted was a quick train to leave Hastings at 8 a.m., and get to London at 10, and one to leave London at 4 p.m. and arrive at Hastings at 6. Bromley’s motion was carried.

Drainage Loans. It was resolved to accept £500 from Miss Jane Sayer at 5 per cent, to be repaid in one sum at any time, with- 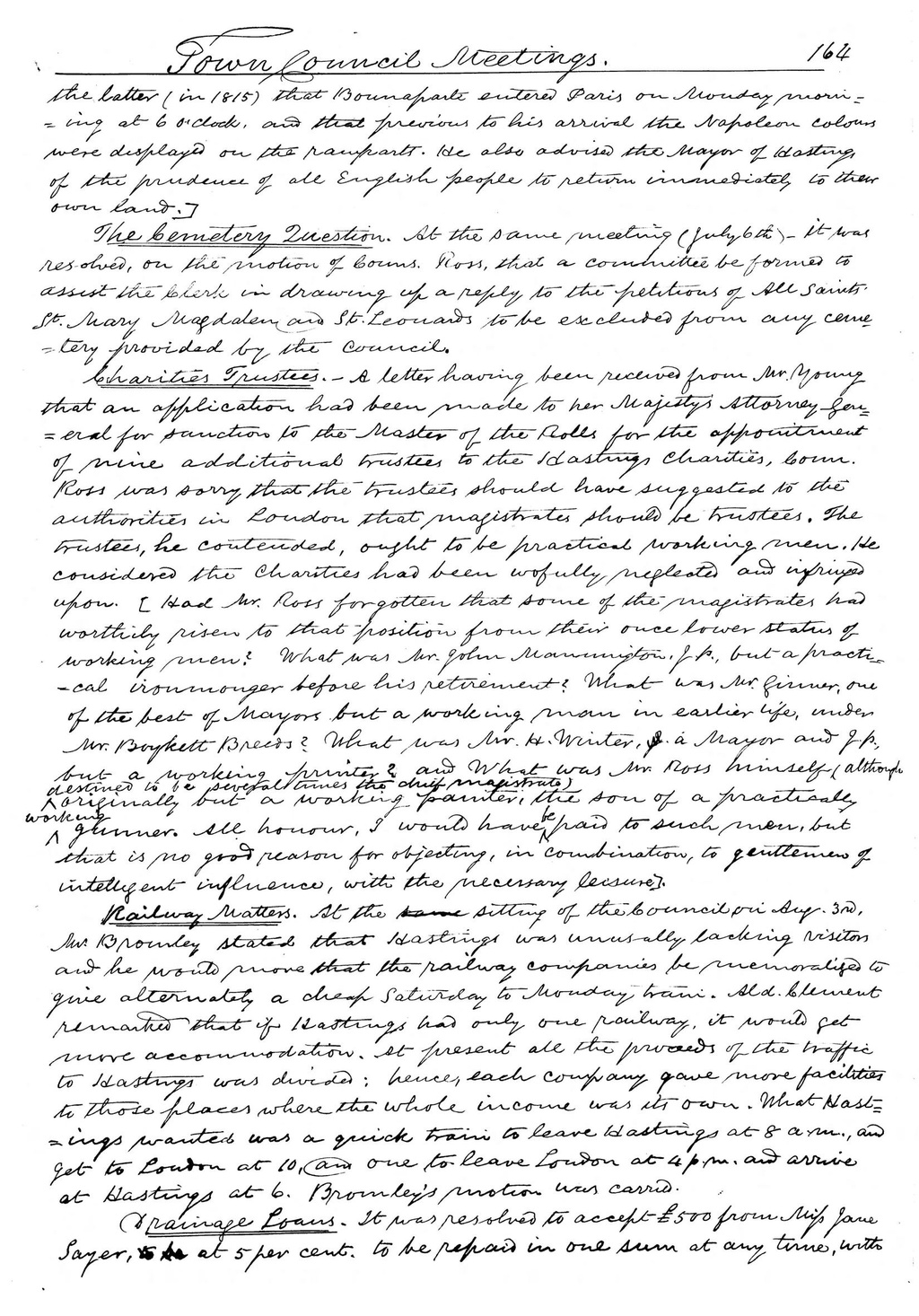