Bill Posting. A letter having been received by the Council from Mr. Montgomery Holland and Mr. Samuel Green, complaining of the posting of bills in front of the high pavement at 115 to 117 High street, Mr. Cox explained that the wall was public property, maintained at the public expense, and that he had posted bills there for 38 years.

Wellington Square. A memorial having been received from Mr F. Smith and other property owners, for the Council to take the said square under its jurisdiction, the same was agreed to.

Hastings and St. Vallery. At the meeting of July 6th, the Town Clerk (Mr. Shorter) read a letter which he had prepared in reply to one from the Mayor of St. Vallery to the Mayor of Hastings. The chief points in this reply were

“As regards the capabilities by sea in connection with the traffic of passengers and merchandize destined for France or vice versa, we have no pier or harbour. Ours is an open roadstead. The spring tides ride 22 feet and the neaps about 11 feet. The low spring tide ebbs out on a sandy and rocky shore to about four or five hundred feet from high-water mark. All landing and embarkation of goods must be affected by boats, which the surf would not allow at all times without danger. I do not consider that any steamer could embark and cross in one tide from Hastings to St. Vallery. We have no public warehouses for goods here nor bonding stores. The two principal termini are about one eighth of a mile from the shore. It is not likely, even if practicable that either railway company will ever desire to make a continental communication between London and Paris through Hastings. One possesses or uses Newhaven as a port of embarkation and the other, Folkestone and Dover; and the whole interest of those companies is therefore thrown into their respective ports. The kind feeling you have expressed as to the cordiality now existing between the two nations is deeply felt and reciprocated here. Permit me, sir, to convey to you the kindest expression of the Mayor of this borough.
I have the honour to be

Coun. Ross remarked that it was the first time there had been any public communication from St. Vallery to the town since the battle of Hastings, and he was sorry the letter could not receive a better response. [I trow this statement is hardly capable of proof; but whether so or not, I have referred in an earlier part of this History to a communication from the Mayor of Dieppe to the Mayor of Hastings, wherein the former acquainted- 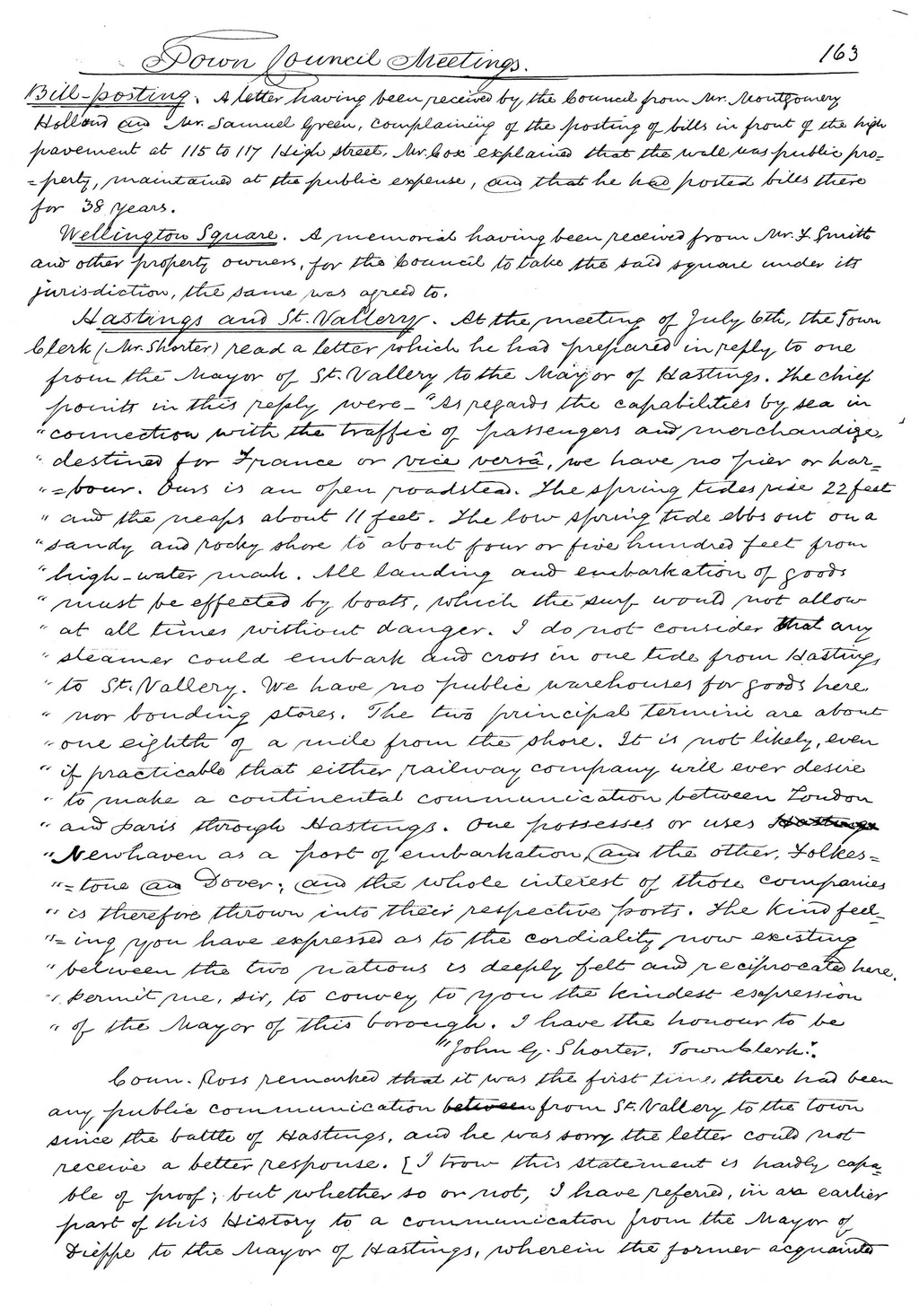